Apparently, some good news from the Santorum family:

PUNTA GORDA, Fla. — Rick Santorum said Sunday night that his daughter Bella has experienced a “miraculous turnaround” since being diagnosed with pneumonia earlier in the weekend.

On a telephone town hall for Florida voters, the former Pennsylvania senator said doctors predict that the 3-year-old will be released from the hospital two to four days from now.

“Life for the Santorum family has improved dramatically since this afternoon,” he said. “We’ve still got a long way to go, but she’s without a doubt turned a corner.”

Santorum canceled three Sunday campaign stops in Florida so he could care for his daughter. He announced on the call that he plans to return to the campaign trail on Monday if Bella continues to improve. But he was noncommittal about whether he’ll return to Florida, and specifically whether he’ll attend a scheduled event at a Boca Raton synagogue on Monday morning.

“We’re going to get back on the campaign trail probably later tomorrow,” he said.

Santorum suggested that he’ll head instead to the Midwest “and start campaigning in the next set of states as we move this campaign forward.” This tracks the campaign’s decision to look past Florida with Santorum placing third in the polls there.

Much like Ron Paul, there’s little reason for Santorum to return to Florida at this point. However, it’s good to hear that his daughter has apparently gotten beyond her health scare. 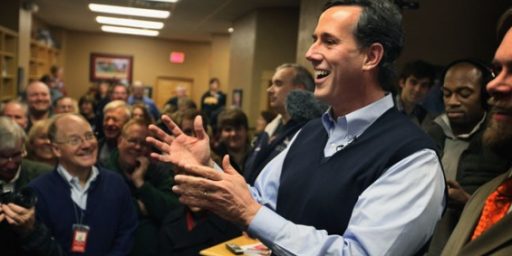