Would a similarly-situated woman be getting such over-the-top coverage? 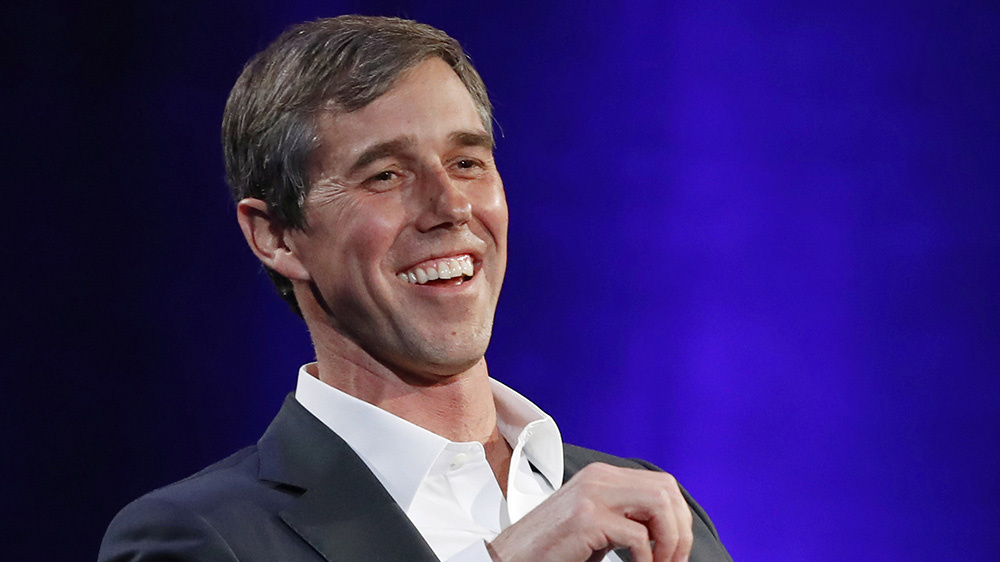 A Twitter meme from a couple days ago is now gaining legs in longform.

Natasha Korecki in POLITICO (“‘Not one woman got that kind of coverage’: Beto backlash begins“):

Since announcing his 2020 run, Beto O’Rourke has made one visit to Iowa, where he vaguely outlined his positions, including from atop a cafe counter.

Guess who’s getting the star treatment.

The breathless, sweeps-like cable television coverage that greeted the former Texas congressman’s first campaign events stunned and frustrated many Democratic operatives — particularly women — who viewed it as an example of the double standard at work in the historically diverse presidential field.

To them, O’Rourke, a white, male candidate had already been ordained the next sensation, his entry into the race greased by live television shots and O’Rourke-centric panels.

And that was after the national press swarmed him in El Paso during a recent Donald Trump appearance there, after O’Rourke graced the latest Vanity Fair cover, and after Oprah Winfrey, who had her choice of accomplished women candidates to feature on her program, instead zeroed in on the white guy from Texas.

Warren is by any measure more qualified for the Presidency than O’Rourke. Still, it’s arguable that she’s an old story—and that she had a turn in the spotlight of her own and simply failed to capitalize on it by running in 2016 and her 15 minutes has ended. Then again, there’s no Hillary Clinton in the field this time.

“I feel like the media is always captivated by the person they seem to think is a phenom: Bernie. Trump. Beto. But they always seem to be white men who are phenoms. In a year where we have more choices than ever, more women and more persons of color than ever, none of them seem to be deemed a phenom,” said Mary Anne Marsh, a Democratic political consultant.

“It’s a replay of Donald Trump vs. Hillary Clinton. Instead, it’s Beto O’Rourke in the Bernie Sanders role, to the detriment of every woman running. Not one woman got that kind of coverage. Not one. Not Kamala. Not Kirsten. Not Elizabeth Warren. Not Amy Klobuchar in a blizzard.”

“So what have we learned?” Marsh continued. “Nothing.”

In fairness, though, this isn’t necessarily sexist. Clinton was treated as the pre-ordained winner in both 2008 and 2016. Obama was clearly a star and essentially brand new on the scene but few thought he could possibly defeat her experience and the Clinton Machine; he was just an interesting new story contrasted to someone who had been in the national spotlight for sixteen years.

Harris is as close to an Obama parallel as it gets: she has been in the Senate for two years and is young and charismatic. But so many candidates—and so many women candidates—announced or hinted that they’re running at the same time that they may just be canceling themselves out. Gillibrand and Klobuchar have been on the national scene quite a bit longer—although they’re also both relatively young. But it’s not obvious that anyone was clamoring for them to run.

O’Rourke went viral because his impassioned response to a question about athletes kneeling during the national anthem went viral on YouTube and then he followed up by giving the hated Ted Cruz a real run for his money. He’s also got an interesting-for-a-politician past as something of a bad boy punk rocker. Still, it’s hard to take him seriously as a Presidential candidate.

While the 2018 midterm elections set the stage for women making historic gains in Congress — and last month marked another groundbreaking moment when five women officeholders joined the presidential race — no woman on the Democratic side received the kind of wall-to-wall coverage O’Rourke received.

And unlike O’Rourke, who rocketed to stardom last year as he raised a record-breaking $80 million in his unexpectedly close defeat to Republican Texas Sen. Ted Cruz, all of them had won their last election.

“I fully appreciate that he can espouse progressive values as a Democrat, that’s a benefit for the Democratic field. I don’t welcome being fed the retro candidacy,” said Tracy Sefl, a Democratic strategist and onetime Hillary Clinton adviser. “There’s a romanticizing of him. It’s the artful Vanity Fair cover — but in reality he was in Keokuk, Iowa in a coffee shop. The coffee shop had more reporters in it than Iowans. That’s the product of romanticizing.”

But here’s where it becomes persuasive:

Frustrations over the hyper-coverage of O’Rourke began to build on the eve of his campaign rollout, when Vanity Fair published its April edition online featuring photos taken by the renowned Annie Leibovitz. On the cover stood O’Rourke in blue jeans on a dusty Texas road with a headline declaring: “Beto’s Choice: I want to be in it. Man, I’m just born to be in it.”

His comments, which to some Democrats carried the scent of white male privilege, set fire to a whole different set of frustrations.

“A woman could never say ‘I was born to do this.’ But you know what? I think that some women were and it pains me that a woman couldn’t get away with saying that,” Sefl said.

Other female Democratic operatives questioned whether the women candidates could have gotten away with some of the comments O’Rourke made Thursday about his parenting style, or taken the kind of well-publicized, sans-family road trip he took earlier this year.

“I actually really like Beto, but all you have to do is put his quotes into the mouth of a hypothetical woman candidate: she ‘sometimes’ takes care of her kids, she was ‘born for this’, her speech was just ‘amazing, every word pulled out of me’ to know that women would not be the object of adoration,” said Jess McIntosh, a Democratic strategist and former senior communications staffer on the Hillary Clinton campaign.

None of this is or should be fatal to his campaign. He’s a newcomer to the national scene and still feeling his way. Still, these comments would certainly have landed differently were he a woman.

Now, it’s certainly possible for a woman to be the “it” candidate and get the star treatment O’Rourke has gotten.

Another losing candidate* from the 2018 cycle, Stacy Abrams, has gotten unusual treatment, indeed, including being chosen to deliver the Democratic response to the State of the Union and touting herself as a potential 2020 Presidential candidate.

More obviously, Alexandria Ocasio-Cortez has gotten very much the same sort of breathless coverage that O’Rourke has—including late night talk show appearances and magazine covers. That’s incredibly unusual for a freshman House member. Were she 34 rather than 29, she’d almost certainly be touted as a Presidential contender. Then again, she has at least generated actual policy ideas and shaped the debate. O’Rourke, by contrast, has sparked a minor cottage industry of stories wondering what it is he believes in.

*Granted, there were legitimate questions about the legitimacy of Abrams’ less that didn’t exist in O’Rourke’s case. Still, it’s unusual for losing an election to be a catapult to a campaign for even higher office.