The idea that the U.S. does not negotiate with terrorists is simply not historically accurate, so should we be reconsidering the policy of not negotiating with ISIS for the release of Western hostages? 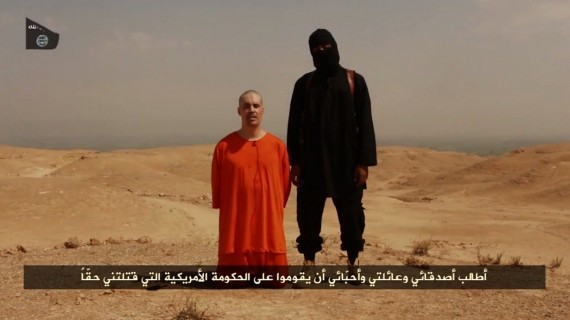 In the wake of the most recent beheading by ISIS of an American hostage, President Obama is ordering a review of the long-standing U.S. policy of not negotiating for the release of hostage and not paying ransoms:

The Obama administration confirmed on Tuesday that it was reviewing its policy on securing the release of United States citizens taken hostage abroad, but that the ban on paying ransom had not changed.

Word of the review, disclosed by an under secretary of defense in a letter to a Republican lawmaker, came as the administration was grappling with a series of beheadings of American captives by the Islamic State militant group, which posted a video Sunday announcing the third such killing.

Some family members of hostages have criticized what they see as an unacceptable refusal by the administration to grant concessions to hostage-takers, including ransom payments.

Unlike European governments, which have paid many millions of dollars in ransom to win the release of citizens held by the Islamic State or other militant groups, the United States has said it will never pay money to rescue its citizens. It has also privately pressed other governments not to pay.

Administration officials said on Tuesday that the policy review, first reported on Monday by The Daily Beast, was not a re-evaluation of the ransom prohibition.

“The United States government, as a matter of longstanding policy, does not grant concessions to hostage takers, for a very important reason — granting such concessions would put all American citizens overseas at greater risk for kidnapping,” Alistair Baskey, a spokesman for the National Security Council, wrote in an emailed statement. “Furthermore, paying ransoms would only sustain the very same terrorist organizations that we are working to destroy.”

Mr. Baskey said the administration’s goal “has always been to use every appropriate resource within the bounds of the law to assist families to bring their loved ones home.”

Josh Earnest, the White House spokesman, told reporters at a daily briefing that “the president continues to believe, as previous presidents have concluded, that it’s not the best interests of American citizens to pay ransom to any organization, let alone a terrorist organization, that’s holding an American hostage.”

Mr. Earnest did not specify precisely when the review had been undertaken or when it would conclude.

“This is something that the president ordered back in — over the summer,” he said. Because of “the extraordinary nature of some of the hostage-takings that we’d seen this year,” he continued, “the president felt it was warranted to direct the relevant departments and agencies who have traditionally been involved in assisting families as they try to recover the safe return of their family members” to review their policies.

Christine Wormuth, an under secretary of defense, disclosed the review in a letter to Representative Duncan Hunter, a California Republican who sits on the House Armed Services Committee. A copy of the letter posted on The Daily Beast website was stamped Nov. 11.

The letter was a response to an Aug. 20 letter from Mr. Hunter, seeking clarity on the administration’s position regarding American citizens held abroad.

“As a result of the increased frequency of hostage-taking of Americans overseas, and the recognition of the dynamic threat posed by specific terrorist groups,” Ms. Wormuth’s letter said, “the president recently directed a comprehensive review of the U.S. government policy on overseas terrorist-related hostage cases, with specific emphasis on examining family engagement, intelligence collection, and diplomatic engagement policies.”

This issue has come up before in connection with the videos that ISIS has released of the beheadings of American hostages. Back in the late summer when reporter James Foley was killed, his family told the news media that they had been threatened with prosecution after raising the possibility of paying the ransom that was being demanded for their son on their own outside of the auspices of the United States Government. To be fair, while it technically would have been a violation of U.S. law for the family to either attempt to ransom Foley or actually do so, most legal observers agreed at the time that it would have been very unlikely that the Justice Department would have pursued charges against them had they done so, At the time, though, there were questions raised about whether or not the United States and Great Britain, who have been the only western nations to date to see their nationals killed by ISIS rather than released, should reconsider their policy against paying ransom:

While Britain shares the United States’ refusal to pay ransom, other European nations do not. That has led to charges that ransom payments have helped fund al-Qaida and other terrorist organizations. In a video released this week by ISIS, a man who said he was captured British journalist John Cantlie touched on this distinction.

“They negotiated with the Islamic State and got their people home, while the British and the Americans were left behind,” he said in the video.

Fattal, now a doctoral student in history at New York University, argues that American citizens should not be made to suffer because of flawed U.S. policy in the Middle East.

“In the situation where the U.S. creates such a mess and citizens have to pay for it, or part of the small cost of it, I think the U.S. government should bail those citizens out in the same way that it bails out its banks,” says Fattal.

The issues here aren’t easy, of course. On the one hand, the fact that it’s only been the citizens of nations that have refused to pay ransom or negotiate with ISIS that have been murdered in this brutal fashion raises the issue of whether, and why, we are abandoning our citizens to a certain death. On the other hand, there is the fact that we cannot be sure that ISIS would act in good faith if we did try to negotiate, or that payment of any ransom would actually lead to the release of hostages, especially since there is quite frankly more value to ISIS in holding, and killing, Americans and Brits, than there is in holding citizens of France, Germany, The Netherlands, or any other Western nations, especially now that Britain and the U.S. are in the lead in the war against ISIS in Iraq and Syria. Additionally, of course, there’s the possibility that agreeing to pay ransom will do nothing more than create the incentive to take more hostages, thus putting Western journalists and aid workers in Iraq and Syria in more danger than they are already in at this point. Finally, of course, there is the supposedly long-standing American policy of not negotiating with terrorists. In reality, of course, this is a policy that has mostly been honored more in the breach than in practice. The United States negotiated with Iran during the 1979-1981 Hostage Crisis, for example, and the Reagan Administration negotiated both directly and in directly with the groups that were holding nearly a dozen Westerners hostage in Lebanon for the better part of a decade in the 1980s. Most recently, we negotiated with a terrorist group in Pakistan for the release of Sgt. Bowe Bergdahl from captivity. So, to say that we don’t negotiation with terrorists really does not comport with historical truth, and the fact that we’ve done so in the past but are refusing to do so now raises the question of why our government decided to let James Foley and the others die rather than trying to negotiate for their release. When a family member of one of these men asks that question, I’m not sure what answer we can given them that can satisfy them.

I’m not sure what the “right” answer here might be, because I can see both the humanitarian argument for negotiation and the logical argument for not negotiating as having merit, and it doesn’t appear that the new policy review is going to seriously address changing the “no ransom” policy. Perhaps it should, though, because it doesn’t seem like the ongoing policy is doing much to stop ISIS from taking Americans captive and killing them for propaganda purposes.