So, Which Party Actually Brought Up Impeachment First Anyway?

It wasn't the Democrats. 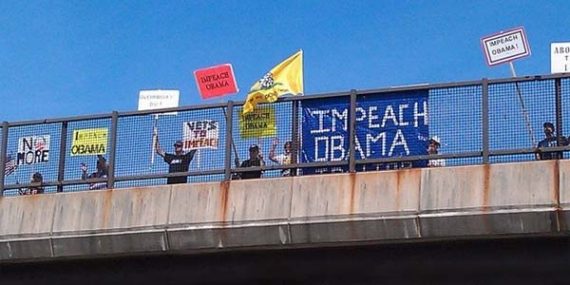 As I noted yesterday, Republicans have taken the position that the current ongoing talk of the impeachment of President Obama is nothing more than a Democratic fundraising ploy in advance of the midterm elections. While it is true, as FiveThirtyEight points out today, that Democrats are currently talking about the issue more than Republicans, a little bit of research reveals the following:

If impeachment is a scam, it was started on the right, early in the Obama presidency. Some of its early adherents believed in it; some thought they were merely responding to the passions of constituents; some, obviously, wanted to raise money. At the start of this summer, the conservative book-publishing industry churned out two new tomes about why Republicans needed to start an impeachment conversation, to stop pretending that it was crazy to accuse the president of high crimes and realize that it was consistent with the rest of the party’s arguments. Republicans mostly refused to listen.

Then, on July 8 of this year, came Sarah Palin. Her PAC (this is important—see above, re: fundraising) placed an op-ed at Breitbart.com, announcing that the time had come for the I-word. For inexplicable reasons, Palin can still shift a news cycle; in a lucky synchronicity, the Senate campaign of Iowa Democratic Rep. Bruce Braley chose July 8 to release a tape of his opponent calling for impeachment.

Nothing will stop a movement quite like the other party noticing it. “Should Obama be impeached?” had been denouncing the threat from the House floor. Meanwhile, helpful (and anonymous) aides were reminding people that Boehner had resisted—prophetically!—when the Republican Congress of 1998 put all of its chips on impeachment and the Clinton scandals. (Boehner later overcame that resistance and voted for all four articles of impeachment.)

One could dismiss many of the calls for impeachment that I list above as political rhetoric from Republicans who were pandering to the base of the party, although it isn’t hard to believe that people like Bachmann, Gohmert, Stockman, Broun, and Farenthold were actually serious when they brought up the topic. As I said yesterday, I think we can take the comments from people like Speaker Boehner and others who are dismissing the idea of impeachment as a serious idea at face value. They know it’s a politically dumb idea that would do far more harm to the Republican Party than it would to the President. But they also knew a year ago that going down the government shutdown route was a politically dumb idea that would harm the Republican Party and, yet, they still went down that route when they found that the base of their own party had backed them into a corner. What will they do if they’re faced with a similar situation when it comes to impeachment? Perhaps we’ll see some profiles in courage at that point, but past history suggests otherwise..

As far as the current debate over who started the impeachment meme, though, the answer to that question is fairly obvious, no matter how much Republicans may want to deny it.