Jon Huntsman put on a brave face last night, but he's really got nowhere to go from here. 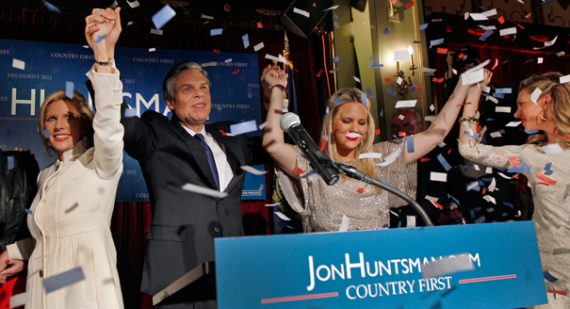 In his post-election speech last night, Jon Huntsman called his third-place finish in the Granite State a “ticket to ride,” and said he was taking the fight to South Carolina, where he is now polling at 2.3% of the vote according to the most recent RealClearPolitics average. In reality, though, it’s hard to see what kind of campaign Huntsman can mount at this point or even why he’s continuing:

MANCHESTER, N.H. — Jon Huntsman may have clawed his way to a third-place finish in New Hampshire, but he must overcome major challenges to remain competitive in the race for the Republican presidential nomination.

The former Utah governor is virtually unknown in South Carolina, which hosts the next presidential contest in just 10 days. Having essentially lived in New Hampshire since October, he has visited South Carolina just twice over the last two months. And with front-runner Mitt Romney already claiming wins in New Hampshire and Iowa, Huntsman has little time or money to improve his standing.

Still, he says a strong finish will create a “new order of the universe.”

But South Carolina isn’t quite as excited to greet Huntsman.

“If the election were held tomorrow, he would be a footnote,” said Rich Bolen, chairman of the Lexington County GOP, in an area that boasts the highest concentration of Republican voters in South Carolina.

The problem isn’t that Huntsman is perceived as being too moderate for the conservative voters in the South’s first primary. The problem is that voters don’t know who he is.

“People don’t know that he’s moderate,” said Bolen, who hasn’t endorsed anyone in the race. “They don’t know anything about him.”

Huntsman registered support from just 1 percent of likely South Carolina primary voters in a CNN poll conducted last week. And in Florida, which holds the subsequent contest on Jan. 31, Huntsman was at 2 percent in a Quinnipiac poll released this week.

He has four staffers on the ground in South Carolina, according to state director Joel Sawyer, a former state party executive director. And Huntsman has won endorsements from a handful of prominent local Republicans, including Alan Wilson, the state attorney general.

With ten days to go until the South Carolina primary and twenty to go until Florida votes, anything could be possible, but the odds that Huntsman could even come close to repeating in the Palmetto State what he did in New Hampshire are pretty slim. Moreover, it’s rather apparent that, despite what Huntsman says, third place in New Hampshire is not a ticket anywhere. Not only are there the organizational problems noted above, but it doesn’t really appear that the Huntsman campaign is at all prepared to compete beyond Florida should he somehow get there. He is already off the March 6th Virginia ballot, and in recent days he has failed to qualify for ballots in Illinois and Arizona. That’s simply not a credible campaign organization at this point, and the idea that he can just continue going forward for no apparent reasons seems silly and unwise.

One analyst suggests that Huntsman may need to start thinking about his future:

The real answer might be more ambitious: Huntsman, 51, might be thinking that he has a shot at winning the White House in four or eight years. South Carolina’s primary will be followed closely by the contest in Florida, where Huntsman has a chance to do well — in 2016 or 2020.

As Mitt Romney will tell you, running for president can take years. In 2008, Romney bowed out of the primary to back John McCain — not exactly his best friend — to be at his disposal while he built relationships with key leaders in early primary states. Huntsman, who was the governor of Utah for four years, can find himself in the same situation as Romney was, provided that he is diplomatic (shouldn’t be hard for a former ambassador) and exit the race as soon as Romney becomes the inevitable nominee.

“His name is going to come up next time, undoubtedly,” said Quin Monson, a political science professor at Brigham Young University. “I think the key for Huntsman is to go out with dignity, and that might mean competing a couple more times … to not say or do anything at this point that alienates the people that are left.”

Perhaps that’s what we’ll see. Huntsman will fight the brave fight in a primary or two and then bow out and rally behind the party’s inevitable nominee. He’s no Ron Paul, so I cannot see him keeping this up until the convention even if he did have the campaign cash to finance a run like that. Additionally, although there’s been speculation about him being courted by the American’s Elect people, I don’t see him putting together an ultimately quixotic third-party run in the fall.  Huntsman instead ought to look forward to 2016, or 2020, and perhaps the possibility of a position in a Republican Cabinet should Mitt Romney win in November.

For those of us who saw Huntsman as one of the few rational voices in a party that has been increasingly dominated by shrillness, animosity, and policy proposals that seem to have little connection to reality, it’s disappointing that he didn’t do better. Had Huntsman come in second last night, we might be having a very different conversation this morning, but that didn’t happen and there’s no real use in engaging in alternative history speculation at this point. I’ll say this much, though. For a candidate who caused many people to ask “Who?” when he first entered the race, he’s done far better than anyone expected at the beginning. Partly, no doubt, that’s due to the fact that he was able to get exposure through debate invitations, but one also cannot underestimate the value of retail politics in a state like New Hampshire, and Huntsman did very well at that old Granite State tradition.

It wasn’t good enough, though. Absent a miracle in South Carolina that isn’t going to happen, I would expect Huntsman to be out of the race before Florida.