Making it easier for people to vote doesn't necessarily mean that more people will vote. 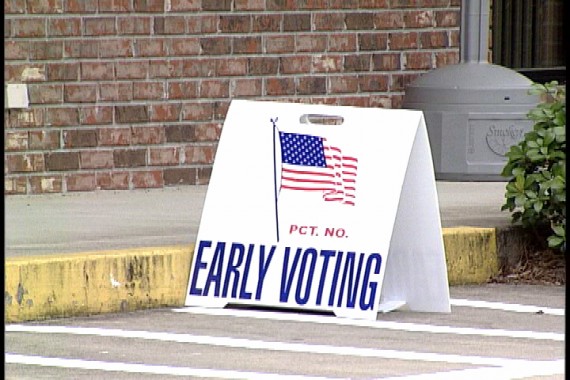 Reaching what seems like a counter-intuitive conclusion, a group of professors at the University of Wisconsin has concluded that allowing voters opportunities to vote before Election Day actually makes it less likely that people will vote:

ELECTION Day is nearly upon us, but for many voters it has already come and gone. States have aggressively expanded the use of early voting, allowing people to submit their ballots before Election Day in person, by mail and in voting centers set up in shopping malls and other public places. More than 30 percent of votes cast in the 2008 presidential race arrived before Election Day itself, double the amount in 2000. In 10 states, more than half of all votes were cast early, with some coming in more than a month before the election. Election Day as we know it is quickly becoming an endangered species.

Early voting offers convenience and additional opportunities to cast a ballot. Common sense tells us that this should mean higher turnout. But a thorough look at the data shows that the opposite is true: early voting depresses turnout by several percentage points

Our research, conducted with our colleagues David Canon and Donald Moynihan at the University of Wisconsin, is based on a three-part statistical analysis of the 2008 presidential election. First, we analyzed voting patterns in each of the nation’s 3,100 counties to estimate the effect of early voting laws on turnout. We controlled for a wide range of demographic, geographic and political variables, like whether a county was in a battleground state.

Controlling for all of the other factors thought to shape voter participation, our model showed that the availability of early voting reduced turnout in the typical county by three percentage points.

That certainly isn’t the argument that advocates of early voting made when they were asking for it to be adopted in states across the country. Making it more convenient for people to vote, they argued, would increase turnout because it would mean that people wouldn’t have to worry about fitting a trip to the polling place into what might be a busy work and family day, or having to stand in line for long periods when the polls first open or close (which is typically when most people vote due to their work schedules).

From a common sense point of view this would seem to be correct, so why the counter-intuitive result ?

The answer lies in the nature of voter registration laws, and the impact of early voting on mobilization efforts conducted by parties and other groups on Election Day.

In most states, registration and voting take place in two separate steps. A voter must first register, sometimes a month before the election, and then return another time to cast a ballot. Early voting by itself does not eliminate this two-step requirement. For voters who missed their registration deadline, the convenience of early voting is irrelevant.

Early voting also dilutes the intensity of Election Day. When a large share of votes is cast well in advance of the first Tuesday in November, campaigns begin to scale back their late efforts. The parties run fewer ads and shift workers to more competitive states. Get-out-the-vote efforts in particular become much less efficient when so many people have already voted.

When Election Day is merely the end of a long voting period, it lacks the sort of civic stimulation that used to be provided by local news media coverage and discussion around the water cooler. Fewer co-workers will be sporting “I voted” stickers on their lapels on Election Day. Studies have shown that these informal interactions have a strong effect on turnout, as they generate social pressure. With significant early voting, Election Day can become a kind of afterthought, simply the last day of a drawn-out slog.

Or, in other words, people who want to vote are going to find a way to do it whether the polls are open for two weeks or between 6:00am and 7:00pm on Election Day. Turning voting into the equivalent of a trip to the DMV or a trip the the ATM doesn’t necessarily to anything to convince people who aren’t motivated to participate in the political process to do so.

The authors of the study have a recommendation, but it’s one that is sure to cause controversy in some circles:

There is a way to improve turnout and keep the convenience of early voting. Our research shows that when early voting is combined with same-day registration — that is, you can register to vote and cast an early ballot on the same day — the depressive effect of early voting disappears. North Carolina and Vermont, two otherwise very different states that combined early voting with same-day registration, had turnout levels in 2008 that were much higher than the overall national figure of 58 percent of the voting-age population. Turnouts in Vermont and North Carolina were, respectively, 63 percent and 64 percent. Allowing Election-Day registration, in which voters can register at the polling place, has the same effect. Our models show that the simple presence of Election-Day registration in states like Minnesota and New Hampshire increases turnout by more than six points.

By removing barriers that require potential voters to register weeks before a campaign reaches its height, less-engaged citizens can enter the voting process late — and political campaigns can respond by maintaining the intensity of their efforts through Election Day.

The problem with same-day registration is that the opportunities for voter fraud seem readily apparent. By allowing people to register and vote on the same day, there are very few safeguards to prevent someone who is not legally entitled to vote in an election to do so before it’s determined that their registration is invalid for some reason.

Additionally, notwithstanding the experiences of Vermont and North Carolina, making it easier for “less-engaged citizens” to vote doesn’t necessarily mean that those people are going to go out and vote. Moreover, one wonders what the value actually is of people who aren’t engaged in the political process, aren’t aware of the issues, and may not even know who the candidates are casting a ballot. Everyone has a right to vote, but if you haven’t got the slightest idea what the issues in the election are then perhaps we’d all be better off if you just sat on the sidelines for this one.

The full study is available here.