They may both be Republicans, but the relationship between the President and the Senate Majority Leader is bad and seems to be getting worse. 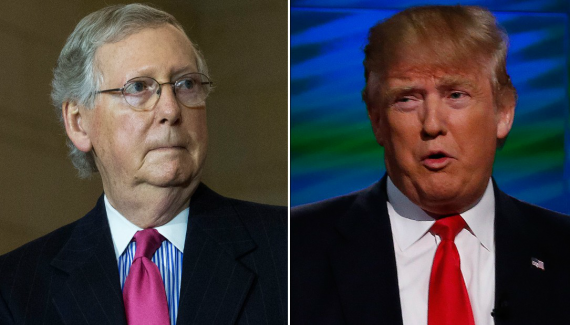 The New York Times is out with a report about the deteriorating relationship between the Republican President and the Republican Senate Majority Leader, which has reached a point where it seems likely to have an impact on Congress to get anything done in the current political climate:

The relationship between President Trump and Senator Mitch McConnell, the majority leader, has disintegrated to the point that they have not spoken to each other in weeks, and Mr. McConnell has privately expressed uncertainty that Mr. Trump will be able to salvage his administration after a series of summer crises.

What was once an uneasy governing alliance has curdled into a feud of mutual resentment and sometimes outright hostility, complicated by the position of Mr. McConnell’s wife, Elaine L. Chao, in Mr. Trump’s cabinet, according to more than a dozen people briefed on their imperiled partnership. Angry phone calls and private badmouthing have devolved into open conflict, with the president threatening to oppose Republican senators who cross him, and Mr. McConnell mobilizing to their defense.

The rupture between Mr. Trump and Mr. McConnell comes at a highly perilous moment for Republicans, who face a number of urgent deadlines when they return to Washington next month. Congress must approve new spending measures and raise the statutory limit on government borrowing within weeks of reconvening, and Republicans are hoping to push through an elaborate rewrite of the federal tax code. There is scant room for legislative error on any front.

A protracted government shutdown or a default on sovereign debt could be disastrous — for the economy and for the party that controls the White House and both chambers of Congress.

Yet Mr. Trump and Mr. McConnell are locked in a political cold war. Neither man would comment for this article. Don Stewart, a spokesman for Mr. McConnell, noted that the senator and the president had “shared goals,” and pointed to “tax reform, infrastructure, funding the government, not defaulting on the debt, passing the defense authorization bill.”

Still, the back-and-forth has been dramatic.

In a series of tweets this month, Mr. Trump criticized Mr. McConnell publicly, and berated him in a phone call that quickly devolved into a profane shouting match.

During the call, which Mr. Trump initiated on Aug. 9 from his New Jersey golf club, the president accused Mr. McConnell of bungling the health care issue. He was even more animated about what he intimated was the Senate leader’s refusal to protect him from investigations of Russian interference in the 2016 election, according to Republicans briefed on the conversation.

Mr. McConnell has fumed over Mr. Trump’s regular threats against fellow Republicans and criticism of Senate rules, and questioned Mr. Trump’s understanding of the presidency in a public speech. Mr. McConnell has made sharper comments in private, describing Mr. Trump as entirely unwilling to learn the basics of governing.

In offhand remarks, Mr. McConnell has expressed a sense of bewilderment about where Mr. Trump’s presidency may be headed, and has mused about whether Mr. Trump will be in a position to lead the Republican Party into next year’s elections and beyond, according to people who have spoken to him directly.

While maintaining a pose of public reserve, Mr. McConnell expressed horror to advisers last week after Mr. Trump’s comments equating white supremacists in Charlottesville, Va., with protesters who rallied against them. Mr. Trump’s most explosive remarks came at a news conference in Manhattan, where he stood beside Ms. Chao, the transportation secretary. (Ms. Chao, deflecting a question about the tensions between her husband and the president she serves, told reporters, “I stand by my man — both of them.”)

Mr. McConnell signaled to business leaders that he was deeply uncomfortable with Mr. Trump’s comments: Several who resigned advisory roles in the Trump administration contacted Mr. McConnell’s office after the fact, and were told that Mr. McConnell fully understood their choices, three people briefed on the conversations said.

“Great to see that Dr. Kelli Ward is running against Flake Jeff Flake, who is WEAK on borders, crime and a non-factor in Senate,” he tweeted last week. “He’s toxic!”

At a campaign rally in Phoenix on Tuesday, Mr. Trump alluded to Mr. Flake unfavorably, referring to him as “weak on borders” and “weak on crime” without mentioning him by name. He referred to Mr. McConnell only in passing, calling on him to abolish the Senate filibuster.

Senior Republican officials said before the rally that they would stand up for Mr. Flake against any attacks. A Republican “super PAC” aligned with Mr. McConnell released a web ad on Tuesday assailing Ms. Ward as a fringe-dwelling conspiracy theorist.

Former Senator Judd Gregg of New Hampshire, a Republican who is close to Mr. McConnell, said frustration with Mr. Trump was boiling over in the chamber. Mr. Gregg blamed the president for undermining congressional leaders, and said the House and Senate would have to govern on their own if Mr. Trump “can’t participate constructively.”

“Failure to do things like keeping the government open and passing a tax bill is the functional equivalent of playing Russian roulette with all the chambers loaded,” Mr. Gregg said.

Others in the party divide blame between Mr. Trump and Mr. McConnell. Al Hoffman, a former finance chairman of the Republican National Committee who has been supportive of Mr. McConnell, said Mr. McConnell was culpable because he has failed to deliver legislative victories. “Ultimately, it’s been Mitch’s responsibility, and I don’t think he’s done much,” Mr. Hoffman said.

But Mr. Hoffman predicted that Mr. McConnell would likely outlast the president.

“I think he’s going to blow up, self-implode,” Mr. Hoffman said of Mr. Trump. “I wouldn’t be surprised if McConnell pulls back his support of Trump and tries to go it alone.”

To be fair, it has been clear for some time that the relationship between the President and the Majority Leader wasn’t exactly warm and fuzzy.

While McConnell has joined fellow Republican leader on Capitol Hill in tacitly backing Trump and largely refraining from criticizing him directly, there has always been an uncurrent of disdain between the two men that leads one to believe that, in the end, McConnell would prefer it if Donald Trump weren’t the leader of the Republican Party at the moment. As with Paul Ryan and the House leadership, though, McConnell has largely kept quiet and gone along with the Administration because he sees it as the only way to get any of the elements of the Republican agenda passed over the next four years. Since January, though, there have been several reports about what McConnell has had to say in private to advisers and other Senators, and it has been largely dismissive of Trump and McConnell has repeatedly been reported as expressing exasperation at Trump’s tirades and the impact they have had on his ability to get anything done on Capitol Hill.  Trump, on the other hand, hasn’t been quite as private in his comments about the Senate Majority Leader. Last night during his speech in Phoenix, for example, Trump not only attacked both of Arizona’s Republican Senators but also repeated an argument he made in the past when he said that McConnell needed to end the legislative filibuster. For his part, McConnell has made it clear that he has no intention of doing this, and that there is not sufficient support among Senate Republicans to do what Trump demands.

The important question, of course, is what impact this obviously deteriorating relationship between the Senate Majority Leader and the President could have on the Republican agenda on Capitol Hill and the President’s ability to push any of the items on his agenda, to the extent he actually cares about getting his agenda through Congress. The most obvious example, of course, is the effort to ‘repeal and replace’ the Affordable Care Act, an effort which barely passed the House and died in the Senate thanks largely to the fact that the details of actually doing so were far more controversial, even among Republicans, than they were when the GOP was voting on such measures during the Obama Administration and could be assured that what they were passing would never actually become law. Beyond that, though, there are matters ranging from passing a new budget, something that Trump seemed to threaten last night when he said he was willing to risk a government shutdown to get his border wall funded, to tax reform, immigration reform, and infrastructure spending. As it is, each of these measures is going to be difficult to get through the Senate given the fact that it’s going to be difficult in the current political climate for McConnell to get Democratic support on cloture votes without some kind of legislative compromise. One has to wonder just how willing McConnell is going to be to stick his neck out for a President like this, especially if Trump continues to attack McConnell and openly campaign against sitting Senators in his own party.