Trump Caves To Democrats, Agrees To Deal To End Shutdown Without Wall Funding

In a deal that can only be described as a cave by the President, the government shutdown is on course to be ended by the end of the day today. 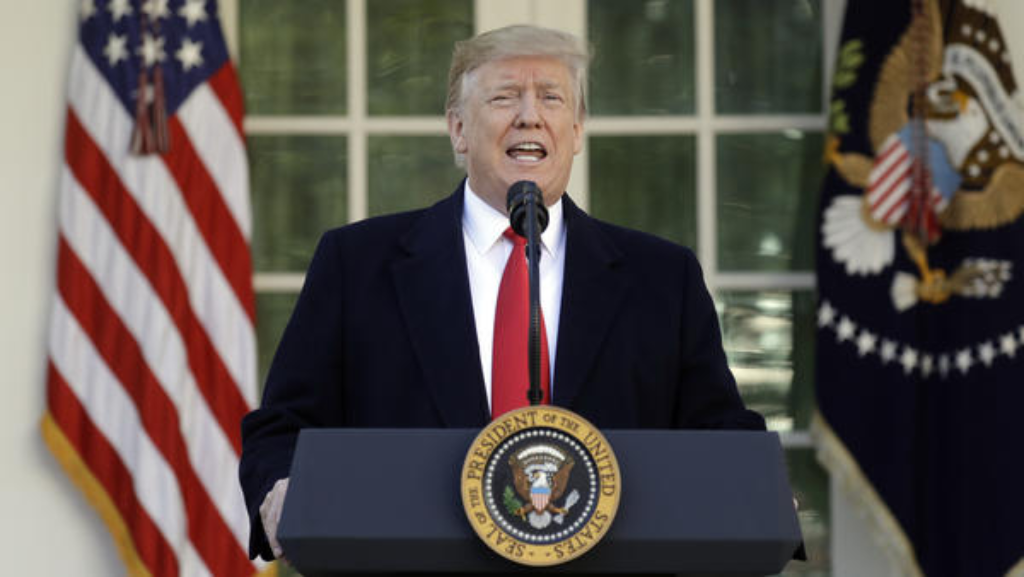 The White House, House of Representatives, and Senate have reached a deal to end the Federal Government shutdown:

WASHINGTON — President Trump agreed Friday to reopen the federal government for three weeks while negotiations proceeded over how to secure the nation’s southwestern border, backing down after a monthlong standoff failed to force Democrats to give him billions of dollars for his long-promised wall.

The decision paved the way for Congress to pass spending bills as soon as Friday that Mr. Trump will sign to restore normal operations at a series of federal agencies until Feb. 15 and begin paying again the 800,000 federal workers who have been furloughed or forced to work for free for 35 days.

The plan includes none of the money for the wall that he had demanded and was essentially the same approach that Mr. Trump rejected at the end of December, meaning he won nothing concrete during the impasse. But if Republicans and Democrats cannot reach agreement on wall money by the February deadline, he indicated that he was ready to renew the confrontation or declare a national emergency and bypass Congress altogether.

“We really have no choice but to build a powerful wall or steel barrier,” Mr. Trump said in the Rose Garden. “If we don’t get a fair deal from Congress, the government will either shut down on February 15, or I will use the powers afforded to me under the laws and Constitution of the United States to address this emergency.”

The cease-fire could pave the way for Mr. Trump to deliver his State of the Union address to Congress after all. He had originally been scheduled to make the speech next Tuesday, but Speaker Nancy Pelosi rescinded her invitation to come to the House chamber until the government was reopened. It was not immediately clear when the speech might proceed.

As he announced the move, Mr. Trump paid tribute to the federal workers who have endured five weeks without pay, expressing sympathy for them in a way he had not until now. “You are fantastic people,” he said. “You are incredible patriots. Many of you have suffered far greater than anyone but your families would know or understand.”

He promised to ensure that workers will be compensated for the paychecks they have missed since the shutdown began in late December. “I will make sure that all employees receive their back pay very quickly or as soon as possible,” he said. “It will happen fast.”

The surprise announcement was a remarkable retreat for a president who made the wall his nonnegotiable condition for reopening the government. Mr. Trump relented as the effects of the shutdown rippled across the Northeast, with impact far beyond paychecks, such as air traffic slowingFriday because of a shortage of air traffic controllers, who called in sick. The F.B.I. director said he was as angry as he had ever been over his agents not being paid, and 14,000 workers at the Internal Revenue Service did not show up for work despite orders to come in.

Mr. Trump offered no explanation for his surrender, nor did he even acknowledge that it was one. Cabinet officials and White House aides lined the sides of the Rose Garden and applauded him. The president began his remarks as if he had actually emerged victorious, saying that he was “very proud to announce” what he called “a deal to end the shutdown and reopen the federal government.”

With polls showing the president enduring most of the blame by the public, Republicans led by Senator Mitch McConnell of Kentucky, the majority leader, pressured Mr. Trump to agree to the temporary cease-fire. Over the next three weeks, a House-Senate conference committee representing both parties will negotiate a border security plan, but if it fails to reach a consensus, government agencies could close again.

President Donald Trump on Friday announced a deal to temporarily reopen the federal government, ending the longest shutdown in U.S. history without securing any money for his proposed border wall along the U.S.-Mexico border.

The agreement, which funds the government until Feb. 15 so negotiators can try to work out a larger immigration and border security compromise, marks a major reversal for the president. Trump has insisted for weeks that he wouldn’t reopen the government until lawmakers agreed to fork over more than $5 billion for the border wall.

Trump’s Rose Garden announcement comes as the effects of the shutdown, which stretched into its 35th day on Friday, have started to dramatically ramp up. As the shutdown’s fifth week came to a close, the East Coast was riven with airline delays and federal workers missed their second paycheck.

It’s unclear whether divided lawmakers will be able to reach an agreement in the coming weeks that can satisfy the president’s demands for a wall. In his Friday speech, Trump threatened to declare a national emergency if the negotiations fail.

“As everyone knows, I have a very powerful alternative, but I didn’t want to use it at this time,” Trump said. “Hopefully it will be unnecessary.”

The president said that he plans to make sure the 800,000 federal workers who have gone without a paycheck for more than a month will receive back pay “very quickly or as soon as possible,” likely within four or five days, according to one senior administration official.

Congress is expected to green-light the president’s proposal quickly. The Senate is taking steps to approve it on a voice vote. The House is also hoping to clear the bill by unanimous consent in hopes of sending the proposal to Trump by Friday evening. House Democratic aides were reaching out to their members shortly after Trump’s speech to make sure no one objects to moving the bill quickly and without a roll call vote.

The agreement was the product of negotiations between the Senate’s top leaders, McConnell and Schumer, who met on Thursday following the failure of two long-shot measures to reopen the government. During the meeting, McConnell and Schumer discussed several options to temporarily reopen the government: One was a pro-rated “down payment” on the wall, another was larger funding bill for other departments beyond DHS, aides said. Both were deemed unrealistic.

Schumer insisted that Democrats wouldn’t support wall funding. Schumer then countered with a proposal to first reopen the government, then move to negotiations on border security. McConnell said he’d take that proposal to the White House. The two Senate leaders kept in touch on the phone throughout the day on Friday.

Trump’s decision to back a measure to temporarily open the government while negotiations continue comes one day after the White House urged Republicans to reject a nearly identical proposal put forward by Senate Democrats. Some in the White House, including the president’s son-in-law and senior adviser Jared Kushner, had been hoping to strike a wide-ranging immigration compromise as part of the talks to reopen the government, a prospect that few on Capitol Hill believed was realistic.

With this agreement, the process should move fairly quickly. The Senate will likely take up the bill first, which will essentially amount to passing the Democratic bill that was rejected yesterday with the addition of a provision extending funding only to February 15th and another that will lead to the establishment of a House-Senate Conference Committee that will deal with the border security aspects of the funding bill for the Department of Homeland Security appropriations bill. This committee will be tasked with coming up with border security proposals that both sides can agree upon. These bills will advance to the House of Representatives today, which will apparently use accelerated voting procedures permitted under House rules to get the matter voted on today. From there, it will go to the President where he’s expected to sign the bill later today.

Theoretically at least, we could end up back in a shutdown situation again after February 15th, but that seems unlikely. This shutdown has been an utter disaster for the Administration and, by extension, for Republicans. One of the main reasons for that has been the repeated reports regarding the impact that the shutdown has had on Federal workers and contractors, on the businesses that cater to them, and more broadly on the economy. While it’s not clear what exactly spurred this deal forward, the fact that we began to hear this morning about delays and ground stops at major airports on the East Coast likely helped to drive the point home that things were only going to get worse as time went on. Because of all this, it’s highly unlikely that either side will be all that eager to risk another shutdown.

There’s really no other way to characterize this other than to say that the President has caved and that the President has lost this battle with the Democratic House and Senate Democrats. With the exception of the fact that the Continuing Resolution that will be through February 15th instead of February 8th, this is basically the same deal that unanimously passed the Senate before the shutdown began in December. Namely, a deal that will reopen the government, pay Federal workers who haven’t been paid since December 28th, and does not include a single cent of funding for the President’s border wall. In the time between now and then, the House and Senate will work on a funding bill that would fund the government through the end of the Fiscal Year as well as a separate “border security” package that may or may not include funding for a border wall. All in all, this was a massive political loss for the President and a victory for Nancy Pelosi and the House Democrats. Not too bad for their first month in office.