For the second time in a week, reports indicate that the President intervened to get a family member a security clearance. 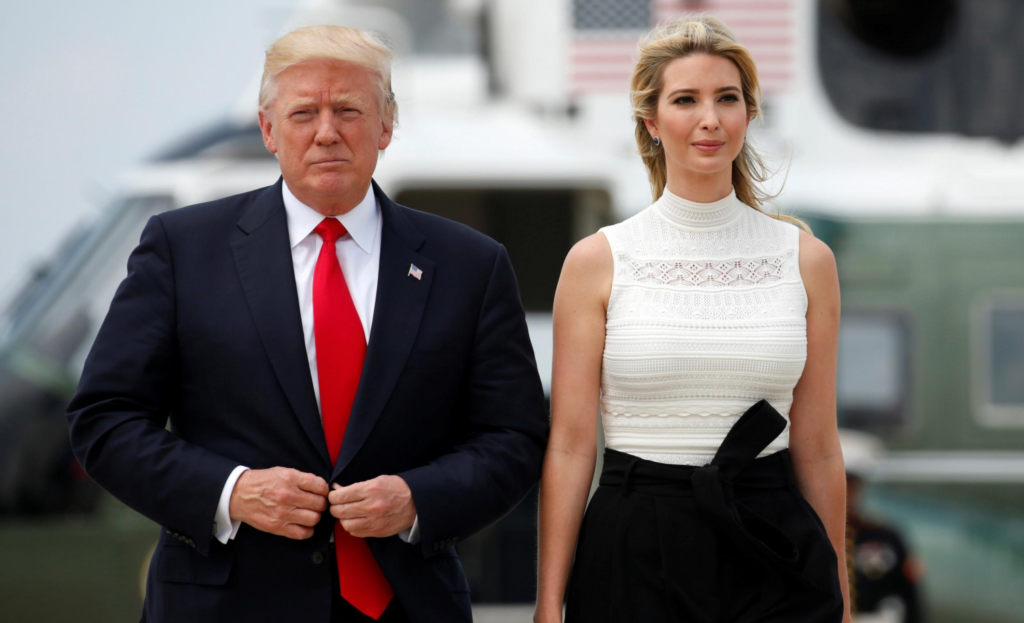 Late yesterday, CNN reported that the President personally intervened to get a security clearance for his daughter Ivanka even as officials in the White House raised questions about whether it should be granted at all:

The President’s crusade to grant clearances to his daughter and her husband, Jared Kushner, rankled West Wing officials.

While Trump has the legal authority to grant clearances, most instances are left up to the White House personnel security office, which determines whether a staffer should be granted one after the FBI has conducted a background check. But after concerns were raised by the personnel office,

Trump pushed Kelly and McGahn to make the decision on his daughter and son-in-law’s clearances so it did not appear as if he was tainting the process to favor his family, sources told CNN. After both refused, Trump granted them their security clearances.

The development comes on the heels of Thursday’s New York Times report that President Trump ordered Kelly to grant Kushner a top secret security clearance despite concerns raised by intelligence officials. The President has denied he had any role in Kushner receiving a clearance.

The latest revelation also contradicts Ivanka Trump’s denial to ABC News three weeks ago, when she said her father had “no involvement” regarding her or Kushner’s clearances.

Several sources told CNN it is feasible that she was unaware of the red flags raised during her background check process, as well as the President’s involvement in it. According to a source familiar with her process, she “did not seek, nor have, outside counsel involved in her process as no issues were ever raised.” A separate person added that she was notified by career officials that her clearance had been granted.

Kushner’s clearance was downgraded in February 2018 after Kelly stipulated new changes to the security clearance system because a senior West Wing staffer with a temporary clearance was accused of domestic abuse by his ex-wife. Aides who previously operated on “top secret/sensitive compartmentalized information” interim clearances saw their access changed to “secret,” a classification for less sensitive material. In the months after Kushner’s clearance was downgraded, Trump badgered aides about the hold up with his daughter and son-in-law, remarking that he didn’t see what the issue was in granting them clearances because they would likely move back to New York in the coming months. Sources tell CNN that, for now, neither of them are expected to leave the West Wing.

“We cannot respond to every anonymous source,” she added.

Because they are a married couple, concerns that surfaced during one person’s security clearance investigation could stall or block both of them from receiving a full clearance. But officials had concerns about granting Trump a clearance that were separate from those raised about her husband, according to one of the sources, though it’s unclear what the concerns regarding her were. At the time, the couple told associates they believed Kelly was blocking them from getting clearances because he did not feel like they belonged in the West Wing.

The President pushed harder for his son-in-law to get a clearance because of his wide-ranging portfolio, which includes a Middle East peace proposal, and because of heightened scrutiny on Kushner’s inability to secure a clearance, sources said. His daughter’s portfolio did not require a high level security clearance, though as a senior adviser who sits in meetings with other senior officials, she is privy to sensitive information.

It’s unclear exactly what it was that was holding up the approval of Ivanka’s security clearance. In her husband’s case, it’s been known from the beginning that the business his family did overseas, especially in the Middle East in nations such as the U.A.E. and other Persian Gulf states was deemed problematic. Additionally, it has been reported that Kushner was forced to revise his security clearance application multiple times due to the fact that he had, allegedly inadvertently, omitted certain information regarding his past business dealings with foreign entities. Ivanka, however, has not been involved in the Kushner family real estate business as far as we know so it seems unlikely that the problems with her application were due to her husband. Instead, it’s likely that the problems arose from her own contacts with foreign entities in the context of her work for The Trump Organization and her work for her now-defunct fashion business, which included contacts with government and business interests in China and elsewhere that resulted in her being granted copyrights by Chinese authorities on what seemed to be an expedited basis, especially after her father became a candidate for President.

As I said in commenting on the report that Trump had intervened to get Jared Kushner a security clearance, the ordinary procedure in the security clearance process inside the White House is quite different from how the Trump Administration appears to be acting. Under that procedure, the decision regarding whether or not to grant a clearance to a White House employee is made by the White House security office, which is charged with reviewing the application that the employee submits and the results of the ensuing background check by the Federal Bureau of Investigation. In the event of a dispute regarding whether or not a particular employee should be granted a clearance, then the White House Counsel’s Office is brought into the process as is the White House Chief of Staff. Generally speaking, if it is still decided after this review that a particular employee should not get a clearance then the application is denied. Looming over all of this, though, is the President of the United States, who has the authority to classify or declassify information as he sees fit and who can order that an employee be granted a security clearance even if there are questionable items in their record that suggests it should not be granted. As with the Kushner clearance, that seems to be what happened with Ivanka’s security clearance.

As with the Kushner security clearance, these reports directly contradict previous statements from the President and his daughter regarding the process by which Ms. Trump and her husband obtained their security clearances. In a late January interview with The New York Times, the President denied that he was involved in the process at all or that he had ordered John Kelly or other officials to give either Kushner or his daughter a clearance. Specifically, the President said he had little knowledge about what was going on with the matter and that he left the decisions about those matters to General Kelly and other White House officials. Ivanka Trump, meanwhile, told ABC News in February that her father was not involved in the decision to grant either her husband or her a security clearance. It’s possible, of course, that Ms. Trump was unaware of what was going on behind the scenes regarding the clearance process, but that seems unlikely. Based on these reports, which have been verified by multiple sources, that was clearly a lie and that Trump was, in fact, the deciding factor in whether or not to grant a clearance to both of them.

As I’ve said before, there’s no question that it is within the President’s discretion to override the decision of those under him and grant a security clearance if he believes it to be appropriate. However, in this case, it was deemed to be unusual enough by former Chief of Staff John Kelly that he felt obligated to draft a contemporaneous internal memorandum detailing how he had been ordered by the President to grant these security clearances. The other thing that makes this unusual, of course, is that this was a security clearance granted to the President’s daughter and son-in-law and that Trump gave the order after Kushner and Ivanka went over the heads of the White House Counsel and the Chief of Staff to make a direct appeal to the President himself. Once that happened, it was obvious what Trump would do, which is one of the chief problems with family members working in the White House, to begin with. As both of President Trump’s former Chiefs of Staff have found, it is impossible to create a wall between top staffers and the President, which is a traditional role of the Chief of Staff, when those staffers are the President’s daughter and son-in-law.