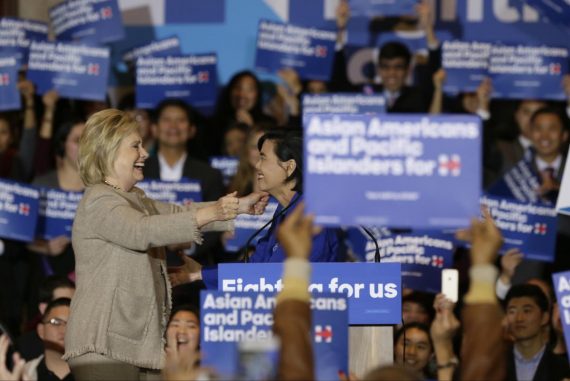 Latino Americans aren’t the only voting bloc that appears to be tilting leftward thanks to the emergence of Donald Trump, The New York Times reports that polling appears to show the still small but rapidly growing Asian-American community moving into the Democratic camp in response to Trump’s rhetoric:

LAS VEGAS — On paper at least, Asian-Americans seem like perfect Republicans. Many are small-business owners. Their communities tend to be more culturally conservative. And a lot of them, having fled oppressive Communist governments, found comfort in the Republican Party’s aggressive anti-Communist policies.

But in what could be a significant realignment of political allegiance, Asian-Americans are identifying as Democrats at a quicker pace than any other racial group. And many Republicans worry this election will only accelerate that trend, damaging their party for years to come with what is now the fastest-growing minority in the country.

The Republican presidential nominee, Donald J. Trump, is not helping. His attacks on the Chinese — which he has sometimes delivered in a crude, mocking accent — are a feature of his populist campaign. He has suggested cutting off immigration from the Philippines, citing fears that the longtime American ally poses the same national security threat as countries like Syria and Afghanistan.

Mr. Trump’s talk of deporting millions of undocumented immigrants has also stirred up painful memories among a group that has been singled out under American law before, whether by the Chinese Exclusion Act, which barred the immigration of Chinese laborers until 1943, or by the internment of Japanese-Americans during World War II.

“It’s like we’re going back in time,” said Marc Matsuo of Las Vegas, who grew up in Hawaii with parents of Japanese ancestry and recalled how his family used to feel uncomfortable expressing their heritage, to the point they would not speak Japanese. He now helps register Asian-Americans to vote. “I was always brought up that you don’t talk about religion, you don’t talk about politics. Not anymore.”

Though Asian-Americans are still just 4 percent of the overall eligible voting population, their political power is concentrated in important swing states like Nevada and Virginia, where both parties have been building on their efforts to reach out.

In and around Las Vegas, home to one of the country’s largest Asian populations, this means printing campaign leaflets in Korean, having a Vietnamese translator on standby at speeches, publishing op-ed articles in the local Filipino newspaper and hiring employees who know enough Mandarin to recruit voters at the Chinatown seafood market.

Republicans’ difficulties with Asian-Americans are similar to those the party has faced with most minority groups. A sense that the party is hostile to immigrants and minorities has driven more Asian-American voters into the Democratic Party lately, political scientists and community leaders said. And if Republicans do not make more of an effort, those voting shifts could harden, just as Hispanics’ voting patterns have.

“What we see now are some early indications that people who either leaned toward the Democratic Party or did not identify with either party are now starting to identify as Democrats,” said Karthick Ramakrishnan, a professor of political science at the University of California, Riverside. “This is still a group that is making up its mind,” he added, “but it should be concerning to the Republican Party that you’re starting to see this crystallization.”

A national survey in the spring by Asian and Pacific Islander American Vote, a nonpartisan research group, showed “a significant leftward shift” since 2012 among Asian-American registered voters, with 47 percent now identifying with the Democratic Party, compared with 35 percent in 2012. Fifteen percent identified as Republican.

A Pew Research Center report released last month showed that Asian-Americans have since 2008 embraced the Democratic Party at a faster rate than any other ethnic group.

Still, many Republicans believe that the damage is reversible and see Asian-Americans’ political identity as still very young and malleable. For example, among many Asian-Americans, there is a tendency to be less forgiving on illegal immigration, which is sometimes seen — unfairly or not — as an issue specific to Latinos.

With the exception of some areas where they have long been a large part of the population such as Hawaii and California, Asian-Americans have largely been a forgotten factor in American elections largely due to the fact that, for the most part, they represented a relatively small percentage of the voting age population to the point where even measuring their impact on elections was difficult due to the fact that sample sizes would be so small. That is increasingly no longer the case, though. Asian-Americans have replaced Latino Americans as the nation’s fastest growing minority group, in no small part because immigration from Asia has exploded in recent years while immigration from Latin America, and most especially Mexico, has slowed over the same period of time. While it will be some time before Asian-Americans even come close to having the influence of the Latino and African-American segments of the population, that influence will continue to grow over time, especially since statistics seem to indicate that Asian-American immigrants are more likely to seek permanent residence and, eventually, citizenship than Latino immigrants, many of whom come to the United States for what is often temporary employment. Additionally, the number of areas where Asian-Americans are becoming a force in politics has expanded beyond California to include areas such as Northern Virginia, which is home to vibrant and growing Vietnamese and Korean populations thanks in no small part to the fact that many people fleeing the wars in those countries in the past have settled. Because of this, a political party that ignores this growing segment of American politics does so at its peril.

The growing importance of Asian-Americans in politics is yet another reason why the presence of Donald Trump at the top of the ticket is such a potentially big problem for the Republican Party. His anti-immigrant rhetoric resonates quite strongly among voters whose immigrant experience is of quite recent vintage, for example, and, as noted, his calls for things like a ban on Muslim immigration bear a disturbing resemblance to the 19th Century laws that barred immigration from China for what were obviously racially biased reasons. Add into this the fact that polls in the past have shown that Asian-Americans are more likely to favor a more activist government, and the GOP’s problem is laid bare. Just as they’ve lost touch with African-Americans due to the desire to obtain political power by pursuing the white southern vote and with Latino-Americans by virtue of the party’s stand on immigration issues, they’re now in danger of losing the battle for the nation’s fastest growing minority group. If this trifecta comes to pass then the party will eventually end up paying the price at the ballot box. Perhaps then party leaders will understand the need for change, but by then it may be too late.