The White House's immigration plan is facing opposition in both chambers of Congress from moderate and conservative Republicans alike. 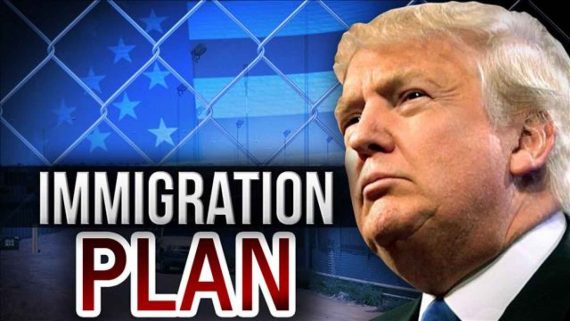 The White House’s proposal to extend protection to the beneficiaries of the Deferred Action For Childhood Arrivals (DACA) program and others is running into opposition from members of his own party:

The barebones framework released late last week, which Trump is expected to promote during his State of the Union address Tuesday night, would fundamentally reshape the nation’s immigration system by no longer allowing U.S. citizens to sponsor parents, adult children and siblings for green cards — amounting to the biggest proposed reduction in legal immigration in decades, experts say.

That idea, at least in concept, isn’t sitting well with many Republicans.

Sen. Lindsey Graham (R-S.C.) said while the overall plan from Trump was “credible,” he would not support such significant cuts to the legal immigration side.

On the administration’s proposal to restrict legal immigration, Sen. Mike Rounds (R-S.D.) said: “We can agree to disagree to begin with, but we still get to write it.”

Yet clamping down on family-based migration is a consistent and fundamental pillar of Trump’s immigration demands, and it’s unclear how much he is willing to compromise on cutting off so-called “chain migration” in his quest for a Dreamer deal. The mixed reaction to Trump’s plan only underscores the divisions within the GOP and the difficulties in reaching a bipartisan agreement on immigration.

Trump’s allies in Congress, including GOP Sens. David Perdue of Georgia and Tom Cotton of Arkansas, have stressed restrictions on family-based migration are a priority. For conservative hard-liners in the House, the administration’s plan is actually too generous in offering a path to citizenship for undocumented immigrants. Still other Republicans say tackling such legal immigration cuts is far too complicated a challenge to solve when 690,000 young immigrants without legal status are in danger of losing temporary deportation protections under an Obama-era directive.

The Trump administration has long spoken favorably of shifting the nation’s immigration system to one largely based on merit. And some Republicans say they’re fine with restricting migration based on the luck of family ties as long as those green cards get rerouted to immigrants with highly coveted skills.

As things stand, there’s plenty about the Administration’s immigration plan for those who generally favor more liberal immigration laws to object to:

One estimate released Monday by the libertarian Cato Institute, which supports more open immigration laws, found that the levels of legal immigration could plunge about 44 percent under the White House proposal. That, according to the think tank, could be the “largest policy-driven legal immigration cut since the 1920s.”

A bipartisan plan devised by six senators tried to sate Trump’s demands on “chain migration” by barring parents of Dreamers from being sponsored by their soon-to-be-legalized children. It also delays green card holders from being able to sponsor their adult children until they obtain citizenship. But the administration and its congressional allies immediately said that wasn’t enough.

Senate Majority Whip John Cornyn of Texas, a key bellwether for Senate Republicans on immigration, said he was fine with new family-based restrictions as long as the administration processed the number of green card applications that were already pending.

That amounts to a years-long backlog, and the administration has proposed doing so. But that, in turn, is drawing fire from immigration hawks because that amounts to at least 3.9 million foreigners waiting for visas, according to State Department figures, and even more applicants who are backlogged at U.S. Citizenship and Immigration Services.

In Alaska, GOP Sen. Lisa Murkowski says she regularly hears from the sizeable Filipino community about the immigration system and how it can take nearly two decades for them to sponsor relatives. They regularly urge her for more equity in the legal immigration system, she said.

“I need to look really carefully at it because in my state, it’s the issue of legal immigration that is as compelling as anything,” Murkowski said of Trump’s framework. “So I’d like to try to figure out a way that we can work fairly with the legal immigration system.”

Combined with deep resistance from Democrats on upending the nation’s family-based immigration system, it appears unlikely Trump’s proposal can survive Capitol Hill intact. A smattering of senators who have been regularly meeting in Sen. Susan Collins’ (R-Maine) office haven’t even gone into such specifics on legal immigration, senators say. Instead, they’ve focused on building support for a barebones base bill that could serve as a starting point for the expansive floor debate that Senate Majority Leader Mitch McConnell (R-Ky.) has promised.

In addition to Republican Senators, Trump’s immigration plan is also facing skepticism in the House of Representatives:

House Republicans voiced skepticism and outright opposition Tuesday to President Trump’s immigration plan, a warning sign of the tough path ahead for any deal regarding the nation’s young undocumented immigrants.

The concerns came from a range of lawmakers, not just immigration hard-liners, as they emerged from a closed-door GOP meeting where the issue was discussed.

The White House framework released last week would offer a 10- to 12-year path to citizenship to well over 1 million “dreamers” who have been in the country illegally since they were children, in exchange for $25 billion for a U.S.-Mexico border wall and other changes.

“The president’s suggestion is going to be difficult for a lot of us,” said Rep. Phil Roe (R-Tenn.). “I think all of us want the DACA problem solved. But it may be a bridge too far.”

Roe said that he is open to allowing legal status for the dreamers, but that he does not support granting them citizenship, which he argued would put them ahead of others trying to enter the United States legally.

Others had similar concerns. Rep. James B. Renacci (R-Ohio) said: “The devil’s always in the details. . . . I have some stipulations in there, just not automatic citizenship.”

Rep. Mark Meadows (R-N.C.), head of the conservative Freedom Caucus, said that Trump’s plan would take major adjustments and that afterward, “there might be some support.”

Many House Republicans instead support a hard-line bill by Rep. Bob Goodlatte (Va.) that would grant current DACA recipients a three-year renewable legal status but no chance of citizenship. Earlier this month, trying to stave off a government shutdown, House GOP leaders agreed to demands from the Freedom Caucus to seek support for the measure and potentially put it on the floor for a vote.

But the Goodlatte measure appears likely to fail on the House floor because of opposition from Democrats and moderate Republicans, and it has no path forward in the Senate.

Rep. Steve King (R-Iowa), the leading immigration hard-liner in the House, said the president’s plan amounts to “amnesty” for dreamers. King said the dreamers should return to their native countries “and rebuild their home countries. I mean, it would be many times greater than any force of the Peace Corps we’ve ever sent out around the world.”

All of this, of course, is further evidence of the difficult path that a potential DACA deal faces in both the House and the Senate. In the Senate, the deal that a bipartisan group of Republicans and Democrats appear to be aiming for includes protections for DACA beneficiaries in exchange for funding for Trump’s border wall and other border security measures. This is similar to the deal that Senate Minority Leader Chuck Schumer thought he had reached with Trump just before the government shutdown earlier this month only to see the White House pull back from the deal at the last minute. Schumer subsequently withdrew the offer to Trump, but it seems clear that the general idea is one that would still gain bipartisan support in the Senate if it were put on the floor.

The problem, of course, is that such a proposal would likely not fare well in the House of Representatives, where more conservative Republicans are either supporting the President’s plan or supporting the far more restrictive plan put forward by Judiciary Committee Chairman Congressman Bob Goodlatte.  As noted, the differences between the two plans are significant. Goodlatte’s plan would cover far fewer people than the White House’s plan would and would bar those people from ever becoming citizens, leaving them forever locked in as what would essentially amount to Permanent Resident Alien status notwithstanding the fact that people with such status are generally able to apply for citizenship after five years. Trump’s plan on the other hand would extend DACA-like protections not only to those currently covered by the program but also to a larger group of people that could amount to as many as two million individuals. Those individuals would be able to apply for citizenship after a period of between ten and twelve years. The Trump plan would also have coverage to fund the border wall and other security measures. While this might be something that moderate Republicans could support, the plan adds a poison pill in the form of a proposal to change the very nature of the U.S. immigration system. This proposal is essentially identical to the one that was put forward last August by Senators Tom Cotton and David Perdue and endorsed by the President.. That plan would basically eliminate the family-based immigration system that has been in place for the at least the past fifty years and replace it with what the Senators claim is a “skills based” immigration system that would favor immigrants with skills who could contribute to the economy. In reality, it’s estimated that the plan the White House has put forward would reduce legal immigration to the United States by as much as 50% and bar as many as 22,000,000 immigrants or potential immigrants over the next five decades. That’s a measure that would not pass the Senate, and would likely be rejected by many moderate Republicans in the House.

What this means, of course, is that all three proposals that are either on the table or potentially on the table seem to have no chance of becoming law unless someone finds a way to compromise the proposals. In many respects,  though, the proposals are irreconcilable. For many conservatives in the House, the idea that these DACA beneficiaries or others who might benefit from the law might eventually be eligible to apply for citizenship is a non-starter. They would rather see these people, and other people in the country illegally, live forever as second class citizens who would be unable to take advantage of a benefit that every other Permanent Resident is eligible for. Additionally, it’s clear that neither the White House plan nor the Goodlatte plan would stand any chance of passing in the Senate, and what’s apparently being put together in the Senate would have no chance in the House. Where that leaves us is entirely unclear, but its not good news for DACA beneficiaries and those of us who support extending the program before it expires.