Two men were killed last night before they could carry out what appears to be a planned attack on an anti-Islam event in Texas. 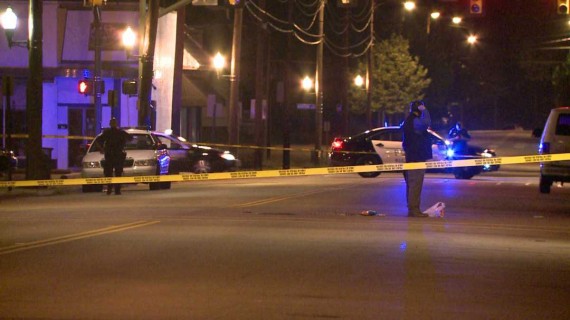 An event being held late yesterday in Garland, Texas featuring cartoons of the Prophet Mohammed, among other things, was the site of an apparent attempted attack by two gunmen who were shot dead before being able to enter the building:

Two gunmen were killed after they opened fire Sunday evening outside an event hosted by an anti-Islam group in Garland, Tex., featuring cartoons of the Prophet Muhammad, local officials said. According to the authorities, the two assailants shot a security guard and were, in turn, shot and killed by police officers.

Officials did not name the gunmen or assign a motive for the attack. A spokeswoman for the F.B.I. in Dallas said the agency was providing investigative and bomb technician assistance to the Garland police.

The City of Garland confirmed the episode in a Facebook posting.

The shooting began shortly before 7 p.m. outside the Curtis Culwell Center at an event organized by the American Freedom Defense Initiative, an anti-Islam organization based in New York.

As today’s Muhammad Art Exhibit event at the Curtis Culwell Center was coming to an end,” the Facebook posting said, “two males drove up to the front of the building in a car. Both males were armed and began shooting at a Garland I.S.D. security officer.”

The Garland Independent School District said in a statement that its security officer, Bruce Joiner, was shot in the ankle and taken to a hospital. He was later released.

The police, fearing that the gunmen’s car might contain an explosive device, dispatched a bomb squad and evacuated the center and nearby businesses, including a Walmart.

The event included a contest for the best caricature of the Prophet Muhammad, with a $10,000 top prize.

Drawings of the prophet are considered offensive in most interpretations of Islam. In January, gunmen in Paris attacked the offices of Charlie Hebdo, a French satirical newspaper known for printing caricatures of the Prophet Muhammad, killing 12 people.

A live video stream of the Garland event on the organizer’s website recorded the moment when the crowd was interrupted by a private security guard in military fatigues, who bounded onto the stage to announce that there had been a shooting outside. “Were the suspects Muslim?” a man shouted.

“I have no idea right now,” said the man in fatigues.

Geert Wilders, an anti-Islam leader in the Netherlands for the Party for Freedom, attended the event and delivered a speech. After the attack, he wrote “never surrender to terrorism!” in a Twitter post, and he posted a picture of himself with what he said were SWAT forces taken before the gunmen opened fire.

Pamela Geller, an outspoken anti-Islam activist and an organizer of the event, said the group decided to hold the event in the Curtis Culwell Center because members had heard that a Muslim group had a conference in the same room after the attack on the Charlie Hebdo office.\

Ms. Geller described Sunday’s event as pro-free speech, and said that Muslims had become a “special class” that Americans were no longer allowed to offend.

The attack itself does seem to have been preplanned given the fact that there were apparently postings on Twitter accounts that have previously made comments supportive of ISIS in anticipation of the attacks, although it doesn’t appear that anyone noticed the message before the attack or in enough time to provide the police in Garland with any warning. The tweets, one of which was shared by CNN’s Carol Costello, refer to the attackers as “mujahadeen” and make other comments generally supportive of the attack. Although the police have not formally named any suspects, other reports indicate that the attackers were Elton Simpson of Phoenix, Arizona and his roommate. This morning, police were executing search warrants at the apartment the two men shared, and other reports have indicated that Simpson had previously come to the attention of law enforcement in connection with a terrorism investigation, and was convicted on some sort of terror-related charge in 2011, although it does not appear that he was under surveillance of any kind in the time leading up to last night’s attack. Simpson is also, allegedly, the person behind at least one of the Twitter accounts that sent out messages regarding the attack before it happened, leading to the conclusion that he likely sent the messages shortly before committing the attack itself.

While the investigation is still in its early hours, the obvious implication is that Simpson and his unnamed partner targeted this event in Garland in retaliation for some perceived insult to Muslims in much the same way that the French satirical magazine Charlie Hebdo was targeted by terrorists earlier this year, an attack which resulted in multiple death and a standoff across France that was in the news for the better part of a week. Some reports this morning quoted law enforcement officials a saying that there had be increased “chatter” from some Islamist sources regarding the event, which is apparently one of the reasons why there was an increased police presence along with the private security that the organization running the event had provided for. As is usually the case with these one-off events, it doesn’t appear that there is any international connection between Simpson and groups such as ISIS or al Qaeda. Instead, as we saw with the Times Square Bomber, the Tsarnaev brothers, and the man who attacked the Canadian Parliament Building last year, it appears that we are dealing with another “lone wolf” scenario in which someone is essentially self-radicalized via the Internet and then plans some small-scale action on their own. In this case, the attackers were fortunately unable to even get inside the building, where they might have been able to cause some real damage.

Pamela Geller, who runs the organization that held the event last night, and Geert Wilders are, of course, not strangers to people who have been following anti-Muslim rhetoric since the September 11th attacks. Through her blog and the organizations that she has been affiliated with, Gellar has promoted a message that is quite often offensive even to non-Muslims and has, as a result, become somewhat popular on the right over the years. She is perhaps best known as one of the leaders behind the movement to stop construction of the Islamic Community Center in lower Manhattan that came to be called, incorrectly, the “Ground Zero Mosque” because of its proximity to the sight of the September 11th attacks. She has also been behind the placement of anti-Muslim ads in mass transit venues in cities such as New York, Washington, and elsewhere. Wilders, on the other hand, is known as the leader of a right-wing party in The Netherlands and member of the Dutch House of Representatives who has a long history of making anti-Muslim statements both in his political campaigns and elsewhere. Much like Geller, Wilders is someone that many people consider to be offensive and disreputable.

Because of this, some in the media have made comments that should be disturbing to anyone who supports the idea of free expression of ideas. For example, New York Times foreign correspondent Rukmini Callimachi had this to say:

Free speech aside, why would anyone do something as provocative as hosting a “Muhammad drawing contest”?

I understand and respect free speech. But to organize hate speech events, purely because you’re legally allowed to, is disgusting.

I understand on some level where Callimachi and Hill are coming from. As I’ve said before, I find Geller and Wilders, and others of their ilk, to be utterly offensive and the idea of holding an event that is specifically designed to offend people says as more about the organizers than it does about the people they are trying to offend. That being said, phrases such as “Free speech aside,” and Hill’s statement that he understands and respects free speech “but…..” are bothersome. It should not matter that someone exercising their rights under the First Amendment is doing so for the specific purpose of offending someone, their rights are as important and as worthy of being protected as the speech of someone standing on a soapbox preaching flowery rhetoric about peace and understanding. Additionally, it’s hard for me to understand how someone says that they “understand and respect” free speech and then go on to make statements that appear to concede that there might be some excuse for a violent response to supposedly “offensive speech.” Whatever one might think of Geller, Wilders, and people who apparently enjoy spending their Sunday evening looking at Mohammed cartoons, there is as little justification for Simpson’s actions last night as there was for the murders of the staff of Charlie Hebdo. The fact that speech like this is provocative and even offensive is, in the end, irrelevant. Speech of all kinds is often intended to be provocative and offensive, and the fact that it is should not be grounds for someone like Callimachi and Hillwho makes their living in an industry that exists because of the First Amendment, to question its legitimacy. Finally, of course, regardless of the content of the speech, there is no justification for violence of the kind the Elton Simpson had planned in Garland. Fortunately, he was stopped by police before he could carry out whatever it is that he had planned.

There Is No Distinction Between “Freedom Of Speech” And “Hate Speech”