The U.S. and its allies are calling on Bashar Assad to step down, but there's little we can do when he says no. 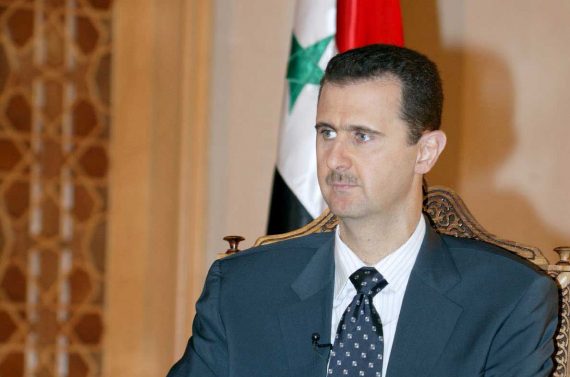 In a written statement that was followed up by a public statement by Secretary of State Clinton, President Obama has called on Syrian leader Bashar Assad to step down and imposed a series of new sanctions on the Syrian regime in response to the months-long crackdown by Damascus on anti-government protesters:

President Obama on Thursday called for Syrian President Bashar al-Assad to step down, a demand aimed to ratchet up the diplomatic pressure on the leader who has launched a bloody crackdown on his own people for months.

“For the sake of the Syrian people, the time has come for President Assad to step aside,” Obama said in a statement.

The president has signed an executive order to block property and prohibit certain transactions with respect to Syria, the White House announced.

The order immediately freezes all the Syrian government’s assets under U.S. jurisdiction and bans Americans from “engaging in any transaction involving the government of Syria.”

Obama also says he expects his actions “to be amplified by others.”

Speaking to reporters Thursday morning Secretary of State Hillary Clinton reiterated the White House statements. “The people of Syria deserve a government that respects their dignity … their rights and lives up to their aspirations. Assad is standing in their way,” Clinton said. “For the sake of the Syrian people the time has come for him to step aside and leave this transition to the Syrians themselves.”

Even though the Obama administration has condemned the scale and brutality of Assad’s crackdown on the Syrian people, even going so far to say that Assad has “lost legitimacy,”  it had stopped short of calling for him to step down.

The statements by Obama and Clinton were accompanied by a joint written statement from French President Nicholas Sarkozy, German Chancellor Merkel, and British Prime Minister Cameron echoing the President’s call for Assad to step down. It also coincides a report from a United Nations human rights groups saying that Syria had committed human rights violations against its citizens during the  crackdown on rebellious cities. For himself, Bashar Assad is telling the United Nations that military actions inside Syria had come to an end:

BEIRUT: Syria’s President, Bashar al-Assad, has told the leader of the United Nations, Ban Ki-moon, that military operations against protest towns have ”stopped,” as 25 more people were reported dead by the Arab Organisation for Human Rights.

Mr Ban spoke to Mr Assad by phone yesterday before a UN Security Council meeting on Syria where the UN human rights chief was expected to call for the international war crimes court to investigate Mr Assad’s deadly crackdown, which has killed more than 2000 people.

Mr Ban ”emphasised that all military operations and mass arrests must cease immediately. President Assad said that the military and police operations had stopped”, the UN statement said.

There was no immediate sign from the ground of an end to hostilities between the government and opposition.

Security forces killed at least 10 people and made sweeping arrests again on Wednesday as the phone talks went ahead, activists said.

The UN said Mr Assad ”enumerated the reforms he will undertake in the next few months” including constitutional change and elections.

The spokesman said Mr Ban emphasised these must go ahead ”without further military intervention”.

Ed Morrissey criticizes the President for taking so long to speak out for Assad’s departure as compared to the relatively short amount of time that it took for the White House to call for Hosni Mubarak to step down as protests raged in Egypt in January and February. For that matter, one could unfavorably compare the way the U.S. and the rest of  the world has reacted to the violence in Syria with the way it reacted to similar events in Libya in March.We acted in those case, why, one might ask, has it taken so long to take any significant action with regard to Syria?

The criticisms are well taken, but it’s worth noting that Syria is not Egypt, and it’s not even Libya. In Egypt, the United States and the West had influence with both the government and the military that we could use to attempt to encourage Mubarak to listen to the demands of his people, and to ensure that the nation didn’t collapse into chaos after he left power. In Libya, we had an armed rebellion backed by defecting elements of Ghadaffi’s military that created a rag-tag, albeit effective, rebel fighting force. Neither of those things exist in Syria. We have diplomatic relations, but no real influence, with the Damascus government, and the anti-government protesters are more akin to the civilian protests in Egypt than the armed rebellion in Libya. Because of this, our ability to influence the situation in Syria with anything but words strikes me as being very limited.

On the military side, as I’ve discussed before, there’s simply no realistic possibility that the United States, or any other Western nation, is going to intervene in Syria in the manner that we have in Libya, nor should we. Unlike Libya, Syria has a strong and apparently unified army, and better weapons. They’ve also got friends, not only in Iran, but also in Lebanon and among various terrorist groups. Military action against Syria poses a significant risk of turning into a regional war that nobody wants, or can afford. Even the Israelis don’t seem all that eager to bring about regime change in Syria, which makes sense considering that what comes next could be even worse than what they’re dealing with now. Domestically, the negative reaction that the President has faced to his unilateral action in Libya strikes me as making it less likely that he’d try the same move in Syria when the stakes are so much higher, and the election is so much closer.

This leads me to wonder what the value is of calling on Assad to step down when we know that he’s going to do it, and we’re not going to do whatever it takes to make it happen. The sanctions will hurt the Syrian economy, but that’s more likely to impact the average Syrian than it is the Syrian leadership. At this point, unless some Syrian General decides that Bashar Assad has outlived his usefulness and puts a bullet between his eyes, it strikes me as unlikely that he’ll be leaving Damascus anytime soon. I sure hope the Syrian people don’t think that today’s message from the White House means that we’re going to save them, because giving them that kind of false hope just strikes me as cruel.