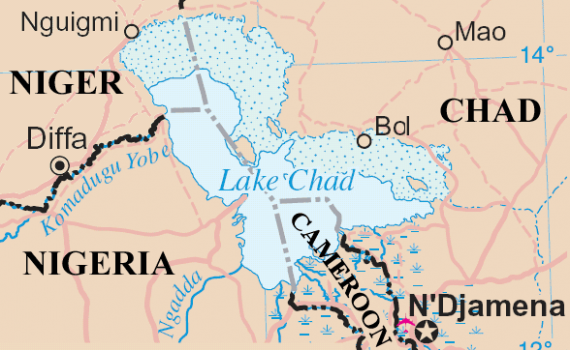 Late yesterday, we learned that a contingent of about 80 marines is headed to Chad to aid in the ongoing search for more than 230 Nigerian schoolgirls who were kidnapped by Boko Haram nearly six weeks ago:

WASHINGTON — The United States has sent 80 troops to Chad in Central Africa to support a growing international effort in neighboring Nigeria to help find and rescue the schoolgirls who were abducted by an Islamist extremist group last month, the White House said on Wednesday.

The American military personnel are not ground troops. They are mostly Air Force crew members, maintenance specialists and security officers for unarmed Predator surveillance drones that will help search for the more than 260 Nigerian girls seized by the group, Boko Haram.

“These personnel will support the operation of intelligence, surveillance and reconnaissance aircraft for missions over northern Nigeria and the surrounding area,” the White House said in a statement formally notifying Congress about the deployment.

For the past 10 days, the United States military has been flying manned and unmanned surveillance aircraft over heavily forested regions in northeastern Nigeria, where intelligence officials believe the captors are hiding the girls.

But the aircraft have had to fly hundreds of miles from Italy or elsewhere in Africa to reach the search area, limiting the time they can loiter over the region. By contrast, the Predators that will join these aircraft will operate from a large air base in N’Djamena, the Chadian capital, near the search area across the border. France, the former colonial power in Chad, has long stationed fighter jets and other aircraft at the base.

“The force will remain in Chad until its support in resolving the kidnapping situation is no longer required,” the White House statement said.

The deployment to Chad augments a team of about 30 specialists from the State Department, the F.B.I. and the Pentagon who have been sent to Nigeria to advise officials there. About half are military personnel with medical, intelligence, counterterrorism and communications skills.

On Monday, the Pentagon announced an agreement that would allow the United States to share some intelligence, including aerial imagery, with Nigerian officials, but not raw intelligence data. American officials are wary of sharing too much because they believe that Boko Haram has infiltrated the Nigerian security services.cas

Donating American intelligence and surveillance assets to the search for these girls strikes me as a fine thing to do, keeping in mind the caveats I’ve noted about getting involved in the conflict in Nigeria. There are few other nations in the world that can fly the kind of surveillance flights that we can over such a vast area, and if our drones end up finding clues that lead to the rescue of the girls then they will have done their job. Moving the assets to Chad also makes sense for the reasons noted above, and especially considering that we don’t have any other forward deployment areas in the area.

Unfortunately, it’s unclear that the increased surveillance flights will be any more successful in finding the girls than previous efforts:

So far, there are few if any clues about the girls’ whereabouts. “Our sense at this point is that they’ve been dispersed into multiple smaller groups,” Amanda Dory, the Pentagon’s top Africa policy official, said during a hearing of the House Foreign Affairs Committee on Wednesday. “They may or may not all be in Nigeria.”

Another senior official, Sarah Sewall, the under secretary of state for civilian security, democracy and human rights, sidestepped a question from one lawmaker asking for an update on the girls’ location and welfare. “Given time, I am hopeful that we will make progress,” Ms. Sewall said.

At the hearing, the two American officials committed the administration to any effort to recover the girls safely. But they also made little attempt to mask their assessment that the Nigerian government, and specifically its military, must overcome entrenched corruption and incompetence to free the girls.

As I’ve noted before, the area where the girls are believed to be held consists largely of vast stretches of jungle that are controlled by Boko Haram and other militia groups. Finding even such a large group of children in an area like that isn’t going to be easy. Additionally, there have been some reports that officials believe that the terrorists may have split the girls up into smaller groups and placed them in disparate areas, including locations outside Nigeria. If that’ s the case, then locating all of them is going to be doubly difficult. Here’s hoping they’re located quickly.