The naming of Argentine Cardinal Jorge Mario Bergoglio as Pope has raised issues about his actions (or, in fact, inactions) during Argentina’s military regime from 1976-1983.  I have no special insight into Bergoglio’s actions (although some on that below), but I can comment on the military regime in question.  Indeed, I was going to write about this situation at some point, but I came across the following Tweet from Erick Erickson (via LGM) last night and it spurred me to comment:

That lefties are accusing the new pope of handing over lefties to the right wing junta for execution makes me adore the new pope.

This is a pretty heinous statement, in my opinion, given that the “right wing junta” in question would torture and summarily execute “lefties” handed over to them.  This represents partisan nonsense at its worst:  Erickson thinks of himself as part of the “right” so the “right junta” must be the good guys in this scenario.*  Or, at a minimum, he thinks that if “lefties” are making accusations, then the Argentine military regime should not be taken as a serious topic.

Erickson did not back off when he was criticized (shockingly enough) as he later wrote at Red State:

He’s already being attacked by lefties for allegedly handing over commies to the right wing junta back in the day. If you think this attack on him makes him more awesome, I’ve learned today that it means you are endorsing death squads as opposed to a new pope getting attacked by old enemies.

But here’s the thing:  glibness about the Argentine military regime that was in power from 1976 to 1983 is to be glib about death squads.  As such, if Erickson wants to dismiss these charges against the Pope  as simply political attacks, he is free to do so, but to glide over the significance of the Argentine military’s government at the time is highly problematic.  Regardless of one’s conclusions about Bergoglio’s actions, one has to take seriously the period of time in question, as well as the actions of persons in powerful positions at the time.

Prior to the establishment of democracy in 1983, Argentine politics had been a tumultuous affair pretty much from independence from Spain.  There were periods of stability (such as the first Peron era),  as well as dabblings in democracy.  However, the entire period was one punctuated, as was true of many of its neighbors, with military forays into governance, with the last military government being the most vicious.

The war against “subversion” was one waged against the Argentine people, and not just against guerrillas, but against anyone that the military thought might be sympathetic to the left, including students, professors, poets, philosophers, union leaders, and the like (yes, even priests).  The military used torture, rape, and disappearances** to terrorize its perceived enemies, leading to a substantial death toll.  As Stepehn G. Rabe notes:

During la guerra sucia (“the dirty war”) of the late 1970s, the Argentine military and associated death squads massacred 30,000 Argentines. Many of the dead assumed the title of “disappeared” or desaparecido. The victims, sometimes alive, were often dumped into the frigid South Atlantic from airplanes.

There is also the fact that the children of the disappeared were often given to military officers who were involved in the murder of the parents.  See, for example, this story from the NYT:  Daughter of ‘Dirty War,’ Raised by Man Who Killed Her Parents:

It took an incessant search by a human rights group, a DNA match and almost a decade of overcoming denial for Ms. Montenegro, 35, to realize that Colonel Tetzlaff was, in fact, not her father — nor the hero he portrayed himself to be.

Instead, he was the man responsible for murdering her real parents and illegally taking her as his own child, she said.

Jorge Rafael Videla, who led the military during Argentina’s dictatorship, stands accused of leading the effort to take babies from mothers in clandestine detention centers and give them to military or security officials, or even to third parties, on the condition that the new parents hide the true identities. Mr. Videla is one of 11 officials on trial for 35 acts of illegal appropriation of minors.

The trial is also revealing the complicity of civilians, including judges and officials of the Roman Catholic Church.

The abduction of an estimated 500 babies was one of the most traumatic chapters of the military dictatorship that ruled Argentina from 1976 to 1983. The frantic effort by mothers and grandmothers to locate their missing children has never let up. It was the one issue that civilian presidents elected after 1983 did not excuse the military for, even as amnesty was granted for other “dirty war” crimes.

Let me say this is as clear a terms as possible:  the actions of the Argentine military, as well as any number of military regimes in Latin American from the 1950s into the 1980s in the name of anti-communism were crime against human rights, liberty, and democracy.  They should not be the subject of glib political commentary (not if one wants to pretend that one has a clue as to what one is talking about).

As to placing the new Pope into this context, as noted in the excerpt above, charges of complicity of Catholic officials in these events creates questions regarding the new Pope if anything because he was head of Argentine Jesuits at the time.   A run down of the issues can be found in this WaPo piece:  Pope Francis faces scrutiny over Argentina’s ‘Dirty War’.

As the young leader of the country’s Jesuit order, Bergoglio was aware of the atrocities that were being carried out and worked quietly to save victims, according to people who knew him then. But Bergoglio, like many other clerics at the time, remained publicly silent about the abuse and did not openly confront the military leaders.

Exactly what Bergoglio did — and didn’t do — during the years of the dictatorship is now the focus of intense scrutiny since his ascendancy to Pope Francis, with the Vatican pushing back forcefully against allegations that Bergoglio failed to protect two left-leaning priests in his Jesuit order, Orlando Yorio and Francisco Jalics, who were kidnapped by soldiers in 1976 and imprisoned for five months.

Bergoglio did not speak publicly about his role during the dictatorship until 2010, when he told an interviewer that he hid and protected several persecution victims at the Jesuit seminary, but could not say how many. He also recounted helping a young man who shared his likeness to escape across the Brazil border, giving the man his identification card and dressing him up in clerical vestments as a ruse. “It saved his life,” Bergoglio said.

Part of the controversy regarding Bergoglio can be found here (as well as the two sides of the story):

At one point, Bergoglio said he met privately with military commanders, including coup leader Emilio Massera to inquire about the missing Jesuits. “Look Massera: I want them to appear,” Bergoglio said he told him in a tense encounter before abruptly walking out of the room.

Yorio and Jalics were eventually freed, dumped off in a field after five months, half-naked and drugged.

Yorio later blamed Bergoglio for the imprisonment. In a 1999 interview with a respected Argentine journalist, he was quoted as saying, “I have no reason to believe [Bergoglio] did anything to free us, in fact just the opposite,” suggesting his superior had lifted his protection on the men as a punishment for their political views.

The criticism of Bergoglio for not doing enough has prompted several prominent Argentine rights activists, including Nobel Peace Prize winner Adolfo Perez Esquivel, to come to his defense in recent days.

“There were some priests and bishops that helped the dictatorship, and others who spoke out and died because of it. But Bergoglio wasn’t a collaborator,” said Graciela Fernandez Meijide, a politician and prominent human rights investigator whose 16-year-old son vanished after being snatched from his bed by soldiers in the middle of the night.

There is also this general fact that provides some context:

Argentina’s church leaders did not confront the country’s military rulers with anything approaching the public fervor of fellow clerics facing other dictatorships, as in Chile or El Salvador, where Oscar Romero, the archbishop of San Salvador, was assassinated in 1980.

The bottom line is this:  Erickson is showing a severe lack of understanding of history to make the glib comments that he has.  More importantly, however, the tale of Argentina (and most of Latin America during the timeframe under discussion) is rife with horrific tales of military governments abusing its citizens all in the name of anti-communism (and theoretically, “liberty”).  There was far too much glib support for such policies in the US at the time, but the continued ignorance of the situation is really inexcusable.

One thing we ought to be able to do, especially now that the Cold War is well in our rearview mirrors, is acknowledge that everything done in the name of “anti-communism” should not be absolved.  Rather, the fact of the matter remains that many things done in the name of fighting “lefties” ended up being heinous abuses of human rights and were every bit as opposed to liberty, freedom, and democracy as any Cold Warrior’s worst case scenario of communism.

To summarize:  if one wants to understand the discussion about  Bergoglio and the military regime, one needs to know a bit of history.

Posted at both OTB and PoliBlog

*Erickson is a child of the talk radio generation who thinks that bombast equals cleverness and who has never seen a political discussion that can’t be delineated into a simplistic left-right dichotomy.  He is emblematic of what is wrong with conservative commentary in the current era.

**People would likely disappear without a trace—kidnapped by the government and tortured and killed without due process. 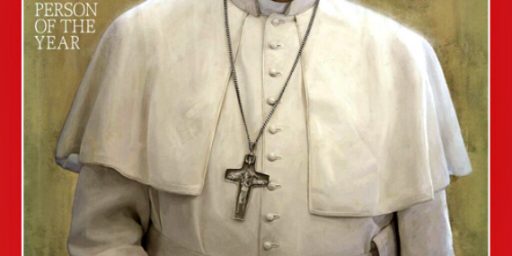