Some thoughts on a column by Roger Noriega on the Obama administration and Latin America, 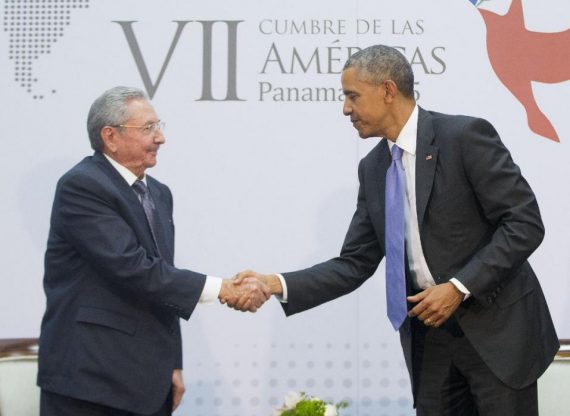 Roger Noriega served in the George W. Bush State Department and is one of Jeb Bush’s advisors on Latin America.  He wrote a column on President Obama’s approach to Latin America to correspond to the recent Summit of the Americas:  Can Obama Rescue His Failing Latin America Policy?  It starts thusly:

U.S. President Barack Obama has clearly noticed that many in Latin America and the Caribbean have an uncanny affinity for the myth of the Cuban revolution. What he has yet to realize, however, is that the vast majority of the region’s citizens would rather live in the Chile built by Augusto Pinochet than in the Cuba destroyed by Fidel Castro.

This is a typical false dichotomy that seems, in my experience anyway, to be popular with US conservatives, as if the choice across the region is two development models, both founded in authoritarianism:  Cuba or Chile.  Cuba is supposed to represent all the failures of the left while Pinochet’s Chile (and Noriega is the one that name checked Pinochet, I would note). For the most part this is a crude attempt to criticize Castro whilst eliding the brutality of the Pinochet regime.   Look, there is little doubt that Chile is wealthier than Cuba (but, again, that was true if we compare historically:  whether in 1959, 1973, or 1989—pick your year).  Indeed, the notion that everything one needs to know about Cuban and Chilean development is somehow vested in a contest between Fidel Castro and Augusto Pinochet is both simple-minded and simply wrong.

And look, like it or not, there is a romance associated with the Cuban Revolution in the minds of some Latin Americans but it isn’t as if the region is rife with attempts to emulate it.  Cuba is Cuba and it is well past time for Washington to get over it and stop treating like some outsized threat to US interests.  It is a small, poor island and it present no serious threat to US interests.

As Obama travels to Panama this week for his third Summit of the Americas, he encounters a region that has lost stability and prosperity since the president first attended the summit in 2009.

I am not sure that the region is in an especially different place now than it was in 2009 save, of course, for the clear negative effects of the Great Recession (that, one might note, started before 2009).  It is true that Venezuela, in particular, is more unstable in the present period (but that is not due to US policy one way or another) and that there is a burgeoning crisis in Central America we may recall the exodus of children from the region due to drug violence) is likewise part of a long-term set of conditions.   And, of course, the US does has some blame in that area, but not for reasons linked specifically to contemporary politics (save for the continuation of the drug war).

Noriega does a brief tour of the region:

Venezuela is only the most vivid example of a region in turmoil. Brazil’s economy slipped into recession last summer, and President Dilma Rousseff’s approval ratings have tanked just months into her second four-year term. Rising unemployment and anxiety, and an escalating political kickback scandal engulfing the ruling Workers’ Party, brought more than 1 million Brazilians to the streets last month calling for Rousseff’s impeachment and challenging her ability to govern.

Mexican President Enrique Pena Nieto is struggling to salvage economic reforms as he cuts spending to compensate for falling oil revenues and grapples with a crisis of confidence spawned by relentless drug corruption and violence.

Colombia’s president is rushing to conclude an implausible peace agreement with an armed guerrilla organization that plays a central role in the cocaine trade. The Fuerzas Armadas Revolucionarias de Colombia sow corruption and violence from the Andes on through to Central America, the Caribbean, Mexico, and every major city in the United States.

Central American governments, whose promising economies were integrated into a free trade agreement with the United States just nine years ago, now are struggling to stem the tide of migrants fleeing poverty and drug-fueled violence.

It is unclear to me how the issues in Brazil are the result of US policy (or how a Jeb Bush administration, for example, would create different results).    In regards to Mexico, would Noriega like the US to attempt to artificially increase the price of oil? (and is he proposing that the US stop fighting the war on drugs?).

In regards to Colombia, the notion that the peace talks with the FARC are a bad thing strikes me as wrong-headed (how a negotiated settlement to a conflict that has been going on since the the 1960s is a bad thing, especially since the evidence is pretty clear that a purely military solution is not going to work, is beyond me).  Of course, beyond that, how is the Obama administration is responsible for an action that is most decidedly one that has been generated internally in Colombia? The peace process was, for example, the major policy issue in last year’s presidential election (and is has not been engineered by the US).

In regards to Central America:  CAFTA-DR (the Central American Free Trade Agreement) has not gone away, nor has it been blunted in some capacity.  As such, it seems that Noriega is blaming Obama for the lack of performance of the policy because, well, because (and, again, did I mention the Great Recession?).  Beyond that is it worth noting that during the Obama administration the US-Colombia FTA and the US-Panama FTA were approved (both negotiated by the Bush administration but implemented by the Obama administration) meaning that there was not a lot of policy deviation in these areas.

And in regards to “drug-fueled violence” this is not anything new (sadly).  Further, it is driven by US demand for the drugs in question and the US war on drugs (again, areas of continuity from the past to the present, and likely into the future).

Like many U.S. liberals, President Obama sees Latin America and the Caribbean as a bundle of grievances against an imperious superpower. Rather than offering straight talk on Venezuela’s lawlessness and corruption, Obama pretends not to notice the country’s descent into chaos. Rather than engage Brazil and Mexico on transparency and private-sector growth, he leaves them to fend for themselves. Rather than help Central Americans maximize the benefits of free trade, he watches them retreat to cronyism and dysfunction. Rather than defend the rights of Cubans, he caves to Castro.

It’s not too late for Obama to recognize that his serious counterparts in the Americas don’t need a pal, they need a partner. They need investment and trade, capital and technology. They need solidarity in the defense of the rule of law, democracy, and human rights.  They don’t want anabrazo, they want a handshake.

In regards to the first of these paragraphs, I can’t help but think of the Green Lantern theory of international politics:  with enough will an American President can create amazing outcomes.  How is “straight talk” on Venezuela going to influence outcomes in that country?  Indeed, what, exactly, does that even mean?—further it isn’t as if the Obama administration hasn’t been critical of Maduro.  What are the magic words that Noriega wants to have deployed that will solve the woes of Mexico and Brazil?  This is nonsense.

In regards to the conclusion:  a)  investment, trade, etc. continues, and b) a handshake and not a hug?  What does that even mean?

At the end of the day it would be nice if advisors/those who seek to be policy-makers would be able to suggest more than wishful thinking and platitudes.