What Do Donald Trump And Sarah Palin Have In Common? 60% Of Americans Would Never Vote For Them 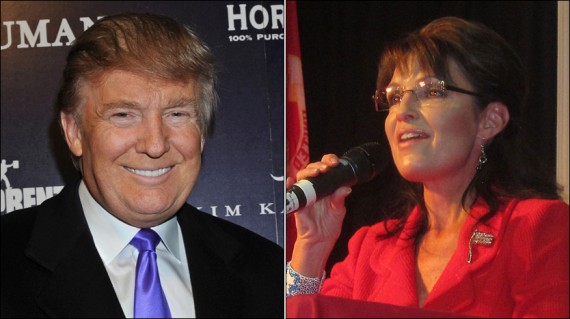 The last Gallup Poll has puts some perspective on the electoral chances of the GOP’s two most-talked about potential 2012 candidates:

PRINCETON, NJ — More than 6 in 10 registered voters nationwide say they would definitely not vote for Donald Trump or Sarah Palin for president in 2012, significantly more than say the same about possible Republican candidates Mitt Romney or Mike Huckabee, or about President Barack Obama.

The majority of U.S. voters at this point do not appear receptive to a Trump presidency. Sixty-four percent of registered voters have essentially rejected the television personality and businessman, saying they would definitely not vote for him. That leaves Trump with 7% of voters who say they definitely would vote for him, and another 28% who say they might consider it.

About as many voters nationwide (65%) say they would definitely not vote for former vice presidential candidate, former Alaska governor, and current television personality Palin.

Romney and Huckabee are in somewhat more positive positions than either Trump or Palin, but neither is positioned as well as Obama. Less than half of registered voters say they would definitely not vote for either of these two possible GOP candidates.

Given these numbers, explain to me again why anyone is taking either Palin or Trump seriously anymore.