I have perhaps been remiss in not commenting on this story earlier. Pakistan has narrowly avoided a serious crisis in its government:

ISLAMABAD, Pakistan — It was a signal moment in Pakistan’s political development: A huge demonstration forced the restoration of a dismissed chief justice, Iftikhar Muhammad Chaudhry, a symbol of democracy and the rule of law. The army did not stage a coup, but insisted that the government accept a compromise.

The deal between President Asif Ali Zardari and Nawaz Sharif, the leader of the main opposition party, does not herald a solution to the instability of this nuclear-armed nation. Nor does it ensure the Obama administration’s primary objective of tamping down the powerful Islamic insurgency that threatens both Pakistan and Afghanistan.

How the two Pakistani politicians will resolve their rivalry is but one of many uncertainties. Another is whether the domestic political struggle will allow them — or the military — to focus on their country’s deteriorating security situation.

British and U. S. officials are breathing a sigh of relief:

The United States and Britain have welcomed the Pakistani government’s decision to peacefully resolve its political crisis by reinstating deposed Supreme Court justices.

The diplomats had urged Pakistan’s leaders to defuse the week-long crisis, expressing concern it would divert Islamabad’s attention from the fight against al-Qaida and the Taliban.

Hours after the announcement, a suicide bomber killed 12 people and wounded 18 others in Rawalpindi, a garrison city just south of Islamabad.

Monday’s political developments capped a week of high drama that included a violent crackdown on anti-government protests across Pakistan.

To provide a little background for this story, Iftikhar Muhammad Chaudhry is a reform-minded judge who was appointed chief justice of Pakistan’s Supreme Court in 2005. He soon ran afoul of then-President Pervez Musharraf’s government and was removed from office by Musharraf amid charges of corruption in office. He refused. There were riots. The Supreme Court found that General Musharraf’s actions were illegal.

During the unrest in Pakistan during late 2007 and early 2008 Chaudhry and most of the other justices were placed under house arrest, from which he was not released until roughly a year ago.

Since his release Chaudhry has been at loggerheads with Benazir Bhutto’s widower, Azif Ali Zardari, who succeeded Musharraf. In February the Supreme Court disqualified Nawaz Sharif, the leader of the largest opposition party, from holding office on the basis of charges that Musharraf brought against him after ousting him in a coup.

The reason that I haven’t commented on this story is that, although it’s potentially extremely important, Pakistan is a large country and its politics is very complicated. Steve Hynd, who follows matters in Pakistan more closely than I do, makes the following observation:

Zardari is toast politically. He’ll try to hang on but this is humiliation for him after the lengths he went to in preventing it. Kayani obviously realised he needed a new frontman and refused to back any more escalation. I wonder if he can cut a deal with Sharif, or if some less well-known figure in the West will be selected.

But over and above the power struggles of the usual suspects, there’s a sea change here.

I wonder. I’m not so sure that any of the basics in Pakistan has changed. Pakistan is still a large, diverse country with a government that has little or no control over much of its territory and is barely holding on to power in the rest. There isn’t much to do other than wait and see. 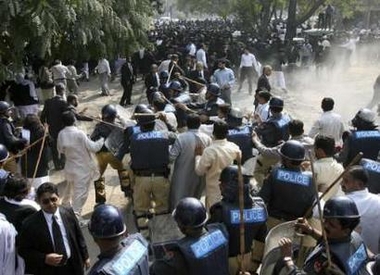