How the Vice-President's comment's on Meet The Press led to an historic Presidential announcement. 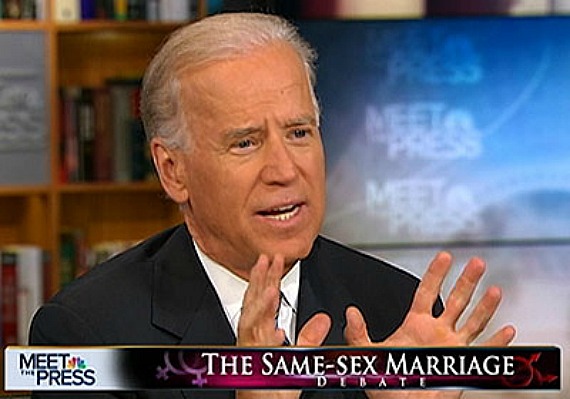 One part of the Robin Roberts interview that will probably interest people who are into process stories is President Obama’s acknowledgment that the Vice-President’s comments about same-sex marriage on Meet The Press ended up forcing him to make his position clear earlier than he had planned:

President Obama gently chided his vice president for forcing his hand on the issue of gay marriage, but said he would have gotten around to declaring his own change of mind anyway before going to the Democratic National Convention in North Carolina.

“He probably got out a little bit over his skis, but out of generosity and spirit,” Mr. Obama said when asked whether Mr. Biden had “jumped the gun” by going first a few days earlier.

“Would I have preferred to have done this in my own way, in my own terms, without I think there being a lot of notice to everybody? Sure. But all’s well that ends well,” he said in the interview as it was broadcast on “Good Morning America” on Thursday.

Of course, it wasn’t just the fact that Biden said something on a Sunday morning television program that set this in motion, it was the fact that the press picked up the story and ran with it after the White House and the Biden campaign sought to walk back Biden’s comments. From then on, it was a choice between either dealing with day after day of questions about this from the press corps or just get the announcement over with. If this had not happened yesterday, it’s rather obvious that the first question at the next Presidential press availability would have been about same-sex marriage, and the questions would’ve continued until the story became not Obama’s position on same-sex marriage, but why he was avoiding answering a straight question about the subject.

The other possibility that some have suggested is that this was all part of a strategy to roll out the announcement under the White House’s terms. If that’s the case, though, then how do you explain the fact that withing an hour after Biden had finished his appearance in NBC’s Washington studio the White House, the Obama campaign, and the Vice-President’s office trying to walk the statement back, and claiming that Biden hadn’t really said anything significant? How do you explain the ham-fisted performance by Jay Carney in front of the White House Press Corps on Monday and Tuesday? How do you explain the fact that the decision to book time with Robin Roberts was, according to every single report on the subject, made at the last possible minute?

I suppose it’s possible that’s all attributable to incompetence, but I think the most likely explanation is that, thanks to Joe Biden either consciously or unconsciously throwing the ball up in the air, Obama was forced to make this announcement much sooner than he had planned to.

Update: The New York Times reports that Vice-President Biden has apologized to the President for putting him in this position:

WASHINGTON — A few hours before President Obama offered his historic endorsement of same-sex marriage on Wednesday, Vice President Joseph R. Biden Jr. apologized to the president in the Oval Office for forcing Mr. Obama’s hand by airing his own views three days earlier, several people briefed on the exchange said on Thursday.

Mr. Biden declared in an interview on Sunday that he was “absolutely comfortable” with same-sex marriage, a position that went considerably further than the president’s “evolving” views on the matter and scrambled the White House’s carefully laid plans for confronting one of the most sensitive social issues in the election.

Mr. Obama, in an interview with ABC News, said the vice president had gotten “a little bit over his skis” but had done so “out of generosity of spirit.” The president bore Mr. Biden no lingering ill will, according to several officials, though the episode enraged Mr. Obama’s senior advisers in the White House and on the campaign.

It was easily the biggest incidence of crossed wires between the garrulous vice president and his more button-down boss, in an administration that has been marked by occasional eruptions by Mr. Biden. And its effect was magnified both because it involved a fraught social issue and because it came just as the general election campaign is heating up.

People who know both men said they did not believe that Mr. Biden had an ulterior motive in pre-empting the president, despite the fact that he has not ruled out running for president himself in 2016. Indeed, several gay rights activists said, whatever affection Mr. Biden’s candor might have won him with gay voters, he would still lag behind other potential Democratic candidates like Gov. Andrew M. Cuomo of New York or Secretary of State Hillary Rodham Clinton, who are both seen as champions of the gay community.

Mr. Biden has said nothing publicly since his remarks on the NBC program “Meet the Press.” But he has told staff members at the White House that he regrets putting the president in an awkward spot, several officials said. These officials declined to characterize his precise remarks to Mr. Obama, or Mr. Obama’s response.

With reports like this, I’m beginning to think that Biden may not have even been in the loop on the discussions between Obama and his political advisers about how to handle an announcement on same-sex marriage, in which case his response on Meet The Press was, as I suspected at the time, merely him stating his personal opinion with no ulterior motives.