A legendary statesman has passed. 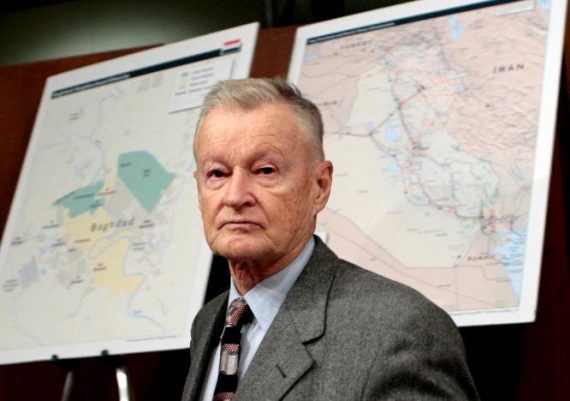 Zbigniew Brzezinski, the hawkish strategic theorist who was national security adviser to President Jimmy Carter in the tumultuous years of the Iran hostage crisis and the Soviet invasion of Afghanistan in the late 1970s, died on Friday at a hospital in Virginia. He was 89.

His death, at Inova Fairfax Hospital in Falls Church, was announced on Friday by his daughter, Mika Brzezinski, a co-host of the MSNBC program “Morning Joe.”

Like his predecessor Henry A. Kissinger, Mr. Brzezinski was a foreign-born scholar (he in Poland, Mr. Kissinger in Germany) with considerable influence in global affairs, both before and long after his official tour of duty in the White House. In essays, interviews and television appearances over the decades, he cast a sharp eye on six successive administrations, including that of Donald J. Trump, whose election he did not support and whose foreign policy, he found, lacked coherence.

Mr. Brzezinski was nominally a Democrat, with views that led him to speak out, for example, against the “greed,” as he put it, of an American system that compounded inequality. He was one of the few foreign policy experts to warn against the invasion of Iraq in 2003.

But in at least one respect — his rigid hatred of the Soviet Union — he had stood to the right of many Republicans, including Mr. Kissinger and President Richard M. Nixon. And during his four years under Mr. Carter, beginning in 1977, thwarting Soviet expansionism at any cost guided much of American foreign policy, for better or worse.

He supported billions in military aid for Islamic militants fighting invading Soviet troops in Afghanistan. He tacitly encouraged China to continue backing the murderous regime of Pol Pot in Cambodia, lest the Soviet-backed Vietnamese take over that country.

He managed to delay implementation of the SALT II arms treaty in 1979 by raising objections to Soviet behavior in Vietnam, Africa and Cuba; and when the Soviets went into Afghanistan late that year, “SALT disappeared from the U.S.-Soviet agenda,” as he noted in a memoir four years later.

Mr. Brzezinski, a descendant of Polish aristocrats (his name is pronounced Z-BIG-nyehv breh-ZHIHN-skee), was a severe, even intimidating figure, penetrating eyes and strong Polish accent. Washington quickly learned that he had sharp elbows as well. He was adept at seizing the spotlight and freezing out the official spokesman on foreign policy, Secretary of State Cyrus R. Vance, provoking conflicts that ultimately led to Mr. Vance’s resignation.

Zbigniew Brzezinski, the combative, visionary foreign policy intellectual who helped bring Jimmy Carter to the White House in 1976 and then guided him through a series of international crises that contributed significantly to Carter’s defeat at the polls four years later, died Friday night. He was 89.

The Polish-born strategist became a lightning rod for criticism over the roles he played in the Iranian hostage crisis, a broad but unrewarding diplomatic confrontation with the Soviet Union, and Carter’s innovative but unevenly implemented human-rights policy.

Dr. Brzezinski’s admirers focused on achievements that included the full normalization of U.S. relations with China, an expanded American role in the Middle East that produced an Israeli-Egyptian peace treaty, and skillful involvement behind the scenes that kept Poland’s 1980 Solidarity revolt against Communist rule alive and effective.

The author of more than 30 crisply argued books, Dr. Brzezinski gradually moved away from the strident advocacy of military power and the need to show resolve that made his reputation as an anti-Soviet hawk during his tenure as Carter’s national security adviser.

Once a muscular advocate of U.S. escalation in Vietnam, he gradually came to put more emphasis on the need to be diplomatically and politically supportive of nationalist aspirations in developing countries.

He strongly opposed the 2003 invasion of Iraq. The undeclared border war between Russia and Ukraine led him in 2014 to caution that the West should not bring Ukraine into a military alliance. That risked greater, more dangerous complications with Moscow, he argued.

But Dr. Brzezinski maintained that there was more continuity in his thinking than was apparent. “I didn’t have the time to correct distortions or misunderstanding of complex ideas,” he said in a 2014 interview on his career. “In any event, when I was in the White House, it helped me sell our positions to the real hawks in the administration. I took a lot of criticism that would otherwise have been focused on the president.”

Quick of wit and words and unwilling to back away from a fight of any dimension, Dr. Brzezinski was a captivating lecturer at Harvard and then at Columbia. As his powerfully written memoir, “Power and Principle” made clear in 1983, he was driven by a lifelong determination to bend leaders and events to his fierce will.

“He does not seem to realize how often his candor, when directed at others, looks like malice and, when directed at himself, looks like shameless egotism,” journalist Strobe Talbott, a future deputy secretary of state and Brookings Institution president, wrote in his review of “Power and Principle” in Time magazine.

Brzezinski remained an elder statesman of foreign policy right up to the end, routinely appearing on television (including on his daughter Mika’s show), the op-ed pages, and on the bookshelves. He was part of a triumvirate on National Security Advisors that would set the bar impossibly high for that post. Henry Kissinger redefined the job from 1969 to 1975, becoming far more important than the Secretary of State in Richard Nixon’s administration. He was followed by Brent Scowcroft, who reorganized the National Security Council into something like its modern form but saw himself as more policy coordinator than public voice, through the end of the Ford administration. Brzezinski served throughout the Carter administration, from 1977 to 1981, and was again much more influential than any of the cabinet secretaries. Scowcroft would reprise his role under Bush the elder from 1989 to 1993. Other major figures, including Colin Powell and Condoleeza Rice, would hold that post but none would have the stature in the role as those three; it’s quite possible that no one ever will.

I had the honor of meeting and talking with Brzezinski a few times in my time at the Atlantic Council (and also at a birthday party for Steve Clemons) and found him delightful and certainly friendlier than more generous with his time than he had any reason to be. In addition to his legacy as a statesman and public intellectual, he leaves behind three children who followed him into public life. His daughter, Mika, the journalist and “Morning Joe” co-host, is perhaps the most famous. His sons Ian and Mark have both served in high government posts in the national security arena. I worked with Ian at the Atlantic Council. My condolences to them all.

Bush, CIA at Odds on Iran