The leading candidate to succeed Hamid Karzai as President of Afghanistan is alleging that the runoff election is falling victim to corruption, and he’s pointing to Karzai himself as the person responsible:

KABUL, Afghanistan — Less than 48 hours after a runoff election to choose the next president of Afghanistan, the first signs of a looming political crisis emerged on Monday, with the campaign of Abdullah Abdullah claiming there had been widespread ballot stuffing and suggesting he was being set up for a defeat he would not accept.

A senior campaign official for Mr. Abdullah, who won the most votes in the election’s first round, said the candidate believes President Hamid Karzai and a coterie of advisers around him orchestrated the fraud. The aim, in the estimation of the Abdullah campaign, was either to install Ashraf Ghani, the other candidate for president, or to see Mr. Karzai use a postelection crisis as an excuse to extend his own term in office.

“Karzai is quite happy everything is tied up,” said the official, who spoke anonymously because the campaign was still collecting evidence of fraud. “They have engineered it in a way that goes far beyond the normal. It’s industrial-scale fraud.”

The official, who is familiar with Mr. Abdullah’s thinking, questioned the neutrality of electoral officials and the courts, saying the candidate had no expectation that complaints would be addressed. Campaign officials also accused Mr. Ghani of being complicit in fraud.

In his public statements, Mr. Abdullah has also suggested there was widespread fraud, though he has not leveled direct accusations at Mr. Karzai or other officials. Speaking to reporters on Sunday, Mr. Abdullah questioned initial reports that more than seven million Afghans voted (his campaign figures five million would have been more realistic). He also said his campaign staff had witnessed ballot stuffing in Kabul and elsewhere in favor of Mr. Ghani, and that some of the fraud was conducted by a senior elections officials.

Mr. Karzai’s office scoffed at the accusations coming out of the Abdullah campaign. “The accusation is absolutely baseless and wrong,” said Adela Raz, a spokeswoman for the president.

The campaign of Mr. Ghani, a former finance minister, said it would accept the official final result. But his campaign officials complained of fraud and violence on the part of Mr. Abdullah’s supporters, and accused Mr. Abdullah himself of violating campaign laws and stoking a crisis.

“If Dr. Abdullah is not announced as unconditional winner, then the country might be led toward a crisis — that is what they have been saying,” said Faizullah Zaki, a spokesman for Mr. Ghani, at a news conference on Monday. “We believe such statements are a serious violation of the constitution, electoral laws and the fundamental rule of election.”

The hard line from the Abdullah campaign, before all the ballots were even counted or any evidence of fraud publicly disclosed, propelled concerns that Afghanistan was headed for a political showdown at a crucial and delicate moment in a country with a history of civil strife.

If these allegations continue, and most especially if evidence that tends to support them becomes public, then the hope of a peaceful transition from Karzai to whomever his successor would be may go up in smoke. If that happens, then the Obama Administration’s plans for Afghanistan may end up getting thrown into chaos at the same time that they’re dealing with instability in Iraq and Russian encroachments in Ukraine.

The phrase “may you live in interesting times” comes to mind at the moment. 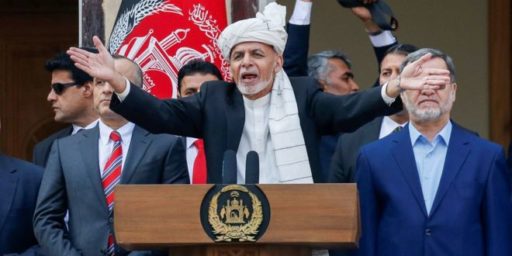