Not surprisingly, Congressional leaders on both sides of the aisle are lining up behind the President in the debate over Syria. 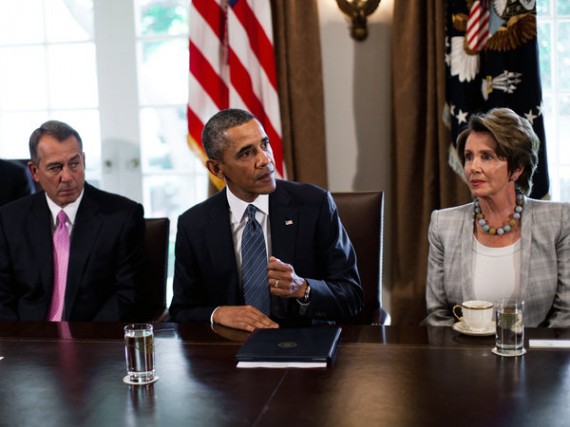 After meeting with President Obama this morning, House Speaker John Boehner, along with other members of House Leadership, has said he supports the President request for authorization to attack Syria:

WASHINGTON — Speaker John A. Boehner said on Tuesday that he would “support the president’s call to action” in Syria after meeting with President Obama, giving the president a crucial ally in the quest for votes in the House.

“Understanding that there are differing opinions on both sides of the aisle, it is up to President Obama to make the case to Congress and to the American people that this is the right course of action, and I hope he is successful in that endeavor,” Mr. Cantor said in a statement.

Mr. Obama and Vice President Joseph R. Biden Jr. summoned Mr. Boehner and other Republican and Democratic leaders to the White House as they intensified their push for Congressional approval of an attack on Syria. Conservative House Republicans have expressed deep reluctance about the president’s strategy, and winning Mr. Boehner’s approval could help the president make inroads with a group that has not supported him on most issues in the past.

Representative Nancy Pelosi, the House Democratic leader, said, “I believe the American people need to hear more about the intelligence.”

Ms. Pelosi said she did feel that Congressional authorization was a good thing, although not necessary, and that she was hopeful the American people “will be persuaded of” military action.

But, she said, people in her district were not convinced that military action was necessary. And she said the administration needed to continue making its case.

“There’s work to be done,” she said. “Some won’t ever be comfortable with it.”

Representative Eliot L. Engel, Democrat of New York, said, “Iran is watching us very carefully in Syria as a test of how we’ll respond when they have a nuclear weapon.” He added that the general consensus in the White House meeting was to support the president.

Harry Reid has previously indicated that he would be supporting the President’s request for authorization, while Mitch McConnell has yet to make any public statement on the matter. Essentially, though, today’s announcement means that pretty much the entireity of Congressional leadership is supportive of the the idea of giving the President authorization. The debate, most likely is going to be over the exact wording of whatever resolution Congress ends up debating. Even some Members of Congress who have said they support the President on this have said that “the devil is in the details,,” and they will need to see the exact language of the resolution before deciding how they will vote. Having been burned over the course of the past decade by broadly written authorizations for the use of force, it seems many members of Congress are unwilling to be fooled again.

In any case, it ought not come as a surprise that Congressional Leadership as well as the leadership of the Intelligence and other relevant committees on Capitol Hill. By the nature of their positions, they are more likely to support the Administration in things such as this. If there is going to be a revolt, it’s going to come from the rank and file in both Houses, especially in the House. We already know that John Boehner has had no small degree of difficulty keeping his caucus in line, and the libertarian undercurrent in a large segment of the House GOP Freshman and Sophomore classes could prove to be a problem for him. As for Pelosi, Democratic opposition to militarism in the past is fairly well known and it’s unclear how many members will be persuaded to vote for the resolution. In both cases, we also don’t know how hard the respective leaders will actually be in whipping voters for the resolution. In Boehner and Cantor’s cases, putting too much pressure on opponents of the  resolution is likely to increase resentment of both of them among the Tea Party crow. In the Senate, the question will be if Rand Paul and others decide to mount a filibuster attempt against a resolution when the time for a vote actually comes. To sustain that filibuster, they’d either need to hold the floor as long as necessary, or they’d need 40 votes on a cloture motion.

So, pay attention to that vote tracker I made note of earlier today.

Update: The Wall Street Journal is reporting that Senate Majority Leader Reid is confident he has the votes to pass the resolution. We shall see, I suppose.