Another European capital is on edge over fears of a terror attack. 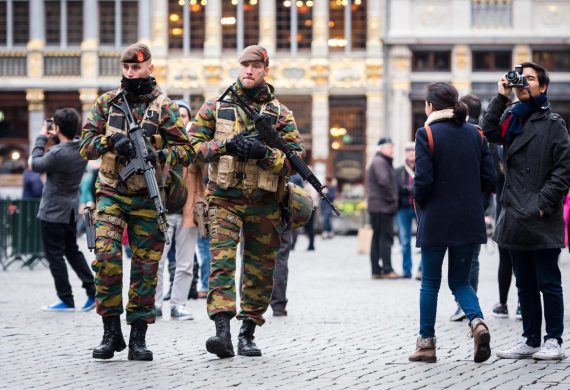 Brussels is on high alert as authorities search both for remaining suspects from the November 13th Paris attacks and apparent threats of a new attack in Belgium’s capital itself:

PARIS — The government abruptly shut down the metro system in Brussels, canceled sporting events and warned shoppers to stay away from malls as Belgium placed the capital on maximum alert early Saturday, citing a “serious and imminent” threat of attack.

In Brussels, armed troops stood guard in front of hotels and at major intersections. There was a scattering of shop closures. At least four of the Islamic State militants who attacked Paris came from the same immigrant neighborhood of Molenbeek in the Belgium capital.

Police continue to hunt for one of the Parisian attackers, Salah Abdeslam, a 26-year-old French national who lived in Brussels and may have returned after the attacks.

The new threat alert in Brussels comes after European countries agreed Friday to new steps aimed at securing Europe’s frontiers, as further evidence emerged that extremists in the terrorist attacks in Paris were using the region’s porous borders to slip between the continent and the battlefields of the Middle East.

Nine people were arrested in sweeps Thursday in Belgium in connection with the Paris attacks. Seven were released Friday without charges, and two remained in detention.

The Belgian federal prosecutor announced Friday that a person arrested in police raids in Brussels on Thursday was charged with participation in terrorist attacks and participation in the activities of a terrorist organization. No additional details were released.

The BBC cites reports that authorities have intelligence indicting high risk of a ‘Paris-style attack,’ and CNN says authorities fear an imminent and serious attack:

Belgium has placed Brussels at the highest terror alert level, citing a “serious and imminent threat that requires taking specific security measures as well as specific recommendations for the population.”

The announcement by the Crisis Centre of the Belgian Interior Ministry is advising the public to avoid places where large groups gather — such as concerts, sporting events, airports and train stations — and comply with security checks. The rest of the nation will maintain its current terror level.

“It suggests they have something specific and credible at the intelligence front pointing them in the direction that there may be a terrorist plot in the works,” he said. “It also suggests they don’t have a handle on it, that they don’t know where these plotters are or where they’re coming from.

The investigation since last Friday’s attacks, and this news of imminent threats of another attack, are bringing renewed attention to Brussels as an apparent center of terror cells and criminal activity in Europe. In addition to the connections to this month’s events there have also been connections discovered between the attempt over the summer to commit a terror attack on a train from the The Netherlands that was stopped by a group of Americans and Britons, and to the Charlie Hebdo attack back in January. Going back even further, there were links between the Molenbeek neighborhood in Brussels that is the subject of current law enforcement attention and both the 2004 Madrid train bombings and an incident in July of 2014 in which a man shot four people outside a Jewish Museum in Brussels. This raises obvious questions about what exactly it might be that Brussels in general, and certain parts of the city in particular seem to have become the center of terrorism in Europe.

CityLab took a look at that issue earlier this week:

On first glance, the place looks ordinary enough. Just across the canal from the hip Sainte Catherine neighborhood, it’s a not-unattractive area of low-rise Victorian tenements—gritty in appearance, but not markedly more so than many areas in generally rough-edged Brussels.

Behind the facades, however, Molenbeek has been in trouble for years. Poverty levels are high, and street and drug crime are common. With a reputation for gun crime, the media started calling it “Chicago on the Senne” (a reference to the Brusselsriver) as early as 2010.

These problems go hand-in-hand with a bleak outlook for residents. Local Muslims, who form 25 to 30 percent of the area’s population, talk in particular of limited educational and economic opportunities, as well as employment discrimination. As of January this year, 350 Belgian residentsare known to have joined ISIS in Syria—a minuscule fraction of the country’s Muslims, but nonetheless more per capita than any other state in Europe.

But these sorts of pressures rule for many Muslims across Europe, in areas that have seen little or no extremist activity. Not every rundown area with poor opportunities is a Molenbeek. So why has so much extremist activity clustered there?

The explanation, improbable as it may sound, rests in part on Belgium’s linguistic diversity and the political realms that come with it. Since 1963, the country has been divided into substantially self-governing language communities: the Dutch-speaking Flemish Region in the north and French-speaking Wallonia in the south (which also contains a small German-speaking community on its western edge). The Brussels capital region stands apart from both of these, a so-called third community that has a French-speaking majority but is officially bilingual. As Belgium’s two main language communities have become more politically self-contained, Brussels has to an extent been left to its own devices.

CityLab also quotes a Muslim man who spoke to Le Monde about the number of men who have left to join ISIS (since the original article is in French, I will assume that their translation is accurate):

“Please understand that if lots of young people have left for Syria, it’s above all because no one’s ever paid them any attention, until these fanatics gave them the impression that at last they were going to truly exist. Me, I study and I speak French, Arabic and Dutch.  But to look for a job I give the address of a friend, who doesn’t live in Molenbeek.”

Teun Voeten, a cultural anthropologist and war photographer who has lived in the Molenbeek neighborhood offers his own perspective in a piece in Politico Europe, In the first half of the piece, Voten describes how he first found Molenbeek because it was an affordable place to live that was largely tolerant to outsiders, but which eventually became more and more intolerant as the neighborhood came under the sway of people devoted to a strict interpretation of Islam. Under their pressure, local shops stopped selling alcohol, local women were accosted in public if the weren’t wearing a veil, and, perhaps most importantly, the unemployment rate slowly crept up to as high as 30 percent, the neighborhoods gay and lesbian community also became a target, and stores owned by Jewish citizens of Brussels that had been in the neighborhood for years became the target of harassment and began to close their doors seven years ago.  Much like CityLab, Voeten pins much of the problems in Molenbeek on the political situation in Belgium:

How did Molenbeek become Europe’s jihadi base? Essentially, it has to do with Belgium’s messy governance and the culture of denial that pervades the debate about Islam in the country. Molenbeek is a vibrant community, with narrow streets and a busy street life. There is a teahouse on every corner, a quiet mosque on every block, where people can congregate undisturbed. There are cheap apartments galore, no questions asked. Just like the guerrilla can hide in the jungle, jihadis feel safe in the disorganized Kashba of Molenbeek. The highway and the city’s busiest international railroad station is a stone’s throw away. It’s the perfect logistical base.

It is nearly impossible to explain to an outsider, but Belgium is a country of six governments, Brussels a city with 19 mayors. These many administrative posts are not filled with competent people. Security services are fragmented and tend to compete with one another. The lack of a strong, central authority may be one of the many quirks of this sometimes charmingly dysfunctional country, but just as it resulted in many botched trials — notably of the Brabant Killers, or “Nijvel Gang” who committed a series of violent raids between 1982 and 1985, and the Dutroux scandal in 1995, to name just two — it also creates the perfect breeding ground for potential terrorists.

But the most important factor is Belgium’s culture of denial. The country’s political debate has been dominated by a complacent progressive elite who firmly believes society can be designed and planned. Observers who point to unpleasant truths such as the high incidence of crime among Moroccan youth and violent tendencies in radical Islam are accused of being propagandists of the extreme-right, and are subsequently ignored and ostracized.

The debate is paralyzed by a paternalistic discourse in which radical Muslim youths are seen, above all, as victims of social and economic exclusion. They in turn internalize this frame of reference, of course, because it arouses sympathy and frees them from taking responsibility for their actions. The former Socialist mayor Philippe Moureax, who governed Molenbeek from 1992 to 2012 as his private fiefdom, perfected this culture of denial and is to a large extent responsible for the current state of affairs in the neighborhood.

Voeten also discusses how he and other journalists, including a woman of Moroccan descent who had ties to the neighborhood, who wrote over the years about what was happening in Molenbeek were ostracized for pointing out what now seems to be confirmed to all of Europe, that Brussels’ Molenbeek neighborhood had become a hotbed of jihadist activity.

In some sense, the issues that are raised by this look at one neighborhood in Brussels don’t seem all that different from stories we’ve heard over the years from other parts of Europe. For reasons that likely go back to Europe’s own long history of not really being very good at integrating outsiders into the community, Muslim immigrants in nations from Germany, to France, to the United Kingdom have been segregated into neighborhoods and, in many cases, subjected to laws that attempt to regulate their ability to practice their faith. France, for example, has made various attempts over the years to ban the niqab, the full face veil which many Muslim women in public. These efforts have led many women to say that their ability to work outside the home while following the tenants of their faith has been severely restricted, and have also led some institution to even attempt to crack down on women wearing the hijab, which is as form of the veil that doesn’t cover the face. Because of all of this, there have been some efforts to clarify the rules, but the point is that efforts in France and elsewhere to enforce conformity have arguably caused these communities to become inwardly focused. Factor into this the rise of nationalist parties on the right, which are only likely to benefit politically in the wake of the attacks in Paris, the failure of Muslim communities to integrate into the broader community while leaders in nation’s like Belgium seemingly sit back and let radicals take control of local communities, and the high rates of unemployment among most especially young men, and it’s not too difficult to see why these areas have becoming breeding grounds for the types of people who might be fertile for radicalization.

Photo of Belgian Army Soldiers In Brussels via Associated Press