French officials have confirmed that Abdelhamid Abaaoud, the man believed to be the plotter of last Friday's attacks in Paris, was killed in a police raid early Wednesday morning. This doesn't mean authorities in France or elsewhere in Europe are any less concerned about future attacks, though. 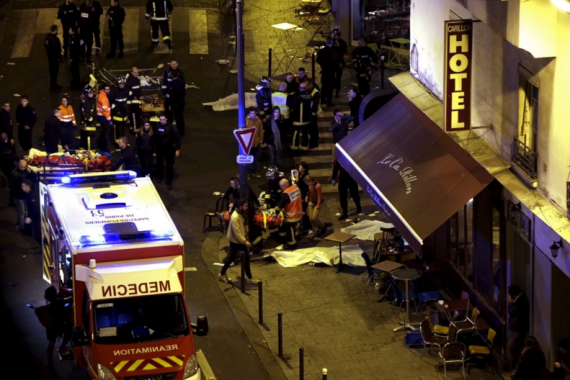 French law enforcement has confirmed that the chief suspect in the attacks in Paris last week, the man believed to be responsible for planning the attack and likely involved in plotting other attacks in France specifically and Europe generally, was killed during a raid in the early morning hours on Wednesday:

BRUSSELS — Abdelhamid Abaaoud, the Belgian militant suspected of orchestrating the Paris terrorist attacks, was killed in a police raid in the northern Paris suburb of St.-Denis early Wednesday, the French authorities announced on Thursday.

The death of the plot’s alleged ringleader ended one chapter of the intense criminal investigation that began on Friday night, when three teams of terrorists, in a series of closely coordinated raids, killed 129 people.

But many questions remained unanswered: how Mr. Abbaoud planned and organized the attacks; whether the Islamic State is planning additional assaults outside its stronghold in Syria and Iraq; and the identities of at least two other attackers.

Also on Thursday, the Belgian police conducted their own sweep in Brussels in relation to Bilal Hadfi, one of the dead Paris attackers. A spokesman for the Belgian federal prosecutor said that the houses of Mr. Hadfi’s friends and relatives were being searched. One person has been detained for questioning.

The latest search for suspectsMr. Abaaoud was the focus of a raid on Wednesday in St.-Denis, a suburb on the northern edge of Paris, that ended with eight people in custody.e Belgian prime minister, Charles Michel, asked Parliament to approve a variety of strict new security measures.

Separately, the White House said President Obama would not abandon plans to attend climate change talks in Paris at the end of the month despite security concerns in the city. The Paris prefecture has extended a ban on protests in the Paris area until Sunday.

At least some of the Belgian raids were being conducted in Molenbeek, the Brussels district that has emerged as a crucial link in the investigation of the attacks.

Molenbeek was the base for Mr. Abaaoud, the Belgian who is believed to have organized the attacks, and two Abdeslam brothers: Salah, who is still at large, and Ibrahim, who died after he detonated a suicide bomb at a cafe on Friday.

Molenbeek was the base for Mr. Abaaoud, the Belgian who is believed to have organized the attacks, and two Abdeslam brothers: Salah, who is still at large, and Ibrahim, who died after he detonated a suicide bomb at a cafe on Friday.

Mr. Abaaoud was the focus of a raid on Wednesday in St.-Denis, a suburb on the northern edge of Paris, that ended with eight people in custody.

It is not clear when and how Mr. Abaaoud became radicalized, but in 2010 he did spend time in prison, a notorious breeding ground of Islamic militancy in Europe. To the dismay of his family, which had not seen him show any religious zeal, Mr. Abaaoud suddenly moved to Syria in the beginning of 2014, according to experts on jihadist activity who track Belgian militants.

Soon after his arrival in Syria, where he stayed for a time in a grand villa in Aleppo used to house French-speaking jihadists, he explained his choice in a video: “All my life I have seen the blood of Muslims flow. I pray that God breaks the backs of those who oppose him” and “that he exterminates them,” he said.

This year, the French magazine Paris Match found a film that showed Mr. Abaaoud grinning and making jokes as he dragged corpses behind a pickup truck to a mass grave, a stunt that had already brought him to the attention of the counterterrorism authorities. He also persuaded his younger brother, Younes, who was still in Molenbeek and only 13, to join him in Syria in 2014. Younes left Belgium for Syria on his own without being stopped by the authorities.

Abdelhamid Abaaoud returned from Syria some time last year and organized a terrorist cell in Verviers, eastern Belgium, that the police broke up in a raid in January in which two of his associates died. In July, he was sentenced in absentia to 20 years in prison in connection with that plot, which was aimed at killing security officers.

Mr. Abaaoud managed to slip away, however, his trail growing cold in Greece, and is thought to have returned to Syria. In August, he was implicated in a foiled terror attack aboard a train from Amsterdam to Paris.

He then disappeared from police radar until Friday — when one of his plots finally succeeded.

The Wednesday raid in St. Denis, occurred before the sun had risen in Paris on Wednesday morning, was particularly fierce, involving hundreds of police, massive firefights, and at least one suicide bomber, a woman who managed to detonate her vest before being taken into custody. Outside of some apparent injuries and the loss of a bomb-sniffing dog, though, it doesn’t appear that French law enforcement suffered any real casualties in the raid and that they succeeded to the extent that they seem to have taken out what was likely the remnants of the terrorist cell behind last Friday’s attacks. Some reports indicated that the raid managed to essentially interrupt a second round of attacks that were already in the final stages, and the fact that there was someone on the scene with a fully armed suicide vest at the time of the raid would certainly seem to indicate that this was the case, but there haven’t been any real reports corroborating this claim or explaining what may have been the targets of these future attacks. Additionally, the fact that there was apparently still a cell of as many ten people made up of the two killed and eight arrested on Wednesday morning, raises obvious concerns about the possibility of other cells in France or elsewhere that may be planning attacks.

That last possibility, no doubt, is why authorities in both France and Belgium are seeking to continue and even expand the law enforcement steps that have been taken since Friday night:

Six new raids are underway near the Belgian capital of Brussels, France’s chief prosecutor has confirmed, as France seeks to extend the state of emergency introduced after last week’s deadly attacks.

The raids are connected to a suicide bomber who blew himself up outside the Stade de France during the series of coordinated attacks that killed 129 people across Paris.

“They are linked to Bilal Hadfi,” the prosecutor told AFP news agency, adding the raids targeted places involving Hadfi’s family, friends and other people directly linked to him.

The raids come as French prime minister Manuel Valls warned that France was at risk of a chemical or biological weapons attack, and the French National Assembly voted to extend the state of emergency for three months.

The government initially imposed the state of emergency on Saturday, giving police extended powers to search and detain suspects.

The French Senate is expected to debate and approve the extension on Friday, after which it can go into effect.

Mr Valls warned of the dangers still faced by France as he opened a parliamentary debate about extending an extraordinary package of security measures for three months.

“We must not rule anything out,” Mr Valls said.

“There is also the risk from chemical or biological weapons.”

Under one of the measures being adopted in France, police officers will be allowed to carry weapons when they are off duty.

Officers will be allowed to use their guns in the event of an attack providing they wear a police armband to avoid “any confusion”, according to a directive from police commanders seen by AFP.

“More than ever, it’s time for Europe to adopt the text… to guarantee the traceability of movements, including within the union. It’s a condition of our collective security,” he said.

With the death of Abdelhamid Abaaoud confirmed, one of the main focuses of law enforcement in France and Belgium now is the largely unknown, or at least publicly unidentified, person who constructed the suicide vests used by the two attackers outside the soccer stadium Friday night, and presumably also the vest detonated by the woman during Wednesday’s police raid. Obviously, as along as that person is at large the possibility of future attacks remains high, as does the risk that other cells may have been “activated” by what has happened in France and Belgium both in the form of the attacks themselves and the attempted law enforcement crackdown. At the very least, it seems fair to say that much of Europe remains on a hair trigger notwithstanding the confirmation of Abaaoud’s death, and that this is likely to remain the case for some time to come.