Hillary Clinton eked out the narrowest of wins in Iowa, but now she's headed to New Hampshire where Bernie Sanders holds a seemingly insurmountable lead in the polls. 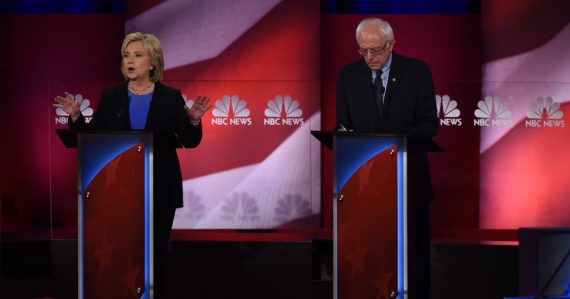 Heading into the Democratic caucuses last night in Iowa, the polls were telling us that the race between Hillary Clinton and Vermont Senator Bernie Sanders was exceedingly close. After seeing Clinton take the lead in the state late in 2015, Sanders started to close the gap again in the Hawkeye State in the new year to the point where, as of the final polls released yesterday, Clinton had a narrow lead over the Vermont Senator, and some late polling suggested that the gap had narrowed even further than the Des Moines Register poll released Saturday suggested. As it turns out, the polling that gave Clinton an average four point lead understated just how close the race in Iowa was all along. This morning, while it does appear that Clinton eked out a narrow victory, the fact that she leads Sanders by less than a percentage point presents Clinton with a headache heading into a New Hampshire contest where she continues to trail Sanders by a wide margin:

DES MOINES — Hillary Clinton and Senator Bernie Sanders of Vermont were locked in an intensely tight race in the Iowa caucuses on Monday as Mrs. Clinton’s strong support among women and older voters was matched by the passionate liberal foot soldiers whom Mr. Sanders has been calling to political revolution.

The close results were deeply unnerving to Mrs. Clinton and her husband, former President Bill Clinton, as well as her advisers, some of whom had expressed growing confidence in recent days that they had recaptured political momentum after weeks when Mr. Sanders was drawing huge crowds and rising in the polls. The Clintons had appeared optimistic at rallies over the weekend, thanking Iowans for their support as much as urging them to turn out to vote.

The close vote means that Mrs. Clinton and Mr. Sanders are likely to split Iowa’s share of delegates to the Democratic convention, and Mr. Sanders will be able to argue that the Iowa result was a virtual tie.

The Clinton team was counting on its huge, well-trained army of volunteers, covering all of Iowa’s 1,681 voting precincts, to counter the enormous enthusiasm of voters who jammed into events to hear Mr. Sanders. But his well-financed Iowa organization was able to convert the energy of his crowds into voters on Monday night, as he drew huge numbers of first-time caucusgoers, young people and liberals who responded to his rallying cry against the nation’s “rigged economy.”

The virtual tie between the two candidates instantly raised the stakes for their next face-off, the primary next Tuesday in New Hampshire. Mr. Sanders holds a solid lead in polls there and has the advantage of being from Vermont; candidates from neighboring states have won the state’s primary in recent decades, and Mr. Sanders is admired in the state.

Clinton advisers said late Monday night that Mr. and Mrs. Clinton were discussing bringing on additional staff members to strengthen her campaign operation now that a pitched battle may lie ahead against Mr. Sanders. The advisers said they did not know if a significant staff shakeup was at hand, but they said that the Clintons were disappointed with Monday night’s result and wanted to ensure that her organization, political messaging and communications strategy were in better shape for the contests to come.

At her caucus night party here, Mrs. Clinton sought to put the best face on a tight result that had nearly half of Democrats voting against her. “As I stand here tonight breathing a big sigh of relief — thank you, Iowa!” she said, joined on stage by Mr. Clinton and their daughter, Chelsea.

“I am excited about really getting into the debate with Senator Sanders about the best way forward to fight for us and America,” Mrs. Clinton said.

Mr. Sanders, who spoke shortly after she finished, laughed as his crowd chanted “feel the Bern,” his campaign’s unofficial slogan. “Thank you — Iowa, thank you!” Mr. Sanders said.

Noting that he began his Iowa campaign with “no name recognition” and “no money,” Mr. Sanders drew ecstatic cheers as he said he took on the Clintons — “the most powerful political organization in the United States of America” — and drove them into a tie.

The results suggested that Mr. Sanders would be a strong opponent of Mrs. Clinton’s for a long time. The voters sent a clear message that income inequality weighed on their minds, with more than one in four Democratic voters saying the issue was the most important facing the nation, according to surveys of voters leaving the polls.

Mr. Sanders’s strong performance in Iowa was a significant milestone in a campaign in which he began 40 percentage points behind Mrs. Clinton when they both declared their candidacies last spring. Many Democrats privately dismissed Mr. Sanders as a left-wing fringe candidate who had no real chance of defeating Mrs. Clinton anywhere other than his home state of Vermont, where his democratic socialist politics were not as exotic as many Democratic Party leaders found them.

But Mr. Sanders proved to be a rigorously disciplined candidate, delivering the same powerful message inveighing against establishment politics, Wall Street and the benefits enjoyed by the wealthy and the well-connected.

The Clintons are now hoping for a surprise performance in New Hampshire, where they have campaigned and connected with voters since 1992, when Mr. Clinton came in a strong second place in the state’s primary, and Mrs. Clinton won the 2008 primary over Barack Obama, then a senator who had earlier won the Iowa caucuses.

Steve Duprey, a Republican national committeeman from New Hampshire, said if Mrs. Clinton ekes out a clear victory in Iowa, however small, it would give her “some much-needed momentum in New Hampshire — and if she can build that into a New Hampshire win, I think it will start the death rattle of the Sanders campaign.”

George Maglaras, a Clinton supporter who is a commissioner of Strafford County, N.H., predicted that Mrs. Clinton would have a lock on the Democratic nomination if she won New Hampshire on top of a close race in Iowa.

Mrs. Clinton, 68, performed well on Monday night among women, moderates and older Iowans who rallied behind her promises to build on President Obama’s policies and fight for the needs of families. Her shifts to the left on trade, the environment and gay marriage helped her win over Democrats, though not the many liberals and young people who mistrusted her pragmatic style of politics and her ties to wealthy interests and Wall Street.

Mr. Sanders, 74, drew strong support from first-time Democratic caucusgoers, who accounted for more than four in 10 voters, according to polls conducted by Edison Research of voters as they entered caucus locations throughout the state Monday evening. But these voters made up a smaller share of the Democratic electorate on Monday than they did in 2008, when 57 percent of Democratic caucusgoers were first-timers. Mr. Sanders was also widely supported by younger voters and independents, but voters 65 and older accounted for about three in 10 Democratic voters and they strongly favored Mrs. Clinton.

Many political pundits have already observed this morning that what appears to be a narrow victory in Iowa over an insurgent candidate puts Clinton in much the same position she was after Iowa eight years ago. Back then, of course, Clinton ended up finishing in third place behind Barack Obama and John Edwards, which arguably put her in a weaker position than she is today. As I noted yesterday, though, the obstacles that Clinton had to overcome in the Granite State eight years ago were far less daunting than they are today. Back then, Clinton had led in New Hampshire for several months in the state before being overtaken by Obama late in 2007. Obama’s polling lead in the state, though, was far smaller at its peak than Bernie Sanders’ lead is today. The final RealClearPolitics numbers back then gave Obama an eight point three point lead over Clinton and Clinton went on to win the primary by just over 2.5 percentage points. As of today, by contrast, Bernie Sanders has an average lead in New Hampshire of eighteen points according to RealClearPolitics and just over seventeen points according to Pollster. This includes a UMass at Lowell poll that gives Sanders a thirty-one point advantage over Clinton. That is going to be a far more difficult lead for Clinton to overcome over the course of just one week, especially given the energy that Sanders’ surprisingly good performance in Iowa is likely generate for him in a state where he is already a well-known political figure in neighboring Vermont. If Clinton can somehow pull off even a narrow win in New Hampshire, of course, then she would go a long way toward putting Sanders behind her. If she can’t, which seems likely, then this race is going to last far longer than many Democrats anticipated even if the ultimate outcome seems clear.

As for the results in the Democratic race in Iowa, what they make clear is that Sanders is a serious candidate going forward and that Clinton is going to have to treat him as such if she’s going to close out the race for the nomination in a way that doesn’t result in the same kind of bruising fight she had with Barack Obama eight years ago. Much as with Donald Trump, there were questions heading into last night whether the Sanders campaign could turn poll numbers into votes and whether they had the kind of ground game that would be needed to be competitive and it’s clear that the answer to that question is an emphatic yes. This is of particular concern for Clinton going into New Hampshire, of course, because it suggests that Sanders will be able to take advantage as his massive lead there quite easily unless Clinton can find a way to change the minds of a significant number of the people who presently say that they are backing Sanders. Given the fact that the appeal Sanders has is emotional and populist, while Clinton’s argument is more broad based, that isn’t going to be easy, Moreover, the fact that Sanders has made very few mistakes so far in this race suggests that the burden will be on Clinton to find a way to win rather than hoping that Sanders will stumble at any point in the next week.

As I’ve said before, ultimately losing New Hampshire likely wouldn’t be fatal to Clinton. She continues to have massive and seemingly insurmountable leads in South Carolina, Nevada, and other future primary states. Additionally, the fact that she at least performed strongly in Iowa means that she won’t be dealing with the prospect of back-to-back losses in the first two contests of the 2016 primaries. Nonetheless, this race obviously isn’t proceeding the way the Clinton campaign expected and the resilience of Bernie Sanders, even in the face of evidence that he’ll likely fall well short of actually becoming the Democratic nominee, means that this isn’t going to be the cakewalk that Clinton and her advisers may have been anticipating.