As noted recently, the American presidency is something of a fraternity that seems to create a bond between its few living members that often transcends politics. We’ve seen examples of this recently at the World War II Memorial dedication ceremonies and the tributes to former President Ronald Reagan last week. The latest example was the glowing reception given to former President Bill Clinton by President Bush yesterday at the unveiling of the former’s official White House portrait.

WaPo – The Picture of Bipartisan Camaraderie 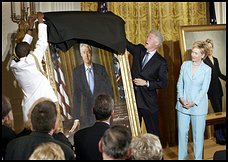 The line about “so much promise to no great purpose” that had Republicans cheering at their 2000 convention was forgotten. So was the unusually ugly transition — with the exaggerated allegations about missing “W” keys on computers and mischief aboard Air Force One. And for a moment there was no mention of the 2004 campaign.

Instead, President Bush yesterday welcomed his predecessor to the White House, for the first time since he moved out, with the honorific previously bestowed only on members of his family — a number.

In fact, Bush and 42 — a Democrat named Bill Clinton — entered the East Room together to the strains of “Hail to the Chief” and for 45 minutes transformed the White House into an island of bipartisan humor and graciousness in a roiling election-year sea. 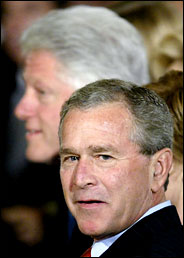 Saying that “the years have done a lot to clarify the strengths” of former President Bill Clinton, President Bush today unveiled the official portraits of Mr. Clinton and his wife, Senator Hillary Rodham Clinton, that will hang in the White House along with those of other former presidents and first ladies dating to George and Martha Washington.

It was the third joint public appearance in recent weeks for Mr. Bush and Mr. Clinton, after the dedication of the World War II Memorial just over two weeks ago and the state funeral of former President Reagan last week. Today, in the East Room, Mr. Bush and Mr. Clinton heaped praise on each other in an occasion that called for civility, and not for the partisan politics that has defined this election season.

Mr. Bush said of his predecessor: “As chief executive, he showed a deep and far-ranging knowledge of public policy, a great compassion for people in need, and the forward-looking spirit that Americans like in a president.”

And Mr. Clinton returned the compliment: “This president, by his generous words to Hillary and me today, has proved once again that in the end, we are held together by this grand system of ours that permits us to debate and struggle and fight for what we believe is right.”

It was an odd confluence of Republicans and Democrats in the White House today, with Mr. Bush and his wife and aides playing host to the Clintons, their daughter, Chelsea, and about a dozen former Clinton aides from their White House days. The talk was mostly of history and legacy. Still, given that this was Washington and involved a Republican president and a Democratic former president, politics became a subtext.

Perhaps it was inevitable, since Mr. Bush won election after promising “to restore honor and dignity” to the White House after the eight-year tenure of Mr. Clinton, who had defeated Mr. Bush’s father for re-election in 1992.

In talking of Mr. Clinton and of his path to the White House, Mr. Bush made gentle fun of himself. He talked of Mr. Clinton as an accomplished student whose teachers and friends always knew was headed for greatness. This was in contrast to Mr. Bush’s own well-known “C” course work in school, even when he was at Yale, a school the Clinton’s also attended and where they met.

He talked about how Mr. Clinton won his first statewide office at age 30, and was sworn in as governor of Arkansas at the age of 32. He was also the first Democrat since Franklin Roosevelt to win a second term in the White House.

“And I could tell you more of the story, but it’s coming out in fine bookstores all over America,” Mr. Bush said to laughter, as he referred to Mr. Clinton’s biography, which is expected to come out in bookstores next week.

WaPo has the transcript of the ceremony, and Bush’s remarks went beyond the couple of short clips I saw on television last night.

It’s great to see Chelsea.
The fact that you survived your teenage years in the White House… (LAUGHTER) … speaks to the fact you had a great mom and dad.

It’s good to see so many who served our nation so ably in the Clinton administration. Thank you all for coming back. Thanks for your service to the country.And welcome back to the White House. We’re really glad you’re here. And I know the president is, as well. As you might know, my father and I have decided to call each other by numbers. (LAUGHTER) He’s 41, I’m 43. It’s a great pleasure to honor number 42.

The years have done a lot to clarify the strengths of this man. As a candidate for any office, whether it be the state attorney general or the president, Bill Clinton showed incredible energy and great personal appeal. As chief executive, he showed a deep and far- ranging knowledge of public policy, a great compassion for people in need, and the forward-looking spirit that Americans like in a president.

Bill Clinton could always see a better day ahead and Americans knew he was working hard to bring that day closer. Over eight years it was clear that Bill Clinton loved the job of the presidency. He filled this house with energy and joy. [LAUGHTER? -ed. Apparently not.] He’s a man of enthusiasm and warmth, who could make a compelling case and effectively advance the causes that drew him to public service.

Clinton, in turn, was quite gracious as well.

But I say this because the president, by his generous words to Hillary and me today, has proved once again that in the end, we are held together by this grand system of ours that permits us to debate and struggle and fight for what we believe is right. And because it’s free, because it is a system of majority rule and minority rights, we’re still around here after over 200 years. And most of the time, we get it right. And I’m honored to be a small part of it.

Mr. President, thank you again for having us. It was an honor to join you for the third time in a few days. At President Reagan’s funeral, at the World War II memorial. I also want to congratulate you on your father’s successful parachute jump yesterday. (LAUGHTER) I didn’t want him to do it, because the last time he jumped out of an airplane, I fell off a nine-inch step and nearly tore my leg off. (LAUGHTER)

This is a great country. Politics is noble work. I’ve just been doing some interviews in connection with my book, and I told Mr. Ryder (ph) yesterday, I said, “You know, Most the people I’ve known in this business, Republicans and Democrats, conservatives and liberals, were good people, honest people, and they did what they thought was right. And I hope that I’ll live long enough to see American politics return to vigorous debates where we argue who’s right and wrong, not who’s good and bad.”

My experience is, most the people I’ve known in this work are good people who love their country desperately. And I am profoundly grateful that for a brief period I had a chance to be one of them.

This is fundamentally right, I think. I was no big fan of many of Clinton’s policies and thought he dishonored the office with his conduct at times. Still, he devoted eight years to the most stressful job imaginable and tried to make the country better, as all presidents have. It’s useful to set partisan politics aside occasionally and acknowledge the sacrifice that people make in the public’s service.

There’s no dishonor is emphasizing the positive in the spirit of an occasion. Just as it was inappropriate to be too critical of Reagan Administration policies during the week of mourning, so, too, was it right to set aside the real differences between these men for this occasion. There will be plenty of time to emphasize those differences between now and November.

Taegan Goddard, Atrios, and Harley weigh in as well.