Democrat Pundits Don’t Get It

Analysts at the major papers are still struggling to understand how Bush could have won even though he’s an extreme right wing nutjob who doesn’t appeal to anyone they know. Even setting aside MoDo’s asinine comments–she’s a “humorist,” after all–it’s rather clear that too many people who write columns for a living travel in very narrow circles.

Although Bush in Tuesday’s vote made some inroads among swing groups such as Latinos and married women, exit polls and voting results in key counties across the nation suggested he won his second term mostly by increasing the GOP strength in places where the party was already strong Ã¢€” especially rural, small-town and fast-growing exurban communities.

To many Democratic analysts, the clear message of these results is that even with its growing strength among upscale social moderates, the party will find it virtually impossible to reach a presidential or congressional majority without regaining at least some ground with socially conservative voters. “We’ve got to close the cultural gap,” said Al From, founder of the Democratic Leadership Council, a leading centrist party group.

“Their coalition is very stable but it’s very narrow,” said John C. Green, a University of Akron political scientist who specializes in the relationship between religion and politics. “It will be interesting to see if any Republican besides Bush can succeed without finding ways to expand it. There’s not much margin of error in this coalition.”

It’s unclear how a majority coalition can be considered “very narrow.” I’d also point out that the “key counties” where Bush’s strength is concentrated happen to cover around 90% of the country. Again.

A Victory for ‘Values,’ but Whose? (Joel Achenbach, WaPo)

To understand why America skewed red on Election Day, you might talk to Gary Bauer, the conservative activist, former Republican candidate for president and creator of an organization called Americans United to Preserve Marriage. The group spent a million dollars in Ohio, Michigan and across the country. It warned voters that a nation led by John Kerry might be one in which homosexuals could get married — and not just two at a time. “Most Americans don’t want to sit down and explain to their children why they live in a country where men can marry men, why there’s polygamy — because that would naturally follow, we would argue,” Bauer said yesterday. If two men could marry, so could three, four, or more, Bauer said. Moreover, he said, “textbooks could not talk about ‘mothers’ and ‘fathers.’ They could only talk about ‘parents.’ ”

Not long ago, this might have been considered a somewhat fringe viewpoint, a trifle alarmist — “polygamy” just isn’t something you hear people talking about in Washington political circles — but gay marriage now seems essential to any conversation about the 2004 election. The exit polls pointed to a huge boost for Republicans from voters who said their biggest concern was “moral values.”

Not long ago, even those on the far left of American culture were what we would now term “homophobic.” (Op. cit., Arlo Guthri: “And if two people, two people do it, in harmony, they may think they’re both faggots and they won’t take either of them.”) Considering that, in the “Will and Grace” era, roughly two thirds of the people in 11 states–including liberal havens like Oregon–voted against gay marriage Tuesday, one wonders how Achenbach defines “fringe.”

In terms of the social values Friedman prefers, the country is far more liberal now than it’s ever been. Unfortunately for him, the leadership of the Democratic Party are even further to the left. The Democratic center is probably closer to the Bush platform on abortion. But Kerry and company won’t won’t even stand up against partial birth abortion–which 90% of the country finds repugnant–out of fear of offending extreme elements of its base. This isn’t Europe. The U.S. has always been a profoundly religious country and its public policy has always reflected that. The reason that it’s become a mobilizing issue over the last thirty-odd years is because the courts and certain elements of the Democratic Party are trying to govern as if that wasn’t the case.

The Day the Enlightenment Went Out [RSS] (Garry Wills, NYT)

Can a people that believes more fervently in the Virgin Birth than in evolution still be called an Enlightened nation?

America, the first real democracy in history, was a product of Enlightenment values – critical intelligence, tolerance, respect for evidence, a regard for the secular sciences. Though the founders differed on many things, they shared these values of what was then modernity. They addressed “a candid world,” as they wrote in the Declaration of Independence, out of “a decent respect for the opinions of mankind.” Respect for evidence seems not to pertain any more, when a poll taken just before the elections showed that 75 percent of Mr. Bush’s supporters believe Iraq either worked closely with Al Qaeda or was directly involved in the attacks of 9/11.

The secular states of modern Europe do not understand the fundamentalism of the American electorate. It is not what they had experienced from this country in the past. In fact, we now resemble those nations less than we do our putative enemies. Where else do we find fundamentalist zeal, a rage at secularity, religious intolerance, fear of and hatred for modernity? Not in France or Britain or Germany or Italy or Spain. We find it in the Muslim world, in Al Qaeda, in Saddam Hussein’s Sunni loyalists. Americans wonder that the rest of the world thinks us so dangerous, so single-minded, so impervious to international appeals. They fear jihad, no matter whose zeal is being expressed.

It’s hard to even respond to such nonsense. Suffice it to say that this viewpoint, widely held among its leadership, is why the Democrats have such a difficult time putting together a governing coalition.

The devastation of Tuesday’s returns cannot be minimized. The transformation of the “Solid South” from Democrat to Republican was completed. Not only were all 11 states of the old Confederacy carried by President Bush, but the pickup of all five Senate seats left vacant by retiring Democrats means 18 of the region’s 22 senators are Republican. Domination of Congress by the GOP now enters its second decade with Democrats largely restricted to enclaves on both coasts and some Midwestern industrial areas.

Democrats confront a grim future. Bush’s 3.5-million-vote edge in the popular vote reflects a party out of touch with the country on social issues, the role of government and the war against terrorism. Democrats face the bitter reality of minority party status and what to do about it.

Facing reality is difficult because of unjustified confidence among high-level Democrats. All year long I was told by them that Kerry would win comfortably. They dismissed Republican inroads on normal Democratic voters by the same-sex marriage issue. They laughed off warnings from defecting Democratic Sen. Zell Miller of Georgia that the party had lost rural America.

Democrats who want to become more than just the party of the urban areas would do well to listen to Novak. Or, if they prefer one of their own, to David Broder (An Old-Fashioned Win, WaPo):

This was not, as some embittered Democrats had forecast, the result of voter intimidation or suppression. Democrats and their allies in labor and liberal organizations did their best job ever of mobilizing their base, only to see the Republicans match and exceed that effort.

The bottom line is that more Americans agree with the Republican platform–including its stances on the cultural issues–than with the Democratic platform. That may change over time; despite claims by many on my side, I believe we’re moving steadily toward the left culturally. Despite the recent referrenda, I believe majorities in a few states will come around on the gay marriage issue in the near future and that it will happen in most states within the next twenty years or so.

There’s no such thing as a permanent majority in American politics, as the parties and the population constantly evolve. It wasn’t long ago that California’s Electoral votes were virtually guaranteed for the GOP. The Republicans have to avoid getting too cocky with their new mandate. But the Democrats also have to stop thinking of people who live in the Red part of the map–that is to say, almost the entire country–as some sort of alien life form if they want to win again. Nominating someone other than Hillary Clinton in 2008 would be my suggestion. 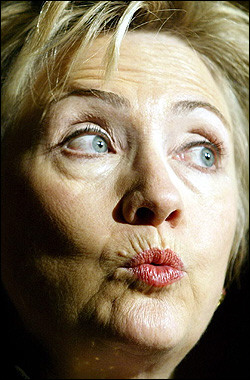