The passing of President Reagan has had the unfortunate side effect of sidetracking some of the coverage of the 60th Anniversary commemoration of the Normandy Invasion. A 60th anniversary (unlike, say, a 50th or even 75th) isn’t usually something we pay especial attention to. And we’ve certainly showered a lot of attention on the World War II generation of late, what with “Saving Private Ryan,” “Band of Brothers,” the Greatest Generation phenomenon, and last week’s dedication of the WWII Memorial on the National Mall. Still, this is the last roundish numbered anniversary that is likely to have many veterans of that epic day still around to reflect on the price paid for the victory over Fascism. 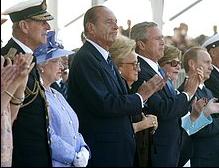 Thousands of aging and ailing D-Day veterans came together — Americans, Britons, Canadians, French and others — some in full uniform with medals, many supporting themselves on canes or in wheelchairs, for what will likely be the last major reunion of what is now commonly called The Greatest Generation. With most of the D-Day veterans now in their 80s, and dying at a rate of more than 1,000 a day, today’s ceremony bore the mark of a valedictory for those who fought, as well as a tribute to the fallen.

“In the trials and that sacrifice of war we became inseparable allies,” President Bush said at the same ceremony at Colleville, facing a sea of white stone crosses and Stars of David, marking the 9,387 Americans gravesites. “The nations that battled across this continent would become trusted partners in the cause of peace, and our great alliance of freedom is strong and it is still needed today.”

Later, at the main flag-draped ceremony at Arromanches, the midway point along the Normandy beaches where American, British and Canadian forces landed at dawn 60 years ago, Chirac said, “France will never forget what it owes America, its steadfast friend and ally.” Like the rest of Europe, he said, “France is keenly aware that the Atlantic Alliance, forged in adversity, remains, in the face of new threats, a fundamental element of our collective security.”

Today’s event took on the form of a mini-summit, with Bush, Chirac, Prime Minister Tony Blair of Britain, Queen Elizabeth II, Russian President Vladimir Putin, Canadian Prime Minister Paul Martin, Australian Prime Minister John Howard, and the leaders of Belgium, Norway, New Zealand and the Netherlands all in attendance for a working lunch at a Medieval chateau that survived the Allied bombing of Caen and now serves as city hall.

Also in attendance was German Chancellor Gerhard Schroeder, making the first appearance ever at a D-Day commemoration by a German leader. Schroeder was born just two months before the invasion began, and for many Germans, his presence here marked a long-sought recognition that the post-war period is over, and Germany has resumed its place as a full and equal partner in the Western alliance.

The presence of a German chancellor at a D-Day commemoration would have been unthinkable for the 40th, or even 50th anniversary, because the old animosities were still too raw. But Chirac’s surprise invitation to Schroeder this year was as much a measure of the personal warmth between the two leaders — who became close last year after jointly opposing the Iraq war — as a sign of how far Europe has come in burying its bloody past.

While I agree with Stephen Green that we must not forget the role that Nazism played in this war or retroactively turn the Germans into victims, it’s certainly fitting to have the current generation of Germans participate in the commemoration. Despite the unpleasantness over Iraq, the Germans have long been very much part of the Western bloc. If anything, it may serve as a reminder to the Germans (and the French) that freedom sometimes comes at a high price–but that appeasement is usually even more costly.

Ralph Peters captures the bravery of those who stormed the beaches quite nicely:

If courage is about fear overcome, they must have been courageous men, indeed, those infantrymen packed into wooden-flanked boats painted to look like steel. They didnÃ¢€™t cower in the vomit-drenched holds, but plunged ahead as the ramps dropped and went forward. Other craft dropped their ramps too soon. And soldiers drowned before they entered the battle.

Under fire and swept out of their approach lanes by strong currents, landing craft went astray, dropping men directly in front of enemy guns. Elsewhere, luck took other boats to safer sites than planned. Units mixed together. Chains of command disappeared.

The beach became a bloody muddle. The generals off-shore couldnÃ¢€™t see what was happening on land. Communications failed, with radios ruined by seawater. Early reports from “Bloody Omaha” suggested a disaster.

One by one, squad by squad, platoon by platoon, then company by shattered company, men got up from the shelter of a seawall or from behind American wreckage and began the grim work of fighting their way up the bluffs. Sergeants, lieutenants and captains led the way, suffering the high casualties good leaders always do in combatÃ¢€™s confusion.

In an era when the death of a single volunteer soldier can cause leaders to reconsider their commitment to a mission, the fact that thousands of men went to their deaths with reckless determination is even more astounding in retrospect.

Sixty years ago today, the free world held its breath. In America, daily life paused almost completely, subdued by the news that the invasion of Europe Ã¢€” D-Day Ã¢€” had begun. From the 21st century, we try to imagine the scale of what went forward in that gray dawn after years of preparation Ã¢€” the ships and men and matÃƒ©riel, the reserves of willpower and determination. What we sometimes forget to imagine is the almost prayerful nature of the day, the profound investment of hope and fear it entailed. It was a day in America and in Europe when civilians as surely as soldiers felt the whole of their lives concentrated on the outcome of a few hours. There has not been another time like it, when we knew that history was about to turn before our eyes.

The only possible exceptions that come to mind are the Cuban Missile Crisis and the September 11 attacks. In the first instance, we came much closer to nuclear war with the Soviets than the public would know for decades. The fate of the country did indeed depend on the outcome of a few hours, although it differed from D-Day in that the power rested entirely with a few politicians, not a large citizen army. On 9/11, we certainly knew that history was turning before our very eyes. The nature of the change, though, will unfold over years, perhaps decades, and will be rather difficult to capture in a movie.

Among the eloquent oratory attending the WWII Memorial and the D-Day anniversary is a frequent refrain: The Greatest Generation preserved America’s freedom. It is, however, an overstatement. The plain fact is that neither Germany nor Japan ever had the ability to conquer America.

By June 1944, both Axis powers had lost control of the sea, besides which they lacked the ships and manpower to occupy North America. (If Hitler was unable to invade Britain in 1940, how could he occupy America?) In fact, the Axis already was fatally overextended on the Eurasian landmass and in China.

Even today, orators continue overstating the threat to America’s freedom. While our security may be at risk in the war on terror, our freedom is as secure as We The People want it. Not even during the height (or depth) of the Cold War was American freedom at stake. The Soviet Union had the power to destroy us, but never could have enslaved us. Only Americans have the ability to deprive Americans of their freedom.

What, then, was America’s stake on Norman beaches?

The question answers itself. At stake was Western Civilization, and the freedom of most of Europe. France, Belgium, Holland, Denmark, Italy, Poland, Greece, Yugoslavia, Norway and other nations awaited liberation. In fact, so did Germany and its European allies: Bulgaria, Hungary and Romania. Sadly, many of them merely exchanged one oppressor for another: Nazism for Communism.

A subtle distinction, to be sure. The fact that the Fascists weren’t threatening our borders in many ways makes the sacrifices of that generation more remarkable. On the other hand, it was that fact that allowed us to delay entrance into the war, presumably at the cost of quite a few European lives. And, while the Communist enslavement of Eastern Europe doesn’t diminish the valor of the veterans of D-Day, it did lessen the victory.

Tillman and the NYT both make another point that we usually miss: the combat soldiers weren’t the only heroes. Tillman:

It was a war of logistics. Consequently, it was won at home, in the factories and farms. Among other things, America manufactured 79,000 landing craft; 297,000 airplanes; 2.5 million trucks; 12.8 million rifles; and 190 million pairs of boots and shoes.

Logistics also bore heavily upon manpower, as less than 25 percent of the Allied troops in France belonged to combat units. For every infantryman, tanker or artilleryman who crossed Omaha and Utah Beach, four or five other GIs backed him up: clerks, cooks, mechanics, truck drivers, doctors and nurses.

So when you think of the WWII vet, don’t allow your mental computer to default to the traditional image. He may have been your father, grandfather or the neighbor you hardly knew. But give him tribute, gentle reader, whether he used a bazooka, a bomber or a bulldozer.

We may find the heroics of D-Day stirring in the extreme. We may struggle to imagine the special hell of those beaches, the almost despairing lurch of the landing craft as they motored toward France. Those were brave times. But it was a bravery of shared sacrifice, a willingness to rise to an occasion that everyone prayed would never need to come again. This is a day to respect the memory of 60 years ago and, perhaps, to wonder what we might rise to if only we asked it of ourselves.

Indeed. Many have noted that one stark difference between WWII and the War on Terrorists is that, in the former, the entire citizenry was asked to make sacrifices. Nowadays, the burden rests almost entirely with volunteer soldiers and their families.

Update: Blackfive has an excellent roundup of D-Day reflections from around the blogosphere.