Twenty-five years after retiring as President Reagan's Budget Director, David Stockman is back with a scathing indictment of Republican fiscal policies over the past four decades. 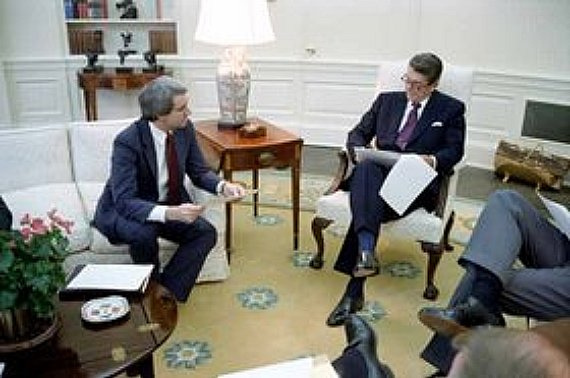 IF there were such a thing as Chapter 11 for politicians, the Republican push to extend the unaffordable Bush tax cuts would amount to a bankruptcy filing. The nation’s public debt — if honestly reckoned to include municipal bonds and the $7 trillion of new deficits baked into the cake through 2015 — will soon reach $18 trillion. That’s a Greece-scale 120 percent of gross domestic product, and fairly screams out for austerity and sacrifice. It is therefore unseemly for the Senate minority leader, Mitch McConnell, to insist that the nation’s wealthiest taxpayers be spared even a three-percentage-point rate increase.

More fundamentally, Mr. McConnell’s stand puts the lie to the Republican pretense that its new monetarist and supply-side doctrines are rooted in its traditional financial philosophy. Republicans used to believe that prosperity depended upon the regular balancing of accounts — in government, in international trade, on the ledgers of central banks and in the financial affairs of private households and businesses, too. But the new catechism, as practiced by Republican policymakers for decades now, has amounted to little more than money printing and deficit finance — vulgar Keynesianism robed in the ideological vestments of the prosperous classes.

Barry Ritholz summarizes the basic charges of Stockman’s indictment, although the entire article is definitely worth reading in full regardless of which side of the argument you’re on:

• The total US debt, including states and municipalities, will soon reach $18 trillion dollars. That is a Greece-like 120% of GDP.

• Supply Side tax cuts for the wealthy are based on “money printing and deficit finance — vulgar Keynesiansism robed in the ideological vestments of the prosperous classes.”

• Once fiscal conservatism was abandoned, it led to the serial financial bubbles and Wall Street depredations that have crippled our economy.

• The Nixon administration defaulted on American obligations under the 1944 Bretton Woods agreement.

• Who is to blame? Milton Friedman. In 1971, he persuaded President Nixon to unleash on the world paper dollars no longer redeemable in gold.

• According to Friedman, “The free market set currency exchange rates, he said, and trade deficits will self-correct.” What actually occurred was “impossible.” Stockman calls it “Friedman’s $8 trillion error.”

• Ideological tax-cutters are what killed the Republicans’ fiscal religion.

• America’s debt explosion has resulted from the Republican Party’s embrace, three decades ago, of the insidious Supply Side doctrine that deficits don’t matter if they result from tax cuts.

• The GOP controlled Congress from 1994 to 2006: Combine neocon warfare spending with entitlements, farm subsidies, education, water projects and you end up with a GOP welfare/warfare state driving the federal spending machine.

• It was Paul Volcker who crushed inflation and enabled a solid economic rebound — not the Reagan Supply Side Tax cuts.

• Republicans believed the “delusion that the economy will outgrow the deficit if plied with enough tax cuts.”

• The expansion of our financial sector has been vast and unproductive. Stockman blames (tho but not by name): 1) Greenspan, for flooding financial markets with freely printed money; and 2) Phil Gramm, for removing traditional restrictions on leverage and speculation.

• Trillion-dollar financial conglomerates are not free enterprises — they are wards of the state, living on virtually free money from the Fed’s discount window to cover their bad bets.

Now, Stockman is no stranger to being a bit of a gadfly in Republican circles. Less than a year after he had taken to the office, he was famously “taken to the woodshed” by President Reagan after being quoted in a long Atlantic article making comments critical of the very policies he was charged with implementing.  Stockman stayed in office until 1985 and largely disappeared from public life at that point, however he has resurfaced recently as a strong critic of the policies his party has implemented over the past decades:

“There are big questions about how good Dick’s view of foreign policy was,” Stockman tells me, “but his possible errors there are nothing compared to how far off base he was in economic policy. That is a clueless statement, and symptomatic of why I hold the Republican Party so responsible for the mess we’re in. The Republican Party is supposed to be the conservative party. The Democratic Party is supposed to be the irresponsible party. But somehow we lost that.”

Indeed, and I think it’s on that simple point — rather than on his critiques of Friedman’s monetarism which may or may not be historically correct — that Stockman is most right. At some point along the way, the GOP lost its way when it came to fiscal conservatism. If it ever actually had it.

Republicans came close during the Reagan era, but even Ronald Reagan was not strong enough to even try to take on the New Deal or the Great Society. For example, instead of eliminating the Department of Education, as he had promised during his Presidential campaign, Reagan ended up turning it into a bully pulpit and increasing the budget. Today, that Department is as secure in it’s existence as any other in the cabinet.

Then, when the GOP took control of Congress in 1994, and the White House in 2000, the desire to use the levers of power to create “compassionate conservatism” won our over any semblance of fiscal conservatism. Instead of tax cuts and spending cuts, we got tax cuts along with a trillion dollar entitlement program, a massive expansion of the Federal Government’s role in education, and two wars. That’s not fiscal conservatism it is, as others have said, fiscal insanity.

Stockman closes with what he foresees as our near-term economic future:

The day of national reckoning has arrived. We will not have a conventional business recovery now, but rather a long hangover of debt liquidation and downsizing — as suggested by last week’s news that the national economy grew at an anemic annual rate of 2.4 percent in the second quarter. Under these circumstances, it’s a pity that the modern Republican Party offers the American people an irrelevant platform of recycled Keynesianism when the old approach — balanced budgets, sound money and financial discipline — is needed more than ever.

As much as some might protest, it would appear that the Keynesian impulse in the GOP that started with Richard Nixon never really went away.

FILED UNDER: Economics and Business, US Politics, Republican Party