The nation's only competitive Governor's this year appears to be going in favor of the Democratic candidate.

With about a month to go until Election Day, a new poll shows that Democratic nominee Ralph Northam, who currently serves as Virginia’s Lt. Governor, appears to be expanding his lead over his Republican opponent Ed Gillespie:

A relatively unified party base gives Democrat Ralph Northam a clear lead over Republican Ed Gillespie heading into the final month of the Virginia governor’s race, according to a new Washington Post-Schar School poll.

Northam leads Gillespie by 53 percent to 40 percent among likely voters, with 4 percent supporting Libertarian Cliff Hyra. The advantage is similar to a Post-Schar School poll this spring but larger than in other public polls of likely voters released over the past month, most of which found Northam up by single digits.

But the race is still fluid, with a sizable number of likely voters — 1 in 4 — saying they could change their minds before Nov. 7.

“There’s a lack of intensity right now,” said Mark Rozell, dean of the Schar School of Policy and Government at George Mason University, which co-sponsored the survey. “Many fewer people than typically at this stage are paying close attention, and the candidates at this point have really not excited the electorate. . . . A lot can change in the next month. If I were the Northam campaign, I would not feel too comfortable right now.”

Gillespie could close the gap by consolidating support among Republicans, who historically have been more apt than Democrats to vote in low-turnout, off-year elections.

Confederate monuments and illegal immigration have played prominently during the campaign, but voters say they care more about health care, the economy and education.

While the governor’s race — the nation’s only competitive statewide contest this year — is seen nationally as an important test of electoral politics in the President Trump era, the average Virginian seems uninspired.

Fewer than 6 in 10 registered voters, 58 percent, say they are following the race closely — 10 percentage points lower than a similar point in the 2013 gubernatorial race.

Northam is the sitting lieutenant governor and a pediatric neurologist. Gillespie is a longtime GOP operative who led the Republican National Committee and nearly unseated U.S. Sen. Mark R. Warner (D) in 2014.

Trump and his actions in nearby Washington continue to distract and preoccupy Virginia voters. Roughly 6 in 10 Virginia likely voters disapprove of his performance as president, and more than 8 in 10 Trump detractors support Democrat Northam. But in a positive sign for Gillespie, just over half of all likely voters say Trump is not a factor in their choice. Some 17 percent of voters say they plan to vote to send a message of support for Trump, while 30 percent say they are voting to express disapproval.

Nearly 7 in 10 likely voters said they feel that Gillespie supports Trump, a perception that continues to hound his candidacy. While Trump is unpopular in Virginia — the only Southern state to vote for Hillary Clinton last fall — most Republican likely voters — 82 percent — approve of Trump’s job performance. Gillespie cannot afford to alienate them as he tries to woo independent and moderate voters turned off by the president.

“That creates a difficult tightrope act to perform,” Rozell said. Gillespie is “using some of these issues like immigration to drive the conservative vote, which he has not solidified, but he has to expand his support among groups of voters he’s not doing well with, particularly women [and] people in the D.C. suburbs and exurbs, where they’re not as conservative. How he pulls this off is his candidacy going forward.”

Northam has a few factors working in his favor at this stage, according to the survey of 1,121 adults, including 720 likely voters, conducted Sept. 28 through Oct. 2. Among likely voters, a near-unanimous 97 percent of Democrats support Northam, compared with 89 percent of Republicans who back Gillespie. Among independents, 47 percent back Northam, while 40 percent support Gillespie, a margin within the range of sampling error.

While Gillespie draws 51 percent of white likely voters compared with 41 percent for Northam and 4 percent for Hyra, the Democrat has a huge edge among African American likely voters — with 90 percent support — and nonwhites in general, at 80 percent.

Gillespie has a big edge in the rural, southwest portion of the state, with 53 percent to Northam’s 37 percent. But Northam has a comfortable margin in Hampton Roads and the Richmond area.

As the article notes above, Virginia is one of two states that have statewide elections for Governor this year. The other race is in New Jersey, where Democratic nominee Phil Murphy is facing off against Republican Lt. Governor Kim Guadagno. In that race, RealClearPolitics shows Murphy with an average 16.4 point lead over Guadango in a race that has been particularly one-sided. As a result, the race between Northam and Gilespie is getting nationwide attention as something of a test of the political waters in the year since Donald Trump was elected President. In that race, RealClearPolitics shows Northam (46.6%) with an average lead of 5.4 points over Gillespie (41.2%). It’s also worth noting that the thirteen point difference between the two candidates noted in this poll differs from most of the polling we’ve seen over the past two months, which has shown Northam’s lead to be closer to the 5.4 point average that RealClearPolitics notes. This may be in part because this poll appears not to include the Libertarian Party nominee among its choices. As a result, something would otherwise be very good news for Northam should be taken with a slight grain of salt absent future polls that show Northam growing his lead over his opponent. That being said, the chart of the race does show a growing gap between the two candidates that Gillespie will need to close if he’s going to have a chance of winning in November. 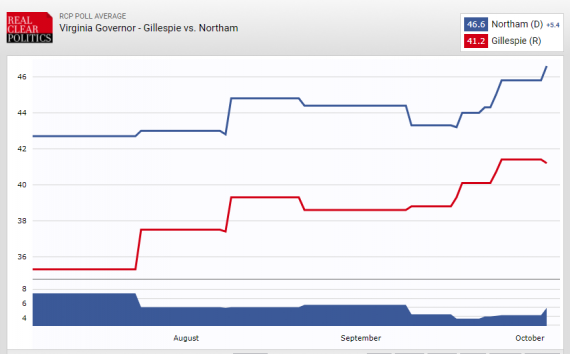 With a month left to go, it’s still possible for Gillespie to pull off a win here. The Post poll could prove to be an outlier and the actual state of the race could be as the RCP average would indicate. Closing a five-point gap with a month to go would be a much easier task than closing a larger gap or one that ends up being in the double digits as this poll indicates. If it is a closer race, then the outcome will likely come down to two factors. The first would be which candidate can do a better job of convincing the remaining undecided voters to support them. The second would be whether Gillespie specifically can do anything to get Republican voters behind him and motivated to vote. This poll isn’t the only one that appears to show that Democrats are far more united behind Northam than Republicans are behind Gillespie, which is perhaps a reflection of what turned out to be a particularly vicious primary battle between Gillespie and his principal opponent Corey Stewart, who was at one point chairman of Trump’s Presidential campaign in Virginia and who spent most of the primary running to Gillespie’s right.  In the end, Gillespie ended up winning the primary, but his margin of victory was less than 5,000 votes, or roughly 1.4% of the total votes cast. As a result, Gillespie’s campaign has been at times two-faced in that he has both tried to appeal to the more conservative Stewart supporters by adopting some of the themes and messaging that his opponent used in the primary while simultaneously attempting to appeal to the more moderate voters in areas such as Northern Virginia, the most populous part of the state and one which has proven to be decisive in previous statewide elections. The problem for Gillespie is that appealing to the voters to his right in the GOP is likely to turn off the moderates in Northern Virginia and elsewhere that he needs to overcome what appears to be Northam’s advantages in this race.

As I said, there’s still a month to go here and there’s a lot that can change. As things stand right now, though, it’s clear that Ralph Northam has the edge here and that Gillespie is going to have to work hard to reverse his momentum.