Polling is continuing to show a tightening in the race for the Democratic nomination, even though most Democrats continue to believe that Hillary Clinton will be their eventual nominee. 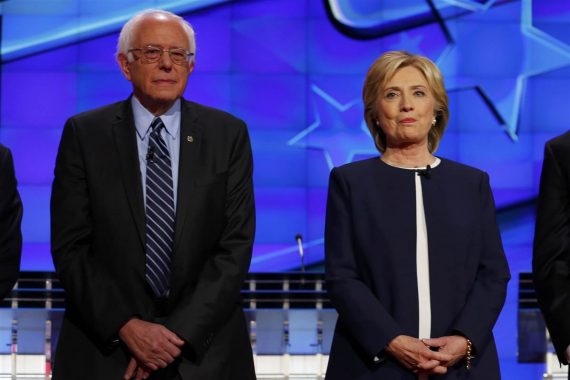 There are signs that the race for the Democratic nomination is continuing to tighten, but it’s still unclear whether this is a real threat to Hillary Clinton or simply an example of the natural tightening we often see in the weeks before voting actually begins, starting with a new national poll from CBS News and The New York Times which shows Vermont Senator Bernie Sanders closing the gap with Hillary Clinton:

As the first nominating contest approaches, Hillary Clinton’s commanding lead nationally in the Democratic primary has largely melted away, according to the latest New York Times/CBS News Poll.

The tightened race between Mrs. Clinton and Senator Bernie Sanders of Vermont is revealing a sharp generational divide within the Democratic Party, with primary voters under 45 favoring Mr. Sanders by a roughly 2-to-1 ratio.

Yet more than 7 in 10 Democratic voters — including most supporters of Mr. Sanders — still believe Mrs. Clinton will ultimately win the party’s nomination. Voters expressed deeper confidence in her ability to be an effective commander in chief and more of her supporters say their minds are made up compared with Mr. Sanders’s backers.

Over all, 48 percent of Democratic primary voters across the country support Mrs. Clinton, while 41 percent back Mr. Sanders, the poll found. Just a month ago, she led Mr. Sanders by 20 percentage points nationally.

Mr. Sanders’s shifting fortunes underscore the unsettled state of the presidential race in both parties with just three weeks before the Iowa caucuses. Previous contests have seen candidates rise and fall in the weeks before the first votes are cast, and national polls at this stage of the race are not necessarily predictive of the final outcome of the monthslong nominating battle. But Mr. Sanders’s surge has clearly unnerved the Clinton campaign, and she is responding aggressively.

“I like Bernie’s sincerity,” Dalton Paget, 27, an insurance agent from Spokane, Wash., said in a follow-up interview. “He’s talking about working towards policies that he’s been championing for a long time.”

In particular, Mr. Paget cited Mr. Sanders’s advocacy of overhauling the campaign finance system. “Honestly, before I heard much about Bernie Sanders and realized he had a decent chance for winning, I might have supported Hillary,” he said.

Mrs. Clinton is no longer treating Mr. Sanders as a distant rival who can be left unmentioned as she looks toward the general election. She is now confronting Mr. Sanders more forcefully, raising doubts about his electability and criticizing him as weak on the issue of gun violence.

In a rare issue on which she can challenge Mr. Sanders from the left, Mrs. Clinton has repeatedly sought to highlight his vote in 2005 for legislation that broadly shields gun manufacturers and dealers from liability lawsuits, portraying him as out of step with her and President Obama. And on Monday, she proposed a tax surcharge on people who earn more than $5 million per year, exploiting an issue that has energized Mr. Sanders’s supporters.

The tightening of the race on the Democratic side can be seen in the poll averages, where the momentum that Clinton had established late last year seems to have slowed significantly while Senator Sanders has seen his numbers rise. At the national level, for example, Clinton now holds an 8.6 point lead in the RealClearPolitics poll average thanks largely to the fact that the post-holiday polling has, so far, shown her lead over Senator Sanders shrinking significantly as time goes on. In Iowa, Clinton’s average lead is now less than one point, thanks in no small part to a new Qunnipiac poll that actually shows Sanders leading in the Hawkeye State by five points and a new ARG poll shows him leading by three points. This is the first time we’ve seen Sanders lead in the Hawkeye State since September when he briefly surged there before Clinton’s campaign seemed to turn around from its summer doldrums. In New Hampshire, Sanders has expanded his lead in the poll average to 6.2 points thanks largely to recent polls from Monmouth University, Fox News, and ARG showing the Vermont Senator momentum heading back upward in the Granite State.

What all this means is still wildly unclear. Political pundits, news reporters, and, for obvious reasons, Republicans, have begun to point to these new polls as evidence that Democratic voters are souring on Hillary Clinton as their eventual nominee, but it’s not at all clear that this is anywhere close to being true, at least at the moment. For one thing, even the polls that show Sanders leading or gaining strength in individual states show that the vast majority of Democratic voters still believe that Hillary Clinton will be their party’s eventual nominee. This includes Bernie Sanders supporters, which suggests that many of the people who are telling pollsters that they support Sanders recognize that their support is, in essence, a brief flirtation with a candidate whose message appears to them on an emotion level rather than a statement that they believe he is best qualified to be the party’s nominee in the fall. Additionally, Sanders doesn’t appear to have the same level of support or organization outside of Iowa and New Hampshire that one would expect he would need to take advantage of wins in either or both of those states going forward. Clinton continues to maintain a massive lead in South Carolina, for example, and appears to have a strong organization in Nevada, where such a factor will be quite important in helping voters navigate that state’s somewhat confusing caucus process. It’s also possible that Clinton’s campaign will be able to turn its fortunes in Iowa and/or New Hampshire in the next three weeks around and come out of either or both states with a win. If that happens, then this race would largely be over.

The bigger question for Clinton, of course, is what happens if Sanders momentum continues. In all honesty, Clinton could likely afford to lose either Iowa or New Hampshire and still go on to easily win the nomination in a short period of time. To a large degree, this is due to the fact that the structure of the race after New Hampshire, as well as the way that delegates to the convention will be allocated, tends to favor Clinton and her large, well-organized campaign operation, much of which is being managed by many of the same people who led President Obama’s campaigns in 2008 and 2012. While Sanders has been building up an organization as the months have gone on, by all accounts it is nowhere close to being as sophisticated as Clinton’s at this point, and the fact that Sanders has yet to find a way to appeal to important Democratic constituencies like African-Americans and Latinos suggests that the success he may see in Iowa and new Hampshire is not likely to be replicate elsewhere. Finally, in the end, it is clear that the majority of the Democratic Party powers that be are lined up behind Clinton, and the fact that many of these people will end up being “superdelegates” at the convention suggest that Clinton already has a built-in advantage that will be hard for Sanders to overcome.

Clinton would find herself in a more difficult position if she lost both Iowa and New Hampshire, of course. If this happened, it would likely revive talk about some other candidate entering the race ‘for the sake of the party,’ even though it’s already far too late for anything like that to realistically happen. At the very least, though, back to back losses like this would undermine the Clinton inevitability argument significantly, and would require Clinton to continue focusing on the primary battle with Sanders rather than the General Election. It would also arguably require her to shift further to the left on economic issues than the campaign might prefer in order to stave off the Sanders threat, something that could end up being a problem in the General Election depending upon how the race for the Republican nomination goes. In the end, it would still be likely that Clinton would eventually win the nomination even with twin losses in Iowa and New Hampshire, but it could make the future much rougher for her than she’d like it to be.