The testiest exchange during today's hearings in the Senate came when Jeff Sessions tried to confront Elena Kagan over military recruiting at Harvard Law School, and failed miserably. 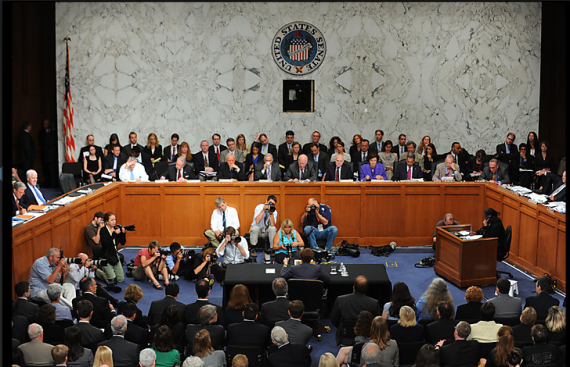 Alabama Senator Jeff Sessions spent much of his time during today’s Senate Judiciary Committee hearings going after Elena Kagan on the controversy over military recruitment at Harvard Law School while she was Dean:

Kagan’s actions regarding military recruiting at Harvard have for weeks loomed as Republicans’ leading point of criticism of her nomination, and Sen. Jeff Sessions (Ala.), the Judiciary Committee’s ranking Republican, wasted no time in homing in on the issue in the first morning of questioning at Kagan’s confirmation hearing.

In a stream of hard-edged questions, he accused Kagan of violating federal law and denigrating the military in deciding to bar recruiters from the law school’s career services office in late 2004 and early 2005.

“The actions you took helped created a climate not healthy to the military on campus,” Sessions said. “You were taking steps to treat them in a second-class way and not give them the same equal access because you deeply opposed their policy” on gays.

Kagan pushed back. She stood by her personal opposition to “don’t ask, don’t tell,” which she called “unwise and unjust.” She said she “respects and reveres” the military and that the only time she broke into tears during the stressful weeks following her nomination was when she read a May 21 op-ed piece in The Washington Post by a Marine captain vouching for her respectful dealings with the military.

And she said her overriding goal throughout the recruiting dispute had been to balance access for military recruiters to Harvard Law students with the university’s own policies barring discrimination by potential employers.

“We were trying to do two things, to make sure military recruiters had full access to students and protect our anti-discrimination policy,” she said. “We tried to do both of those things.”

It’s also worth noting that, after the Federal Government made clear that HLS would lose funding if it kept the ban in place, Kagan agreed to allow military recruiting through the Career Services Office:

In the Summer of 2005, the Pentagon alerted Kagan that that ”all possible funds” would be withheld if Harvard Law continued to ban recruiters from OCS.

“As a result, I have decided (again, after appropriate consultation) that we should lift our ban and except the military from our general non-discrimination policy,” Kagan wrote in a September 20, 2005 letter to the Harvard Law School community, “This will mean that the military will receive OCS assistance during the fall 2005 recruiting season….The Law School remains firmly committed to the principle of equal opportunity for all persons, without regard to sexual orientation. And I look forward to the time when all our students can pursue any career path they desire, including the path of devoting their professional lives to the defense of their country.”

In March 2006 the US Supreme Court ruled unanimously, 8-0, against FAIR

This was one of the few parts of today’s hearing that I was able to listen to in detail and, it seemed clear to me that Kagan handled Sessions’ questions very well. He obviously wasn’t pleased with her answers, but, as I anticipated back in May, it’s fairly obvious that nothing about this controversy arises to a level that would bar her fitness from serving on the Supreme Court and the argument that this is somehow evidence of an anti-military bias on her part is absurd, as James Joyner made plainly clear when he wrote about this story back in May.

This was clearly a swing and a miss by Jeff Sessions.