The United States is a very large and diverse country, its people have many differing views as you’d expect in such a country, and, not particularly surprisingly, some of those views are in diametric opposition. That’s particularly apparent in Americans’ views of how we should interact with Iran.

Isolationism remains a strong strain of thought in the United States and many if not most Americans are largely uninterested in what goes on in the next county let alone halfway across the world as long as it doesn’t affect their daily lives. These Americans would just as soon ignore the Iranian election as anything else. Another strain of isolationism sees dealing with Iran as the responsibility of international institutions: the United Nations, NATO, the IAEA, anybody as long as it doesn’t involve us. Make no mistake “let George do it” is as isolationistic as simply wishing it wouldn’t bother us.

For some Americans, pessimistic realists, the only way to deal with Iran is military force. So far those who favor attacking or invading Iran haven’t come up with an explanation of how they’ll achieve their objectives with anything short of an exterminatory strike or why such a course would be morally justifiable, what forces they’d use for an invasion of Iran, or that there’s political support for such a course of action.

In the blogosphere lately optimistic idealists have been stridently vocal in their support for the Iranian people’s aspirations for freedom. That presupposes that those in Iran who want a freer, more democratic Iran are representative of Iranians, generally, that if a fair reckoning of the vote had been made it would have resulted in a different outcome, that any likely outcome of the processes that are unfolding in Iran would result in a freer, more democratic Iran, and that how we or our government react can have any positive influence on how events develop in Iran.

President Obama has heretofore taken the position that we should negotiate with whomever is elected to the presidency in Iran and has responded warily to the demonstrators and whatever opposition movement they represent.

This morning Nader Mousavizadeh, consulting senior fellow at the International Institute for Strategic Studies, makes an interesting suggestion in an op-ed in the Washington Post, that we should engage Iran and ignore Ahmadinejad:

First, the administration should provide unequivocal recognition of Iran’s popular movement for greater freedoms and openness, and condemn the government’s crackdown. Whether an “Obama effect” has been at work in the streets of Tehran the past few days is not important; what matters is that after 30 years, the tired chant of “Death to America” has been replaced by “Death to the dictator.” A change is echoing down the capital’s boulevards that this U.S. president cannot fail to honor.

Second, the administration should interpret Ayatollah Ali Khamenei’s sanction of Ahmadinejad’s “victory” as confirmation — if any was needed — that the supreme leader is the power that matters in Iran, and, as such, is the person with whom a strategic dialogue should be established. Taking Ahmadinejad’s bait for another four years would be both counter-productive and unnecessary. Already, the Obama administration has explored ways to establish a line of communication with Khamenei. Through trusted intermediaries and imaginative diplomacy, opportunities for a direct dialogue with the supreme leader will present themselves. They must be seized.

The key elements of this negotiation are well known: persuading Iran not to weaponize its nuclear program and to urge its allies in Hamas and Hezbollah to pursue their aims through political and not military means. In return, Iran could look forward to acceptance of a legitimate role for itself in regional security and, over time, reintegration into the international community. It is as clear now as it was before last week’s voting that such a strategic dialogue, however challenging, is better served by starting with areas of common interest — such as Pakistan, Afghanistan and Iraq — as opposed to the nuclear dispute. If Iran’s true nuclear capabilities remain shrouded in mystery today, its people’s intentions regarding a future of greater freedoms and peaceful engagement with the world have never been clearer.

That’s a program that makes sense to me. To his “key elements” I’d add ensuring that Iran conforms fully to its obligations under the NPT and relevant UN resolutions on North Korea.

That might be interpreted as placing President Obama in something of a predicament but I don’t think that’s true. Pursuing different policies when circumstances change, as they clearly have been revealed to have done in Iran, isn’t a sign of weakness. It’s a sign of sanity. 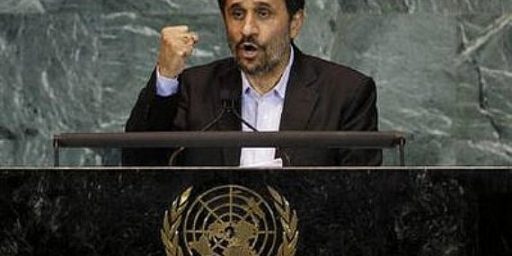