A Florida jury has convicted a man involved in an argument over a parking space of manslaughter, rejecting his attempt to invoke the state's 'stand your ground' law

A Florida man was convicted of manslaughter last week in a case that started out as a dispute over a handicapped spot and involved a test of the state’s controversial “stand your ground” self-defense law:

They had many reasons not to get their hopes up, family attorney Michele Rayner told The Washington Post. First, there were the 25 days it took to arrest the man who fatally shot 28-year-old McGlockton in a dispute over a handicap parking spot. There was the county sheriff who backed the shooter’s invocation of Florida’s controversial “stand your ground” law. There were parallels to the case of Trayvon Martin, the unarmed black teen whose shooter was acquitted in the same state after he claimed self-defense.

But on Friday there were sobs, sighs and hugs in the courtroom as Michael Drejka, 49, was convicted of manslaughter in a case that’s captured national attention. McGlockton’s girlfriend clapped her hands, the Tampa Bay Times reported, while others squeezed the shoulder of the slain man’s father.


National
A white Florida man cited ‘stand your ground’ for shooting a black man. A jury found him guilty.

Michael Drejka sits in court during a hearing at the Pinellas County Justice Center in Clearwater, Fla. in 2018. (Jim Damaske/Tampa Bay Times/Associated Press)
By Hannah Knowles
August 25
Late Friday night, a jury delivered the guilty verdict that Markeis McGlockton’s family never thought would come.
They had many reasons not to get their hopes up, family attorney Michele Rayner told The Washington Post. First, there were the 25 days it took to arrest the man who fatally shot 28-year-old McGlockton in a dispute over a handicap parking spot. There was the county sheriff who backed the shooter’s invocation of Florida’s controversial “stand your ground” law. There were parallels to the case of Trayvon Martin, the unarmed black teen whose shooter was acquitted in the same state after he claimed self-defense.
But on Friday there were sobs, sighs and hugs in the courtroom as Michael Drejka, 49, was convicted of manslaughter in a case that’s captured national attention. McGlockton’s girlfriend clapped her hands, the Tampa Bay Times reported, while others squeezed the shoulder of the slain man’s father.

Drejka’s lawyers argued the Florida man acted reasonably in self-defense last year after McGlockton pushed him to the ground in the parking lot outside a Clearwater, Fla., convenience store. Prosecutors, however, pointed to video footage showing McGlockton backing away before Drejka shot him. He would collapse before his 5-year-old son.
Jurors rejected Drejka’s defense.

Drejka “took the life of another human being without any legal justification,” Pinellas-Pasco Assistant State Attorney Fred Schaub said at the trial.

Schaub delivered passionate closing arguments, the Tampa Bay Times reported, walking the courtroom and at times throwing up his hands.

“He was a human being in our world,” he said of McGlockton. “What have we come to in this country?”

Drejka’s lawyers, who plan to appeal the verdict after an Oct. 10 sentencing, maintain that their client thought he was at risk, saying he didn’t see McGlockton’s backing away as removing the threat in the three seconds between pulling his gun and firing.

“He had really no time to assess the danger,” defense attorney Bryant Camareno told The Post.

Like Trayvon Martin, McGlockton was black and shot by a man who said he felt threatened. The judge in the case wrote that he did not consider race a factor in the killing, defense lawyers said. But Rayner framed McGlockton’s death as one of many unjustified killings of black men, mentioning not just Martin but also Michael Brown and Eric Garner.

She said McGlockton’s family was pained by the defense’s attacks on the victim’s character throughout the trial, saying that Drejka’s attorneys used racist tropes when they called McGlockton violent and badly parented. Defense lawyer John Trevena told The Post the accusations of racism are “absolutely absurd.”

“Obviously while you are hopeful the jury will get it right, there is a real concern that this is a another case where the jury won’t convict and will say that this life — Markeis’s life, as a black person — did not matter,” Rayner said.

The confrontation that led to last week’s verdict is fairly straight forward. On the afternoon of July 19th, 2018, McGlockton, who was traveling with his five-year-old son and girlfriend and her children when the group stopped at a local convenience store. McGlockton had pulled into a handicapped spot and went inside with his son while his girlfriend and her children remained in the car. While McGlockton was inside, Drejka approached the car and started arguing with the girlfriend about the fact that the car was in the handicapped spot despite not having a handicapped parking permit.

Drejka and his attorneys argued that he shot McGlockton because he feared his life was in danger or that he would suffer great bodily injury if he didn’t stop McGlockton. This meant that the jury had to decide if Drejka had a reasonable fear of death or bodily harm, which would make the killing justifiable under Florida law, despite the fact that the video showed McGlockton backing away from Drejka after knocking him to the ground. Based on the verdict the jury obviously did not believe that Drejka had such a reasonable belief.

The issue of “Stand Your Ground” laws in general, and Florida’s law in particular, became the focus of national attention four years ago during the aftermath of the incident in which George Zimmerman shot and killed Trayvon Martin after the two got into a confrontation in Zimmerman’s neighborhood during a fateful night in February 2012. While the Zimmerman case was not, strictly speaking, a “Stand Your Ground” case, and that Zimmerman had ultimately waived his right to a pre-trial hearing that could have resulted in his acquittal, the case brought the issue of these somewhat controversial laws, and the question of the acceptable limits of self-defense in general and the Florida law in particular. Ultimately, of course, Zimmerman was acquitted of the charges against him, although, again, it’s worth noting that Florida’s “Stand Your Ground” law was not the basis for this acquittal.

Under Florida’s law, in particular, a person who has a reasonable belief that they are in grave danger does not have a legal obligation to retreat from a confrontation even if that can do so safely. Instead, they have a right to stand their ground and defend themselves with deadly force if that becomes necessary. In the years since the state legislature amended the law to provide further protection to those who use force. These changes put the burden of proof on prosecutors to establish that the law does not protect the defendant rather than giving the defense the burden of having to establish that it does. Obviously, this makes a prosecutors job in these types of cases more difficult, but it doesn’t necessarily make it impossible.

With respect to the facts of this case, there are two items that stand out here that argue strongly against the applicability of the “Stand Your Ground” law.

First, this entire confrontation was started by Mr. Drejka, who was apparently upset by the fact that McGlockton had parked his car in the spot reserved for handicapped persons. While McGlockton was in the store, Drejka apparently engaged an in a loud an unruly rant directed at McGlockton’s girlfriend, who was in the car by herself with two small children. McGlockton sees this when he leaves the store with his son and, not unreasonably, assumes that his girlfriend and the other children are in some kind of danger from a man who was ranting and screaming at them. He responds by confronting Drejka and knocking him to the ground. It was at this point that Drejka pulls his gun. The video surveillance clearly shows McGlockton backing away from Drejka at that point but Drejka ends up pulling the trigger anyway and firing, shooting McGlockton in the chest and killing him. While I’ll admit to not being an expert in Florida law, the fact that McGlockton was backing away before Drejka fired strikes me as being significant in that it tends to undercut the idea that Drejka had a reasonable belief at the time that his life was in danger notwithstanding the fact that he was on the ground. Apparently, the jury in this case agreed.

No doubt, the defense will appeal this case but absent some evidence of clear error, it seems fairly clear that the jury verdict will most likely stand. 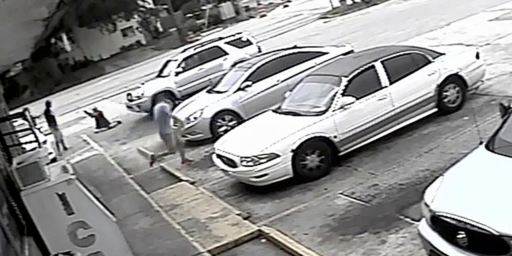