Giuliani Confirms That Trump Fired Comey Because Of The Russia Investigation

In addition to his admissions about the Stormy Daniels matter, Rudy Giuliani also confirmed what we've known for awhile, that James Comey was fired because of the Russia investigation. 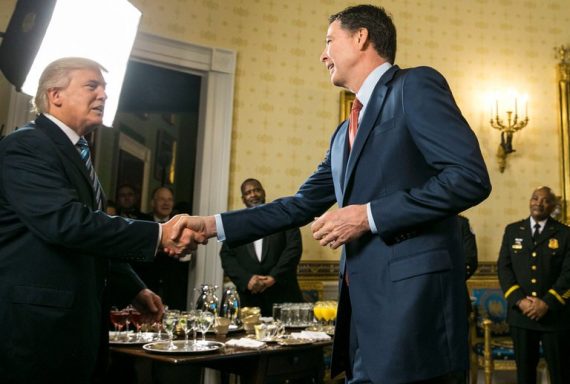 In addition to contradicting past statements by President Trump and the White House regarding the payment to Stormy Daniels, Rudy Giuliani’s appearance last night on Sean Hannity’s Fox News Channel show was also notable because it appears to confirm that President Trump fired F.B.I. Director James Comey due to the Russia investigation:

“He fired Comey because Comey would not, among other things, say that he wasn’t a target of the investigation,” the former New York City mayor, who recently joined Trump’s legal team, told Fox News’s Sean Hannity. “He’s entitled to that. Hillary Clinton got that and he couldn’t get that. So he fired him and he said, ‘I’m free of this guy.'”

Comey had previously said that he told Trump that he wasn’t the focus of an investigation but that the president pressed him to make a public statement. The former FBI director said he never made a public statement for several reasons, including the possibility that Trump’s actions would eventually come under review by the FBI.

“He fired Comey because Comey would not, among other things, say that he wasn’t a target of the investigation,” Giuliani, who recently joined Trump’s legal team, told Fox News’s Sean Hannity.

“He’s entitled to that. Hillary Clinton got that and he couldn’t get that,” Giuliani said. “So he fired him and he said, ‘I’m free of this guy.’ “

Here’s the video of Giuliani’s statement on the Comey firing:

Giuliani on Trump being interview by Mueller: “Are they objective? A lot of things point in the direction that they think James Comey is telling the truth and not the president.”

Argues Trump was justified in firing Comey because he wouldn’t say Trump wasn’t a target. pic.twitter.com/YzCb8l9ggh

The roots of Trump’s decision to fire James Comey go back to well before the event happened just under a year ago today. Back in February 2017 when he asked Comey if he could end the investigation of former Trump National Security Adviser Michael Flynn in a conversation that took place just days after Trump had fired Flynn because he lied to Trump campaign officials and to Vice-President Pence over the nature of his contacts with the Russian Ambassador to the United States. Things kicked into high gear just under a year ago from today when the President fired Comey abruptly just days after Comey had testified about the investigation into Russia and the Trump campaign before a Senate committee. At the time Comey was fired, the Administration took the position that he was being fired due to his mishandling of the investigation of former Secretary of State Hillary Clinton’s use of a private email server and her handling of email investigation. They even released a long memorandum that had been prepared by Deputy Attorney General Rod Rosenstein that sought to justify the President’s action on that basis. Very quickly, though, it became apparent that there were other motives involved in the decision to fire Comey that had nothing to do with the Clinton investigation. As the days went on, though, it became more and more apparent that Comey was been fired because of the President’s frustration with the Russia investigation, something that Trump himself seemed to confirm. Trump topped off this revelation by appearing to threaten Comey with ‘tapes’ of conversations between the two men. Later, we learned that Trump had told the Russian Ambassador to the United States and the Russian Foreign Minister that he had fired Comey because of the Russia investigation just days after Comey’s dismissal. Finally, by the end of the week that had begun with Comey’s firing last year, Trump admitted that to Lester Holt of NBC News that he had fired Comey because of the Russia investigation. More recently, though, Trump seemed to contradict himself when he said that Comey wasn’t fired because of the Russia investigation, although he didn’t offer any other explanation for why he abruptly dismissed the Director of the F.B.I.

What Giuliani said last night doesn’t so much contradict what Russia said a year ago about why he fired Comey so much as it presents it in a different light. Effectively Giuliani is saying that, yes, Comey was fired because of the Russia investigation, and he added to that the fact that at least part of the reason for that is because he apparently declined to make a public statement that Trump was not a target of the investigation. This is an interesting revelation in no small part due to the fact that it was just about a month ago that Robert Mueller reportedly told Trump’s legal team that the President was a “subject” of the Russia investigation but was not a “target” at that point in time. As I explained at the time, and as former Federal prosecutor Ken White explained further in his own blog post, this isn’t as significant a distinction as it might seem to a lay person since a person is not considered a “target” of an investigation until such a time as the prosecutor is on the verge of seeking an indictment. In that respect, saying that the President isn’t a target of an investigation doesn’t mean very much, especially since existing legal interpretation from the Justice Department states that a sitting President cannot be indicted until they have either been impeached and removed from office or they have left office, whether it be because of resignation or being defeated in an election. In this respect, Giuliani’s statement is less than meets the eye and, in the end, it seems to confirm yet again that Comey was fired because of the Russia investigation and that it was merely the first step in Trump’s year-long efforts to undermine the Russia investigation. This obviously opens the President up to questions regarding obstruction of justice.

Once again, Giuliani did nothing to help his client here, and a heck of a lot to hurt him.