The Western media are continuing to react in stunned disbelief to the results of the Iranian election:

TEHRAN, June 13 (Reuters) – Iranian President Mahmoud Ahmadinejad said on Saturday an election in which he secured another four-year term was “free and healthy”, rejecting allegations of irregularities by a moderate rival in the vote.

“People voted for my policies,” the conservative president said in a televised address a day after the disputed election, in his first post-election comment.

“It was a free and healthy election,” he said, without making direct reference to assertions by former Prime Minister Mirhossein Mousavi that there were many violations in the vote.

As he was speaking, supporters of Mousavi clashed with police in various places in Tehran, chanting anti-Ahmadinejad slogans, witnesses said.

“Everybody should respect people’s vote … we need a calm atmosphere to build the country,” Ahmadinejad said.

Some Westerners are producing charts and graphs and claiming that the election can’t possibly have been legitimate. Not so says Nate Silver:

…there was more wave-to-wave variation in the Ahmadinejad-Moosavi results than the statistical analysis I cited above seems to imply. Ignoring votes for minor candidates, Ahmadinejad won a high of 70.4 percent of the votes in Wave 1, and a low of 62.3 percent in the votes newly added in Wave 6. By comparison, Obama’s share of the newly-added votes in our experiment ranged from 56.4 percent in Wave 3 to 44.7 percent in Wave 4. That’s slightly more variance than we saw in the Iranian results but not much.

To be clear, these results certainly do not prove that Iran’s election was clean. I have no particular reason to believe the results reported by the Interior Ministry. But I also don’t have any particular reason to disbelieve them, at least based on the statistical evidence. If Moosavi truly did have the support of a majority of Iran’s citizenry, the best evidence we will have of that is what happens in the streets of Tehran over the next days and weeks.

That was my reaction yesterday to the graph and why I didn’t comment on it. As the vote count rises, so do the totals of the candidates. So what? It proves nothing unless you’re taking that the vote was rigged as an assumption.

Gordon Robison has an excellent backgrounder on the Iranian electoral system and an analysis of the election which you might want to read in full. He proposes three alternative explanations for the outcome of the election:

As I suggested yesterday the greatest casualty of this election isn’t Iranian democracy but the narrative being promulgated by the Western media that some sort of liberalizing reform was possible in Iran via the democratic process. The affirmation procedure that Iran’s elections embody isn’t worthy of the name “democracy”. The narrative could only have been produced by a combination of wishful thinking, argument from consequences, and Western journalists restricting their interviews to anybody they found in the bar of the Hilton (or the present day Iranian equivalent). And as many are saying today, Tehran is not Iran.

The protests and violent clashes in Iran that are being reported between those who are outraged over the election and the authorities will be put down. The Iranian authorities will use whatever level of force is necessary to do that. God is on their side.

Frankly, I doubt that we’ll see genuine reform in Iran until the revolutionary generation has faded from the scene, thirty or so years hence. Their successors won’t have the old revolutionary fervor.

I do think that this outcome places the Obama Administration in something of a pickle. There is little doubt in my mind that reelected President Ahmadinejad will intensity his rhetoric and be prepared to demand more concessions to come to the bargaining table. It takes two to negotiate. Do the Iranians think they need to? 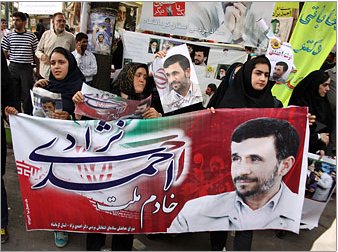