It's not clear if Congresswoman Liz Cheney wants to run for the open Senate seat in Wyoming. If she did, though, she'd be the prohibitive favorite.

Liz Cheney, the daughter of the former Vice-President, has not said whether or not she’s running for the open Senate seat created by the impending retirement of Senator Mike Enzi. However, if she did, she’d be the prohibitive favorite in the Republican primary:

Rep. Liz Cheney (R) leads a field of declared and potential GOP Senate contenders by 20 points in the race to replace retiring Sen. Mike Enzi (R) in Wyoming, according to a new poll from Montana State University Billings.

The House Republican Conference Chairwoman, who has not yet said whether she will run for Senate, garnered 37 percent support in the survey, compared to 17 percent support for second-placed former Rep. Cynthia Lummis (R-Wyo.), who has already filed to run for the Senate seat.

Others were polling in single digits, including GOP mega-donor Foster Friess, who is also weighing a bid. Thirty-eight percent of those polled said they remain undecided.

Speculation has grown over whether Cheney, the No. 3 Republican in the House, will enter the open Senate race or look to continue to climb in the leadership ranks in the lower chamber.

Under the rules of the House Republican Conference, Cheney — the daughter of former Vice President Dick Cheney — would have to vacate her leadership position after formally declaring herself a candidate for Senate.

Were she to enter the Senate race, she would face Lummis, a former member of the House Freedom Caucus who has received strong support from the conservative flank of the Republican Party.

“Liz is a rising star in the Republican Party and regardless of where she is after 2020, she’s going to be a trailblazing force for conservatives moving forward,” one GOP operative said.

“There’s no wrong decision for her, and this poll just reaffirms that she’s an overwhelming front-runner if she opts to launch a Senate campaign.”

One leadership source told The Hill there has been talk of changing the rules to allow the two-term Wyoming Republican to remain on as conference chairwoman while seeking a seat in the upper chamber.

Cheney’s political intentions have been the subject of speculation ever since Senator Mike Enzi announced in May that he would not be running for re-election. With the Cheney name, there seemed to be little doubt that, were she to choose to run for the Senate she would be a strong favorite. Indeed, one poll taken soon after Enzi’s announcement gave Cheney a strong lead over Cynthia Lumis, her predecessor as the At-Large Representative from Wyoming who announced her intention to run for the Senate back in July. The margin in this poll is largely consistent with that previous result.

In the time since then, Cheney has been courted both by the Senate GOP, who see her as a strong candidate to run in a state virtually guaranteed to go Republican next year, and by the House GOP, where she derives her importance both due to the fact that she is the highest-ranking woman in the GOP Caucus where she has risen rapidly to the No.3 position behind Minority Leader Kevin McCarthy and Minority Whip Steve Scalise and there is speculation she herself could one day end up being the leader of the Republican Party in the House.

If Cheney did decide to run for the Senate, she would already have the experience of two statewide runs for office under her belt since she serves as the state’s sole member of the House of Representatives. She first won that seat in 2016, beating a crowded field for the Republican nomination to succeed Cynthia Lummis, who had held the seat since 2008. In the 2016 General Election, Cheney easily won the seat, beating her Democratic opponent by more than 30 percentage points (roughly 75,000 votes). In 2018, Cheney was unchallenged in the primary and won the General Election by a margin similar to her win in 2016. Add to this the fact that the Cheney family is well-known and well-regarding in Wyoming and you have a situation where Cheney is, it seems, relatively free to decide whether to run for her House seat again, a race she’d win easily, or make a bid for the Senate where her biggest challenge would be winning the Republican nomination.

As noted in the article quoted above, it will likely be some time before Cheney makes her intentions known, in no small part because her position in Wyoming politics means that she can wait to make a decision. More likely than not, though, she’ll likely make a decision by the end of the year. 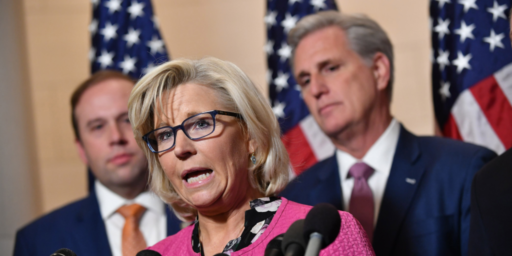 Liz Cheney Being Courted By House And Senate GOP