The political party formed by French President Emmanuel Macron just about a year ago scored big wins in yesterday's first round of legislative elections. 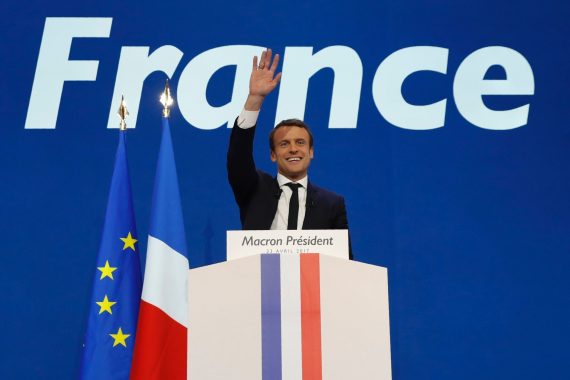 Just over a month after decisively defeating Marine Le Pen in the second round of the French Presidential election, French President Emmanuel Macron managed to put together a slate of candidates that scored overwhelming wins in the first round of legislative elections that seem to guarantee that Macron will be able to enact most of his agenda:

PARIS — French President Emmanuel Macron and his party took a commanding lead in the first round of France’s legislative elections Sunday, with the potential to win an absolute majority.

In a once-unimaginable scenario, Macron’s centrist party — established little more than a year ago — was projected to win between 390 and 430 of the French Parliament’s 577 seats, according to an Ipsos-Sopra analysis. In a political landscape defined for decades by the well-oiled machines of traditional center-left and center-right parties, the rise of Macron’s Republic on the Move represented a watershed development.

The victory of Macron in May’s presidential election was the first time a president who did not belong to either of those traditional parties won the Elysee Palace. If Sunday’s parliamentary results hold up after a second and final round of voting next Sunday, France will be run by both a new president and a new party. Macron, who has long promised a “renewal of political life,” will have successfully persuaded voters to give him relatively free rein in the attempt.

But turnout was at a record low level, and that could cloud Macron’s mandate. Only 49 percent of registered voters cast their ballots, according to the Ipsos-Sopra analysis. Participation in parliamentary elections has typically been significantly higher, mostly between 60 and 80 percent.

Macron’s political opponents were quick to emphasize the unusually high abstention figures.”I am particularly concerned about the fact that 1 French person out of 2 did not vote,” Valérie Pécresse, the president of the ­center-right Republicans party in the Ile-de-France region, told Le Monde newspaper. “We weaken Parliament, which is a democratic counter-power. And we take the risk of a single party, a single thought, a single program.”

“I am particularly concerned about the fact that 1 French person out of 2 did not vote,” Valérie Pécresse, the president of the ­center-right Republicans party in the Ile-de-France region, told Le Monde newspaper. “We weaken Parliament, which is a democratic counter-power. And we take the risk of a single party, a single thought, a single program.”

The Republicans, one of the two parties that controlled France until 2017, came in second, winning between 85 and 125 seats, according to early projections. But the Socialists, once a bedrock of French and European political life, were projected to win only between 20 and 35 seats. For the historic party of François Mitterrand, that would probably mean a devastating loss of more than 200 seats.

“The tornado was too strong, the two votes too close,” Jean-Christophe Cambadélis, the first secretary of the French Socialist party, said in a statement Sunday night. The “tornado” he referred to was that of Macron’s victory in the general election, in which some Socialist ministers abandoned their own party and supported instead the newfound party of the outsider candidate, himself a onetime Socialist minister.

When Macron won the French presidency last month in a landslide, it did not necessarily follow that the new leader — the youngest in modern French history, who has promised a slew of broad, sweeping reforms, many in the notoriously difficult labor sector — would carry any kind of lead in the two rounds of legislative elections now underway.

In other news, the National Front Party, led by Marine Le Pen, once again fell far short of success and is looking at small representation in the legislature:

PARIS — France’s far-right National Front is projected to win no more than five seats in the lower house of parliament, polls showed after the first round of voting on Sunday, failing to capitalise again on widespread frustration at mainstream parties.

It was the second setback for the anti-establishment party in barely a month after its leader Marine Le Pen reached the presidential run-off vote only to be soundly beaten by Emmanuel Macron and his bid to renew French politics from the centre.

Her defeat in May brought huge relief to European allies who had feared another populist upheaval to follow Britain’s Brexit vote and Donald Trump’s election as U.S. president, and disappointment to the party faithful.

They then set their sights on winning enough parliamentary seats to form a parliamentary group and with it more voice in the chamber. Fifteen are required, but that too now looks very unlikely.

With most first round votes counted, the National Front was on course to win about 13.5 percent of votes.

That would barely be above the party’s score in the legislative elections five years ago and far behind its performances in regional, European and presidential ballots over the past three years.

Worse still, projections showed it possibly winning as few as just one seat in the 577-seat chamber in next week’s second round.

Le Pen, herself in a commanding position to be elected to the national parliament for the first time after winning 46 percent of first round votes, put on a brave face, urging voters not to abstain next week.

“A strong mobilisation (on June 18) could allow us to win several constituencies,” she said. “Patriotic voters must … turn out en masse to polling stations next Sunday.”

Other senior Front officials, including her deputy Florian Philippot and secretary general Nicolas Bay, admitted to being “disappointed”.

No parliamentary group means little speaking time in the lower house and next to zero chance of chairing a committee.

Jean-Yves Camus, a researcher who specialises in the far-right, said turnout at parliamentary elections among the party’s core working class support base was traditionally low and an obstacle the party had once again failed to surmount.

“Working class voters vote less in parliamentary elections than in presidential ones,” he said. “There is also the fact that a majority for Macron’s party seemed a foregone conclusion and people are just tired of an election campaign that has been going on for months.”

Despite the poor performance, Le Pen’s control over the party remained too strong for any challenge to her leadership in the near future, he said, especially after her niece Marion Marechal-Le Pen stepped away from politics.

The fact that Macron has been able to pull together a centrist political party in less than a year and manage to win not just a Presidential election but also what appears to be sufficient power in the legislature to control the agenda going forward is actually quite impressive. First and foremost, of course, there’s the point that he was able to essentially go over the heads of France’s major established political parties seems to suggest the fact that the French public has become disillusioned with politics as usual, much like recent election results in the United States and the United Kingdom, seems to indicate that voters there are as frustrated with the status quo as voters in other parts of the world. At the same time, though, Macron managed to do this without appealing to the extreme left or the extreme right, but rather by pushing to forge a centrist movement built around the idea of actually getting things done. He’s also managed to accomplish this feat without provoking the kind of seeming instability in the political system that we’re presently seeing in the United States and If he succeeds in that regard, he will likely become one of the strongest leaders in Europe along with German Chancellor Angela Merkel, with whom he quickly seems to have developed a strong working relationship in the light of the instability that both Brexit and Donald Trump have created in Europe.

An additional encouraging sign from yesterday’s legislative election is the continued failure of the National Front to capture any success at the ballot box, something that has happened to far-right parties across Europe in other elections this year in nations such as The Netherlands and Austria. In the light of the terror attacks that have rocked France, Belgium, and the United Kingdom since 2014 and the streams of refugees from civil war in Syria and instability in Northern Africa, there had been some fear that we’d see voters flock to political parties that held anti-immigrant and anti-Muslim viewpoints. Outside of a few isolated examples, that has not been the case, and the success of Macron’s centrist politics in France suggests that the anti-immigrant zeal that many feared from the increase in terror attacks will not materialize.

Going forward, of course, much will depend on Macron’s ability to solve some of France’s long-term problems such as a persistently high unemployment rate, especially among the young. To a large degree, it was the state of the economy that appears to have been the undoing of former President Francois Hollande and the same thing could happen to Macron if he is unable to fix the problems facing France’s economy. For the time being, though, it looks as though he’ll have plenty of political power to enact his agenda, so at least he’ll have the chance to make the changes the voters seemed to support by bcacking him in last month’s election.