For the ninth time since 1974, the next Governor of Maine will likely be elected with less than 50% of the vote. 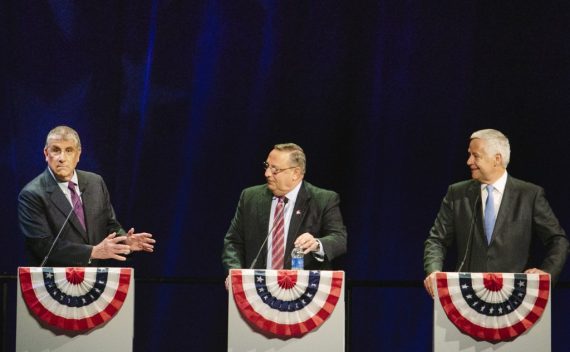 The Washington Post’s Sebastian Payne notes that, in all likelihood, the person who wins the Maine Governor’s election in November will be someone who most of the voters have voted against:

PORTLAND, Maine — Gov. Paul LePage (R) claims to hate all politicians, but Eliot Cutler seems to be an exception. During the first gubernatorial debate last week, the incumbent governor of Maine treated his opponent like a frat brother — patting him on the back, punching him playfully, and high-fiving him.

The embattled governor, suffering from self-inflicted wounds and sagging approval ratings, has a good reason to show his rival a little love: if LePage holds on to his job, Cutler may well be the reason why.

With less than three weeks left, this year’s gubernatorial race in Maine is still an unpredictable — and unconventional — contest. LePage is hoping his core voter support is enough to win him a second term, making him perhaps the first governor in U.S. history to win two terms with less than 40 percent of the vote each time.

For Maine Democrats, the scenario is all too familiar. Four years ago, in another crowded gubernatorial race, Cutler pulled support from their party’s candidate. The independent came just 9,000 votes short of the governor’s mansion. The Democratic candidate came in third.

Any incumbent with that level of September support is usually a sure loser. But the governor’s opponents are, in some ways, his greatest asset: just as in 2010, Cutler and the Democrat in the race are likely to split the considerable anti-LePage vote, which could well give the unpopular incumbent a solid shot at victory — one that would likely come with far less than a majority.

If Cutler weren’t in the race, the fall terrain would be far friendlier for Michaud: when participants in the Portland Press Herald poll were asked which candidate they would back in a contest between the two major party candidates alone, Michaud held a 50 to 44 percent edge over LePage. Seventy-one percent of the voters who backed Cutler in 2010 have a favorable view of Michaud, while 77 percent are unfavorable toward LePage.

The New York Times’ Katherine Seeyle has her own profile of the race in Maine in her paper, repeating the theme that Governor LePage’s best hope for survival is keeping the three-way race alive:

WATERVILLE, Me. — In a state with a long tradition of electing moderates and independents, Gov. Paul R. LePage, a fierce partisan, is definitely a departure.

With Tea Party backing, he burst onto the scene in 2010 breathing anti-welfare fire, bludgeoning Democrats and bristling with unapologetic comments that bordered on the profane.

A former millworker with a back story out of Dickens — the oldest of 18 children of an abusive, alcoholic father, he ran away from home at 11 — Mr. LePage, 66, has earned his share of admirers.

A majority of voters, however, did not want him as governor in the first place. Yet he could win another term in November — again without a majority.

In 2010, Mr. LePage, a Republican, squeaked into office with 38 percent of the vote against two major candidates. Now, after four turbulent years, polls show him at about that same level as he again faces two challengers who have divided the forces against him.

But his task this year appears harder.

His Democratic opponent, Representative Michael H. Michaud, 59, a six-term congressman and former president of the State Senate, is much better positioned than the Democratic nominee in 2010.

Mr. Michaud (whose name has been pronounced as both MeSHOW and MeSHOO; he has no preference) enjoys the support of national Democrats, unions and environmentalists. (President Obama, still more popular than unpopular among Democrats here, is stumping for him this month.) Mr. Michaud is a former millworker as well, but unlike the governor, he did not attend college. If elected, he would become the country’s first governor who is openly gay.

Working in Mr. LePage’s favor again this year is the presence of a third candidate, Eliot Cutler, an independent. Mr. Cutler, 68, a wealthy lawyer and businessman, ran against Mr. LePage in 2010 and nearly beat him, with 36 percent of the vote. This time, Mr. Cutler trails in third place — partly because of Democratic resolve to unite behind Mr. Michaud — but he still diffuses the anti-LePage vote.

The higher Mr. Cutler climbs in the polls, analysts say, the more likely he is to siphon votes from Mr. Michaud and hand the election to Mr. LePage. If Mr. Cutler were not in the race, the University of New Hampshire poll showed, Mr. Michaud would lead Mr. LePage 50 percent to 44 percent.

As Seeyle goes on to note, this simple electoral fact has had some rather interesting impacts on the race as a whole, most especially as manifested in the debates that the three candidates have held so far in the race. To a large degree, it appears as though LePage and Cutler have both used the majority of their time to attack Michaud and his positions and have largely laid off of attacking each other. One report even described the relationship between the two in pre-debate banter last week as friendly and even “buddy-buddy.” Given the fact that just four years ago it was Cutler who came within 10,000 votes of beating LePage in a race that included not only a Democratic nominee but two other Independent candidates, this seems somewhat surprising. However, it seems entirely understandable given the nature of the race. For LePage, beating Michaud at the moment seems to require that Cutler remain a strong enough candidate all the way through Election Day to peel sufficient votes away from the Democratic nominee. For Cutler, any hope he has of moving out of third place in this race and once again becoming the contender that he was in 2010 requires peeling more and more votes away from the Democratic nominee. In such an environment, it’s entirely natural that the former 2010 rivals would be, at least informally, teaming up to go after what each campaign sees to be their primary adversary.

While all of this is unusual for Americans in most states, it is by no means unusual in Maine. In the ten elections for Governor in that state that have been held in the last 40 years, a candidate has been elected with a majority of the vote only twice; in Democratic incumbent Governor Joseph Brennan’s 1982 bid for re-election when he got just under 62% of the vote, and in 1998 when Independent Governor Angus King won re-election with just over 58% of vote. In the other eight elections since 1974, there has been at least one Independent candidate for Governor who put up a strong enough showing to keep the winning candidate below 50%, in fact only three of those eight — the 1978 election, the 1990 election, and the 2002 election — were ones in which the winning candidate got above 40% of the vote. In each of the remaining elections, the winner received less than 40% of the vote, with winning percentages ranging from as high as 39.90% in 1986 to 35.37% in 1994 when Angus King was first elected. For his part, LePage was elected in 2010 with 37.6%. In other words, 80% of the Governor’s races have been three-way affairs where the winning candidate received less than a majority, and 50% of them have been races where the winner received less than 40% of the vote. To a large degree, this is due to peculiarities of the politics of Maine, particularly a strong independent and Green Party movement, but whatever the reasons it is entirely normal as far as Maine is concerned.

On some level, I suppose, one could object to the idea that someone could be elected to a position like Governor with less than a majority of the votes, and there are certainly ways to prevent this from happening. Some states deal with the issue by making it incredibly difficult, if not virtually impossible, for viable third-party and independent candidates to get on the ballot and into debates, but those draconian methods have always struck me as improper and distasteful since they essentially involve the two major parties colluding to keep potential competition from messing up their duopoly of power. The most obvious, of course, would be to require a runoff election any time a candidate doesn’t receive more than 50% of the vote. That is an option that is used in many states in the Southern United States, although it must be said that the historical reasons for those runoffs is rooted more in efforts to limit the political power of African-Americans than it was in a desire to ensure that the winning candidate was the one the received majority support. Even without this history, though, runoff elections cost the taxpayers money and, given the fact that they generally produce lower voter turnout than the General Election so one wonders just how representative the electorate that decides the election actually is compared to the one that had voted a months or so beforehand. Another solution would be some form of Instant Runoff Voting where voters rank candidates in order of preference rather than voting for a single candidate. In such a system, if no candidate receives a majority of votes, then the candidate with the fewest votes gets eliminated and his or her votes are distributed to the remaining candidates based on the second preference of the people who voted for the eliminated candidate, a process that continues until someone has a majority of the votes. This system is used in some selections in other parts of the world such as Australia. Personally, I have doubts about the system because I can easily envision a situation where there is only one candidate on the ballot that someone wants to vote for. Absent an option to give every other candidate a “zero” rank, such a system essentially requires someone to vote for someone they really don’t want to vote for.

In any case, though, there’s nothing preventing Maine from enacting either runoff elections or Instant Runoff voting. Indeed, such a system would seem to be in the interests of both major parties since it would likely ensure that one of them would end up having the candidate in the final two most of the time. There have been some proposals to introduce IRV to Maine, but they seem to die in the legislature without any real consideration, though. That suggests that the people of Maine are pretty much okay with the way things are working right now, and they don’t really mind the fact that the existence of a robust independent streak in state politics means that their Governors will often win with less than majority support. If they’re okay with it, then I’m not sure there’s any real reason to upset the apple cart.