Making of a Modern Major General

With “The Long, Blinding Road to War,” WaPo’s Rick Atkinson begins a three-part series on the military leadership in Iraq. This piece begins last March 26, when major combat operations were at their nadir, and a conversation behind a tent during the sandstorm that led to the infamous “tactical pause” with 101st Airborne commander Maj. Gen. David H. Petraeus. 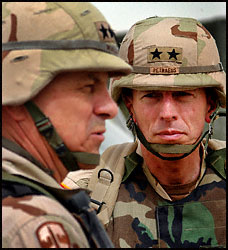 I was alarmed to see how troubled his blue eyes were. “This thing is turning [bad],” he said. “The 3 ID” — the 3rd Infantry Division, fighting just ahead of the 101st around Najaf — “is in danger of running out of food and water. They lost two Abrams and a Bradley last night, although they got the crews out. The corps commander sounds tired.”

A scheme to parachute the 82nd Airborne Division into the Karbala Gap — the Army’s preferred gateway to Baghdad — had evaporated. Two battalions had their jump gear rigged and ready at Kuwait International Airport, but the proposed drop zone was discovered to be perilously rocky; also, it was uncertain that ground reinforcements would reach the paratroops in time to forestall substantial casualties. Instead, the 82nd would be used to secure besieged supply routes in southern Iraq.

Petraeus noted that because of Turkey’s opposition, the Pentagon had finally abandoned all hope of pushing the 4th Infantry Division into northern Iraq through Turkey. The flotilla of ships carrying the division equipment would sail from the Mediterranean through the Suez Canal, around the Arabian Peninsula, and up the Persian Gulf. “You know how long that will take,” Petraeus said.

U.S. forces had yet to encounter the Republican Guard, but Iraqi irregulars seemed much more aggressive than anticipated and the Shiite south, contrary to expectations, had hardly welcomed the invaders as liberators. The battlefield was what soldiers call nonlinear, with only a vague distinction between the front and the rear.

“No one really saw this coming, did they?” I said.

“No,” he replied. No prewar estimates had anticipated a defense of Najaf by Iraqi regular army or Republican Guard troops, nor did those estimates predict stiff resistance from paramilitary forces. “We did worst-case scenarios, where the enemy really put up a fight, but no one took it very seriously. We need to get lucky. The CIA really needs to pull one out.”

For the first time since the war began on March 20, it was evident that senior battlefield generals believed that the campaign was developing in unexpected and disturbing ways. Capturing or killing Iraqi President Saddam Hussein seemed a wan hope at the moment, and I said as much. Petraeus agreed. “Hell, we couldn’t find Noriega for four days in a country that we owned,” he said, referring to the frustrating hunt for the strongman Manuel Antonio Noriega in Panama in 1989.

That brief episode in the Iraqi desert marked a key moment in the making of a combat general. Then 50 years old, Petraeus belonged to a small brotherhood of senior commanders who first joined the service at the nadir of the Vietnam War, then endured a battered and disheartened postwar military, and now had inherited leadership of the armed forces when the nation seemed to need its Army more than at any time since World War II. After a quarter-century of keeping faith and learning the art of command, their hour had come around — in Afghanistan, in Iraq, and on whatever battlefields seemed sure to follow.

Although he had been a soldier since reporting to West Point at age 17 in July 1970, and had served in Haiti and Bosnia, Petraeus had never seen combat before. As an embedded reporter who spent virtually all day, every day at his elbow, I was able to witness the anxieties and perturbations, the satisfactions and enormous responsibilities of commanding 17,000 troops under fire. Even for someone who had spent a lifetime around the U.S. Army — my father was a career officer — this vantage point was uniquely intimate. I watched Petraeus and his subordinates wrestle with a thousand tactical conundrums, from landing helicopters in a dust bowl to capturing several large cities.

The early trepidation seems almost comical now, given the relative ease with which the initial operation finally went–affecting regime change in a mere 21 days.

This episode is interesting as well:

Perhaps the most remarkable test of his luck and physical rigor came on Sept. 21, 1991. Shortly after taking command of a battalion in the 101st, Petraeus was watching an infantry squad practice assaulting a bunker with live grenades and ammunition. Forty yards away, a rifleman tripped and fell, hard. Petraeus never saw the muzzle flash. The M-16 round struck just above the “A” in his uniform name tag on the right side of his chest, and blew through his back. Had it hit above the “A” in “U.S. Army,” on the left side over his heart, he would have been dead before he hit the ground.

He staggered back and collapsed. Standing next to him was Brig. Gen. Jack Keane, the assistant division commander, who by 2003 had become the Army’s four-star vice chief of staff.

“Dave, you’ve been shot,” Keane told him. “I want you to keep talking. You know what’s going on here, David. I don’t want you to go into shock.”

Keane later described the day for me. “He was getting weaker, you could see that. He said, ‘I’m gonna be okay. I’ll stay with it.’ We got him to the hospital at Campbell and they jammed a chest tube in. It’s excruciating. Normally a guy screams and his body comes right off the table. All Petraeus did was grunt a little bit. His body didn’t even move. The surgeon told me, ‘That’s the toughest guy I ever had my hands on.’ ”

A medevac helicopter flew Petraeus, with Keane at his side, to Vanderbilt University Medical Center in Nashville, 60 miles away. “It was a Saturday and I was afraid the top guys wouldn’t be on duty. I had them call ahead to make sure their best thoracic surgeon was available,” Keane recalled. “We got off the helicopter and there’s this guy they’d called off the links, still in his golf outfit, pastel colors and everything.” It was Dr. Bill Frist, who a decade later would become majority leader of the U.S. Senate. More than five hours of surgery followed.

“Petraeus recuperated at the Fort Campbell hospital,” Keane continued, “and he was driving the hospital commander crazy, trying to convince the doctors to discharge him. He said, ‘I am not the norm. I’m ready to get out of here and I’m ready to prove it to you.’ He had them pull the tubes out of his arm. Then he hopped out of bed and did 50 push-ups. They let him go home.”