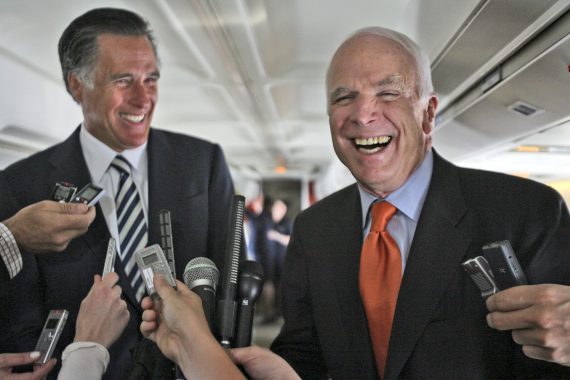 With the Iowa battle over, the Romney campaign is bringing out its big guns in New Hampshire, and that includes the guy who beat Romney in the Granite State four years ago:

DES MOINES — Senator John McCain of Arizona is expected to endorse Mitt Romney Wednesday in New Hampshire, giving the former Massachusetts governor a boost from one of the state’s favorite sons at a critical moment in the campaign.

Mr. McCain will travel with Mr. Romney on the candidate’s bus in the Granite State and will endorse his one-time rival, according to a person familiar with the campaign’s plans.

One of the stops for Mr. Romney on the New Hampshire tour Wednesday is at the Peterborough Town House, one of Mr. McCain’s favorite places to hold town hall meetings when he was a candidate for president.

New Hampshire fell in love with Mr. McCain twice — once in 2000, when it gave him an upset win over George W. Bush, and again in 2008, when he dashed Mr. Romney’s hopes of winning the nomination.

Mr. McCain is just as fond of New Hampshire as its voters are of him, and one Republican strategist said the timing of the endorsement — at the beginning of the race for the state — was a logical choice for the campaign.

But in other ways, the endorsement could be considered a surprise. The two men — Mr. McCain and Mr. Romney — clashed repeatedly during the 2008 campaign and were not thought to like each other very much.

Surprising or not, it does make sense. McCain would seem unlikely to back Gingrich, and he’s never been comfortable with the social conservatives that congregate around Santorum. At the very least, this endorsement could help solidify Romney’s position in New Hampshire against a possible Santorum surge. However, it could also help him in states like South Carolina where McCain’s military ties served him well in 2008.

I would suspect this is only the beginning of the big endorsements that the Romney campaign will be rolling out in the near future.