Mike Huckabee: I’ll Drop Out If I’m Not In The Top Three In Iowa

Mike Huckabee says he'll drop out if he doesn't finish in the top three in Iowa. He should probably start packing his bags now. 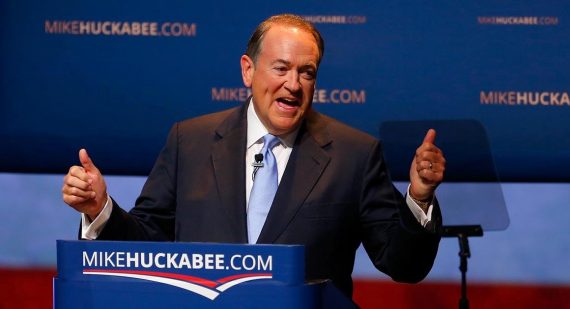 Former Arkansas Governor Mike Huckabee, who surprised many by winning the Iowa Caucuses back in 2008 but was never able to translate that into a viable campaign anywhere else in the country, says he will drop out of the race if he doesn’t finish in the top three in the Hawkeye State:

It’s Iowa or nothing for Mike Huckabee.

The former governor of Arkansas — who’s been a long-shot candidate relegated to the undercard primary debates during the 2016 presidential campaign — told Iowa radio host Simon Conway on Wednesday night, “If we can’t come within striking distance of the victory or win it, then I think we recognize that it’s going to be hard to take that onto the other states.”

Conway, whose program airs on Des Moines AM station WHO, asked whether there is a specific number that Huckabee wanted to hit in order to stay in the race.

“Well, I mean historically, we’ve always said there are three tickets out of Iowa, you have to come in No. 1, 2 or 3. I think in many ways that’s probably still the case,” he said.

“It may be that if you’re a close second or a close third, that’s very good. If you’re a distant third, then maybe there’s not a way to go on. I think you have a good hard look at it after Iowa.”

If the current polling is any indication, Huckabee may as well start planning for an exit now. In the most recent poll out of Iowa he’s tied with three other candidates — Jeb Bush, Rand Paul, and Carly Fiorina — with 2% support, an he hasn’t polled above 3% in the Hawkeye State since the summer before the campaign really began. In the polling averages, Huckabee is tied in eighth place with Chris Christie at 2.0% at RealClearPolitics and in ninth place with 2.2% in Pollster’s average. By way of comparison, eight years ago, Huckabee was polling well ahead of Mitt Romney in Iowa with an average of 30.0% compared to Romney’s 24.7% in Iowa on December 24, 2007. Of course, at that time Iowa was roughly a month earlier than it is this time around but even taking this into account, Huckabee is vastly underperforming from where he was in 2008. On November 24, 2007, Huckabee was just seven points behind Romney in the polling average and just beginning the rise in the polls that would send him to what ultimately ended up being a narrow, but still impressive, victory. (Source) Based solely on his current numbers, the odds that Huckabee will have the kind of quick turnaround in January that would vault him into the top three in Iowa are exceedingly low.

For a candidate who finished in first place in the caucuses in 2008, and was polling quite strongly in early polling back in 2011 before ultimately deciding not to run for President during the 2012 cycle that’s quite a fall, but it isn’t unexpected. When Huckabee ran in 2008 he was arguably the only viable candidate appealing to the evangelical wing of the Republican Party, which is a powerful force in Iowa and has only become more powerful in the intervening time. This time around, though, there are several other candidates who are making legitimate claims for the same voters that Huckabee largely monopolized eight years ago, including Ted Cruz, Marco Rubio, and Ben Carson, all of whom are out-performing Huckabee substantially. In this kind of environment, it’s not surprising that voters in Iowa would not necessarily flock around Huckabee the way they did in 2008.

Huckabee isn’t the only former Iowa Caucus winner who seems destined to do badly in that state this time around. Rick Santorum, who narrowly won the Caucuses in 2012, stands in eleventh place with a polling average of under 1% in the RealClearPolitics for the state, and at twelfth place in the Pollster average. Unlike Huckabee, Santorum hasn’t said anything about his plans if he doesn’t at least make some kind of credible showing in Iowa, but a bad performance there would seem to put him in the same position as the former Arkansas Governor, for largely the same reason. In fact, I wouldn’t be surprised to see Santorum join Huckabee, and probably several other candidates, leave the race after Iowa and New Hampshire show that they don’t have a viable campaign. The winnowing of the field hasn’t happened as quickly among Republican candidates as it has in past campaigns, but it will most assuredly happen.