Mike Huckabee Leads In Iowa, And That Shows What’s Wrong With The Iowa Caucuses 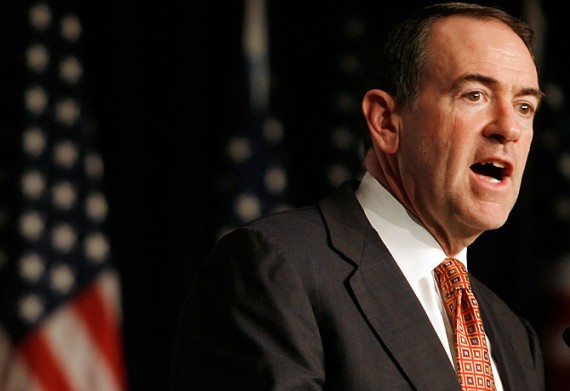 Polling Presidential races more than two years before Election Day is, as I’ve noted several times in the past, usually not nearly as important as the media organizations that publicize the polls make them out to be. Nobody has actually entered the Presidential race on either side of the ticket, many of the potential candidates are people that, notwithstanding their constant appearances on cable news networks, are largely unknown to voters on the ground, and there’s been virtually no real campaigning of any kind. That being said, polling that is conducted this early is instructive to the extent that it reveals what the kind of voters may be heading to the polls, or the caucus locations, once the primaries actually start in early 2016. For that reason, a new CNN/ORC poll that shows former Arkansas Governor Mike Huckabee leading the prospectively Republican field tells us much about the voters who will decide who wins the first contest of the cycle:

On the Republican side, Mike Huckabee nearly laps the field with 21% of all registered Republicans contacted in the poll saying they would support the former Arkansas governor if the 2016 Iowa caucuses were held today.

Paul Ryan is second with 12%, and there is a cadre of politicians — including Sen. Rand Paul, former Florida Gov. Jeb Bush and New Jersey Gov. Chris Christie — with support in the single digits.

Huckabee and Ryan are getting similar support with men — 15% and 16%, respectively — but it is with women that the former Arkansas governor jumps ahead of the congressman.

Huckabee, of course, won the 2008 Iowa Caucuses by more than 10,000 votes, a victory that for a short time propelled him into the ranks of top tier candidates in the GOP field, although that quickly ended when he was unable to parlay his victory in Iowa into success in South Carolina or any other state quickly enough to stop the McCain juggernaut. For a time, the former Arkansas Governor was at or near the top of polling in advance of the 2012 Presidential election until he ultimately decided not to run, in no small part it seemed at the time because he was rather enjoying the radio show and weekend Fox News Channel show he had at the time. While it’s been nearly eight years now since Huckabee ran for public office, and even longer since he last held public office, polling like this indicates that he still holds some sway with the evangelical Christians in Iowa that propelled him to victory in the caucuses, and that these voters will likely have much to say about who ends up coming out of Iowa with the “first in the nation” victory.

If nothing else, this is yet another reason why it is fundamentally absurd for the Presidential election process to start in Iowa, especially given the way that they conduct elections. Iowa is about as unrepresentative of the nation as a whole as you can get, for example. According to the 2010 Census, the population of the state is 91.3% white, 2.9% African-American, 1.9% Asian, with the remaining 3.9% being divided among a number of different ethnic groups. No doubt, the Republican electorate in Iowa is even more white than the Republican electorate nationally. The state is also not representative of the nation as a whole when it comes to income, level of education, or professions. Nonetheless, this is the state that, along with New Hampshire, is given priority by both parties in the primary process and which has been known to end a Presidential campaign before it started. Indeed, there hasn’t been a person elected President in recent memory who has not won either the Iowa Caucus or the New Hampshire Primary, if not both. Unlike New Hampshire, though, Iowa utilizes an election process that seems designed to make the result even more unrepresentative than it would be under a primary:

One of the unstated truths of political campaigns is that you can win an election by discouraging people from voting nearly as easily as you can by convincing people to get out to the polls and vote for you. Sometimes, this is done nefarious means such as the various attempts we’ve seen to trick certain voting blocs, usually minorities, that Election Day isn’t on the it actually is (a tactic that I personally can’t believe anyone is dumb enough to fall for), sometimes it’s done just by hoping that it rains or snows in a particular part of the country or state on the day votes are being cast, thus making it less likely that certain voters will turn out to vote.

When you’re dealing with caucuses versus primaries, the impact can be more easily seen. A caucus that’s held starting at 7pm on a weeknight in the middle of winter is obviously going to draw far fewer voters than a primary where the polls are open for twelve to thirteen hours a day and where voters have an opportunity to vote absentee if they aren’t going to be able to make it to the polls on primary day (as Ed Morrissey recently discovered in Minnesota, there is no such thing as absentee voting in a caucus).  Turnout for a primary is often low to begin with, but turnout for a caucus is even worse. Many people don’t have the time to spend two or three hours on a work night sitting in a school gymnasium, firehouse, or meeting hall going through the often tedious process that ends with the (non-binding) straw poll that the cable news networks breathlessly report as the results of the caucus. This is especially true for people who work late, or have children. Those who do are going to tend to be older than the electorate as a whole and more committed to a particular candidate than many other voters might be. This is why candidates like Rick Santorum, Ron Paul, and before them Pat  Robertson tend to do well in caucus scenarios and poorly in primaries. A committed ideological core in a caucus state can have a far greater impact than in a primary because the people who attend are older, more ideologically committed, and in the case of Republican voters, more conservative than the electorate as a whole. How this helps the party choose a nominee representative of the party that is likely to win in November is beyond me.

So, no, this poll showing Mike Huckabee leading among Republicans in Iowa doesn’t necessarily show that he’d be a strong candidate in 2016, assuming he even ran which seems unlikely at this point. What it does show is how absurd it is that we are starting our Presidential nomination process in an absurdly unrepresentative state like Iowa using an electoral process that seems better suited to picking a Homecoming King and Queen at the local High School than a President of the United States.