A New Jersey judge, along with a Judge in Pennsylvania, is among the first to rule on the meaning of the 'natural born citizen' clause. 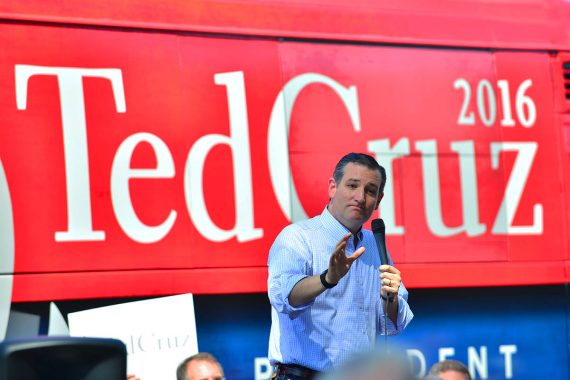 In what may be one of the first judicial rulings to directly get to the merits of an argument regarding the Constitution’s requirement that the President be a “natural born citizen,” an Administrative Law Judge in New Jersey has ruled that Texas Senator Ted Cruz is indeed a “natural born citizen” and rejected efforts to have him removed from the ballot:

Republican presidential candidate Ted Cruz is a “natural-born citizen” under the U.S. Constitution and therefore can run in the June 7 New Jersey primary, a state administrative law judge said Tuesday.

“The more persuasive legal analysis is that such a child, born of a citizen-father, citizen-mother, or both, is indeed a ‘natural born citizen’ within the contemplation of the Constitution,” Administrative Law Judge Jeff Masin wrote.

A group of New Jersey residents and a Catholic University of America law professor insisted that Cruz, born in Canada to an American mother and a Cuban father, did not meet the constitutional requirements to be president

The issue now goes to New Jersey Secretary of State Kim Guadagno, who will make a ruling that can be appealed in state court. Guadagno is also lieutenant governor.

Masin wrote in a 26-page decision that the issue of whether a child born outside the U.S. to an American citizen is eligible to be president ”can never be entirely free of doubt, at least barring a definitive ruling” of the U.S. Supreme Court.

“Absolute certainty as to this issue is only available to those who actually sat in Philadelphia and themselves thought on the issue” even after “having weighed the arguments as they are presented by those trying to understand the framers’ intent,” the judge wrote.

Similar arguments have been rejected in Pennsylvania, where Cruz — a U.S. senator representing Texas — will appear on the state’s primary ballot on April 26.

Tuesday’s decision could be key for Cruz. New Jersey’s Republican primary is often an afterthought in presidential races, because it falls so late on the election calendar.

But the Garden State — which awards all 51 delegates to the winner of the GOP primary — could be crucial this year. Republican front-runner Donald Trump is aiming to accumulate 1,237 delegates and assure a first-ballot nomination at the Republican National Convention in Cleveland in July.

Trump currently has 743 delegates, followed by Cruz with 545.

Trump — who was a top figure in the “birther movement” questioning whether Hawaii-born Barack Obama was eligible to be president — has been one of the leading voices questioning Cruz’s citizenship.

“There’s a big question mark on your head,” the billionaire businessman and former Atlantic City casino mogul said at the January GOP debate in South Carolina. ”You can’t do that to the party.”

Judge Masin relied considerably on legal scholar Michael Ramsey’s excellent recent article on this subject. Prof. Ramsey has put up a thoughtful post about the decision at the Originalism Blog (a blog which is also cited in the opinion).

While Judge Masin relies almost entirely on originalist arguments, living constitutionalists have every reason to support his conclusion. Quite simply, there is no good living constitutionalist reason to interpret the “natural born citizen” requirement in a narrow way that would exclude people who have been American citizens since birth, but happen to have been born abroad. Even nonoriginalist critics of Cruz’s eligiblity generally rely on on originalist arguments rather than trying to justify their position based on living constitutionalism. That is likely because there is no plausible reason to conclude that barring this category of citizens from running for the presidency benefits the nation in any way. Some of them are likely to be bad candidates, unfit for office. But the same thing can be said of numerous candidates born within the US. A least in the absence of an unequivocal textual requirement to the contrary (such as the rule that the president must be at least thirty-five years old), living constitutionalists should not interpret the Constitution in a way that categorically excludes large categories of citizens from eligibility for our highest office.

This ruling is the second decision on Cruz’s eligibility. It follows in the footsteps of an an earlier Pennsylvania ruling that reached the same conclusion. But the New Jersey decision includes a more thorough analysis of the arguments on both sides.

Along with the Pennsylvania ruling, this is one of the first rulings on the meaning of this part of the Constitution by any American court. When the issue was brought up previously, especially during the height of the ‘birther’ controversy that followed President Obama until he finally definitively settled the matter by providing a Certified Copy of his birth certificate back in 2011. For the most part, those cases were dismissed either because the Plaintiffs bringing the action lacked standing, because the courts to whom the claim was made held that they lacked jurisdiction for one reason or another, or because the attorneys who had drafted the pleadings were so incompetent that they were unable to frame the argument in a manner that would get past the initial defenses that the party bringing the action lacked standing or that the Complaint failed to state a claim on which relief can be granted. In the case of this New Jersey ruling, though, and the Pennsylvania ruling from last month, the courts were dealing with direct challenges to Cruz’s eligibility to appear on the ballot filed by someone who is, at least in name, a candidate for the same office as Cruz, which may have been the only way to get past the standing question at all. In any case, while an Administrative Law Judge in New Jersey and a trial court Judge in Pennsylvania are hardly the last legal word in any Constitutional case, the fact that this is seemingly the first time anyone has reached the merits of the argument.

For the most part, both the Pennsylvania ruling and the New Jersey ruling adopt many of the arguments in favor of the proposition that Cruz is indeed a “natural born citizen” that I made when I discussed this issue more than a year ago, and which were raised in a Harvard Law Review article by noted Supreme Court litigators Neal Kaytal and Paul Clement several months before that. Namely, the Constitution made plain that there are essentially two methods of becoming an American citizen, either one is a citizen from birth or one becomes a citizen by going through the naturalization process. In its original form, the Constitution did not define citizenship at all, and instead left that to Congress to do through its powers under Article I, Section 8 of the Constitution.  The very first citizenship law passed by Congress in 1790 provided a number of circumstances under which someone was deemed to be a citizen at birth, one of  them being a situation where someone was born outside the United States to parents at least one of whom was a U.S. citizen. This was the state of the law until 1868 when the 14th Amendment was ratified and made clear that, with limited exceptions, every person born in the territorial United States was a citizen from birth, but still left to Congress the option of defining citizenship beyond that. By 1970, when Cruz was born, the applicable law provided that a child born outside the United States was considered a citizen from birth as long as one parent was an American citizen who had  lived in the United States for at least 14 years after her 14th birthday. Cruz was born in the Canada in December 1970, but his mother is an American citizen who had resided in the United States continuously until well after she had turned 28. Therefore, Cruz was clearly a citizen from the moment he was born or, as the Constitution calls is a “natural born citizen.”

These two decisions are unlikely to silence the birthers and the wingnuts, but they are clearly correct.

Here’s the opinion in Elliott v. Cruz, the Pennsylvania case:

And here’s the opinion in Williams v. Cruz, the New Jersey case: