Not surprisingly, there was very little about the President's jobs speech to write home about. 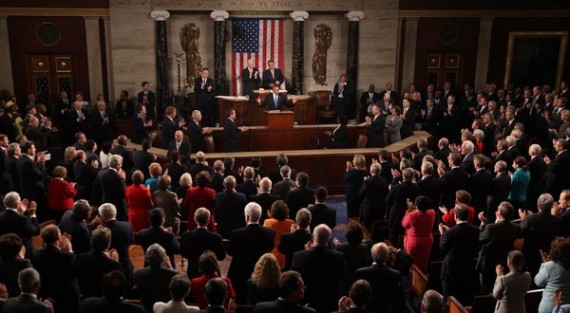 After a summer in which the economy seemed to slow down further week by week, President Obama told Congress last night that it needed to pass his $447 Billion jobs plan right away or he’d take his case to the American people:

WASHINGTON — Mixing politically moderate proposals with a punchy tone, President Obama challenged lawmakers on Thursday to “pass this jobs bill” — a blunt call on Congress to enact his $447 billion package of tax cuts and new government spending designed to revive a stalling economy as well as his own political standing.

Speaking to a joint session of Congress, Mr. Obama ticked off a list of measures that he emphasized had been supported by both Republicans and Democrats in the past. To keep the proposals from adding to the swelling federal deficit, Mr. Obama also said he would set his sights on a more ambitious target for long-term reduction of the deficit.

“You should pass this jobs plan right away,” the president declared over and over in his 32-minute speech that eschewed Mr. Obama’s trademark oratory in favor of a plainspoken appeal for action — and a few sarcastic political jabs.

With Republicans listening politely but with stone-faced expressions, Mr. Obama said, “The question is whether, in the face of an ongoing national crisis, we can stop the political circus and actually do something to help the economy.”

Though Mr. Obama’s proposals — including an expansion of a cut in payroll taxes and new spending on public works — were widely expected, the package was substantially larger than predicted, and much of the money would flow into the economic bloodstream in 2012. The pace would be similar to that of $787 billion stimulus package passed in 2009, which was spread over more than two years. Analysts said that, if passed, the package would likely lift growth somewhat.

While Republicans did not often applaud Mr. Obama’s plans, party leaders greeted his proposals with a degree of conciliation. “The proposals the president outlined tonight merit consideration,” Speaker John A. Boehner said in a statement. “We hope he gives serious consideration to our ideas as well.”

Ezra Klein summaries the plan, the details of which will not be fully released until a week from Monday, at which time it will be combined with a deficit reduction plan that, the President says, will pay for the entire cost of the bill:

– It completely eliminates the payroll tax for workers, which amount to a $175 billion tax break, and cuts it in half for businesses until they reach the $5 million mark on their payrolls, at a cost of $65 billion. The idea there is to target the tax cut to struggling small businesses, rather than the cash-rich large businesses. It also extends the credit allowing businesses to expense 100 percent of their investments through 2012, which the White House predicts will cost $5 billion.

– It offers $35 billion in aid to states and cities to prevent teacher layoffs, and earmarks $25 billion for investments in school infrastructure.

– It provides $49 billion to extend expanded unemployment insurance benefits. $8 billion for a new tax credit to encourage businesses to hire the long-term unemployed, and $5 billion for a new program aimed at supporting part-time and summer jobs for youth and job training for the unemployed.

– It also encourages the Federal Housing Finance Authority to make it easier for underwater homeowners to refinance their mortgages.

This is kind of a kitchen sink approach since it seems to include a little bit of every bit of Keynesian stimulus that one can come up with. There’s also a few things in there for Republicans to like, such as the Payroll Tax Cut extension, but the question for the President is whether there will be enough Members of Congress persuaded by the good to support the plan. The answer, of course, is that this is just the beginning. When the President says “pass this now,” he’s turning a campaign phrase meant to put pressure on Congress to act. The reality is that both Democrats and Republicans on the Hill are going to look at this plan and want to make changes to it, and that’s where the trouble will start.

So far, the reaction from Republicans is fairly muted. John Boehner said the plan “merits consideration.” Eric Cantor said that he expects that the House will take the elements of the President’s plan that have a realistic chance of passing the House and vote on them, rather than voting on the plan as a whole. House Freshman, meanwhile, are being rather muted in their immediate responses to the plan, perhaps in recognition of the fact that their response to the a jobs plan will play a prominent role in their re-election bids a year from now.

What’s going to complicate Obama’s plan, though, is the fact that he made it clear tonight that it would be tied to further deficit reduction and the negotiations of the debt ceiling deal Super-Committee, which started today. In his speech, the President stated that he would be presenting a proposal to pay for the plan by adding on to the automatic cuts that would need to cuts that are supposed to be considered by the Super-Committee. However, he seemed to suggest that this deficit reduction proposal would include some form of tax increases on “the rich,” something that will be a non-starter among House and Senate Republicans. So, instead of coming up with a jobs plan, it seems that what the President has really done is throw a monkey wrench into the Super-Committee that will guarantee either a return to the debt ceiling fight, or the imposition of the automatic cuts that were contained in the debt ceiling deal.

More importantly, by tying his jobs plan to the debt ceiling deal, the President may have inadvertently guaranteed that his plan won’t pass and doomed the Super-Committee:

Obama did not spell out exactly how he would pay for the measures contained in his nearly $450 billion American Jobs Act, but said he would send his proposed specifics in a week to the new congressional supercommittee charged with finding budget savings. White House aides suggested that new deficit spending in the near-term to try to promote job creation would be paid for in the future – the “out years,” in legislative jargon – but they did not specify what would be cut or what revenues they would use.

Essentially, the jobs plan is an IOU from a president and lawmakers who may not even be in office down the road when the bills come due. Today’s Congress cannot bind a later one for future spending. A future Congress could simply reverse it.

Currently, roughly all federal taxes and other revenues are consumed in spending on various federal benefit programs, including Social Security, Medicare, Medicaid, veterans’ benefits, food stamps, farm subsidies and other social-assistance programs and payments on the national debt. Pretty much everything else is done on credit with borrowed money.

So there is no guarantee that programs that clearly will increase annual deficits in the near term will be paid for in the long term.

If there’s anything the events of July taught us, it’s that Republicans aren’t going to stand for a program that increases the deficit in exchange for promised spending cuts a decade down the road that may never materialize. So, all this plan is likely to accomplish is to make the work of the Super-Committee more difficult and to guarantee that the “draconian” automatic cuts kick in when December rolls around. Personally, I don’t think that’s a bad thing, but there are plenty of people on Capitol Hill in both parties who are going to be upset if that happens, and even more upset if they whole deal got blown apart because of a “jobs bill” that looks for all the world like a campaign stunt.

In the end, though, this speech wasn’t about proposing something that Congress could actually pass. If that was the goal, then the President would be talking about sitting down with Republicans and coming up with a jobs plan. This is a campaign speech pure and simple, it was about firing up the base and trying to win back the independents. The proposals the President made last night were little more than rehashed versions of things that have been made for the past two years, some of which were actually passed into law in 2009 and failed to do much of anything to stimulate the economy. A few elements of the President’s plan, like the Payroll Tax Cut, might actually have a reasonable chance of passing simply because the GOP’s business friends like them and because the GOP clearly seems to recognize that they cannot afford to be overly obstructionist when it comes to proposals to alleviate the jobs situation. Other parts of the plan won’t survive, though, and when we wake up in September 2012 and the employment rate is still somewhere in the 9% range, President Obama will argue that it happened because Congress didn’t give him everything he wanted.

It may have looked like a State Of The Union Address, but this was the opening battle of the 2012 election campaign, and there’s only going to be more of it to come.