Will Ohio's Provisional Ballot's be 2012's version of the Hanging Chad? 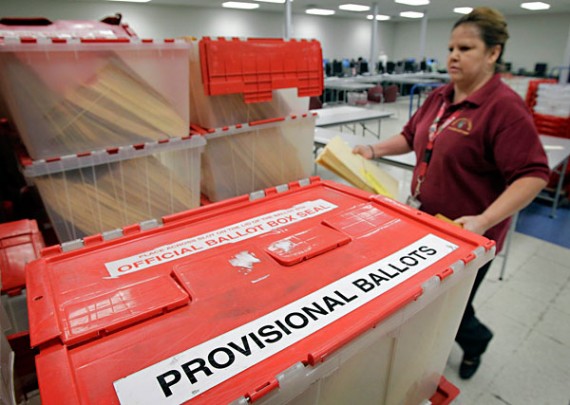 As I noted last week, there’s a quirk in Ohio’s election law that could result in the outcome of the vote in that state, and potentially a decision as to who the next President might actually be, unresolved for weeks. Essentially, the whole problem boils down to the decision by Secretary of State Jon Husted to send an application for an Absentee Ballot to every voter in the state, something that had not been previously done in Ohio. Husted’s office reported last month that some 1.4 million applications were returned, and each of the people who returned the application were sent a proper Absentee Ballot. In and of itself, there’s nothing wrong or wrongheaded about this. Indeed, one could argue that it makes voting easier for everyone. The problem is that, under Ohio law, when someone is mailed an Absentee Ballot there is a notation made next to their name in the voting rolls and, if they show up on Election Day, they will not be permitted to vote by the regular procedure and will instead by required to cast a provision ballot. The logic behind this is sound in that it’s the only method to ensure that someone who has voted by absentee doesn’t improperly, and indeed illegally.

The fly in the ointment here is that, under Ohio law, election officials cannot even begin counting Provisional Ballots until November 17th. How long this process goes on depends on a number of factors, not the least of them being how many Provisional Ballots actually end up being cast. In 2004, there were approximately 155,000 Provisional Ballots cast. In 2008, there were approximately 207,000 such ballots cast, some 40,000 of which were rejected under rules that continue to remain under dispute. Many elections officials and observers believe that the number will be much higher this year and, given the fact that as of a week ago some 350,000 Absentee Ballots remained outstanding, their fears appear to be well founded. In 2004, the election result between Bush and Kerry was close, but not close enough that the Provisional Ballots would’ve made a difference in the outcome. That may not be the case this year given how close the polls are, and both campaigns are getting for what may end up being a legal battle as epic as the one we saw in Florida in 2000:

Even before Tuesday’s voting began, the two sides were already skirmishing over how the balloting was being administered.

In Ohio, a new dispute has broken out over the validity of provisional ballots. Usually, such special ballots — cast by voters but set aside for examination later — are required when something about the voter’s eligibility is in doubt. For example, the voter might lack proper identification or be in the wrong precinct, or the person might have requested an absentee ballot but then showed up to vote in person at a polling place.

When examined in more detail later, provisional ballots are either discarded or, if the voter’s eligibility is established, counted.

The fight over those ballots has now increased the possibility that — if Tuesday’s election comes down to the Buckeye State, it won’t end on Tuesday night at all.

Instead, it might be weeks before Ohio has a final result. Voting rights advocates contend that a new directive issued Friday evening by Ohio Secretary of State Jon Husted improperly places the burden on voters — rather than poll workers — for accurately recording the form of identification on provisional ballots.

A group of unions and voting rights groups went to federal court Thursday asking that the state be made to reaffirm that commitment. A day later, Husted released his directive. The state is expected to respond before the end of Monday, but a decision may not come until after the election. Election boards have 10 days after the election to evaluate the eligibility of provisional ballots and decide whether to count them.

In its final projection before Tuesday’s vote, the Ohio Poll sponsored by the University of Cincinnati found the presidential race in Ohio too close to call, with Obama receiving support from 50 percent of probable voters and Romney getting 48.5 percent — within the poll’s margin of error of plus or minus 3.3 percent.

That represented no significant change from last week’s Ohio Poll, which gave Obama a two-point edge over Romney. A recent Columbus Dispatch survey also had Obama up two points.

On Tuesday night, parsing the early returns from Ohio could be confusing. In the first minutes after polls close, the state is likely to tally up the returns from early voting. These are expected to break heavily for Obama. After that, Romney should creep closer, since he is expected to do better among those who vote on Election Day.

And, even after that process is over, there could be a long recount if the vote ends up being close enough:

Ohio does not begin to tally provisional ballots and ballots from overseas and military voters until Nov. 17. During this 10-day period, voters can provide documentation to establish their eligibility, but election officials cannot open or count absentee or provisional ballots. In 2008, 80 percent of those votes ended up being accepted as legitimate, and they tended to slightly favor the Democratic candidate, Mr. Tokaji said.

Ohio counties then have an additional 10 days to conduct an official canvass of the vote. If at the end of that period the two candidates are within 0.25 percent of the overall vote total, an automatic recount is triggered. State officials expect about 5.7 million votes to be cast in the presidential election, meaning that if the margin is 14,250 votes or fewer, a statewide recount is required. Under state law, that cannot begin until Dec. 2 and must end by Dec. 11, six days before the state must qualify its representatives to the Electoral College. While much of the focus is on Ohio, the result could also come down to several other highly contested states, each with its own set of rules for counting or recounting votes.

So, a close vote in Ohio could draft things out for a considerable amount of time.

A Federal Judge has already set a hearing on the dispute over the standards that will be used to count the Provisional Ballots for Wednesday morning (since the ballots won’t be counted for ten days, there’s no need for an earlier hearing), but that may just be the beginning of the fight. How big a fight it actually is,of course, depends on how the voting goes in the rest of the country. If one of the candidates, and most likely it would be President Obama, reaches 270 Electoral Votes without including Ohio, then the dispute over Ohio’s Provisional Ballots becomes something of an academic concern unless those ballots would somehow play a role in deciding one the Brown-Mandel Senate race or one of the Congressional races. However, if we end up at the end of the night with a map that would require either one of these men to win Ohio’s 18 Electoral Votes to win the election, then we will likely find ourselves in a protracted legal dispute that could leave the fate of the Presidency in doubt for weeks. So, let’s hope either that whoever wins Ohio wins it by a wide margin, or that Ohio doesn’t matter in one of the candidates getting to 270, because I’m really not up for a repeat of the Florida debacle. 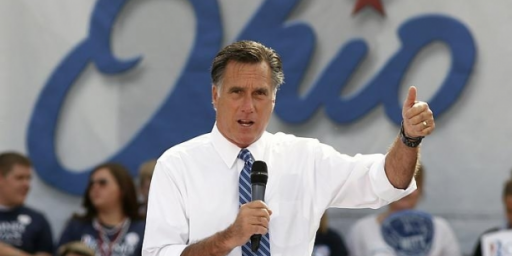 The Race Might Not Be Over On November 6th