The arguments in favor of major changes in the way we elect our President are unpersuasive. 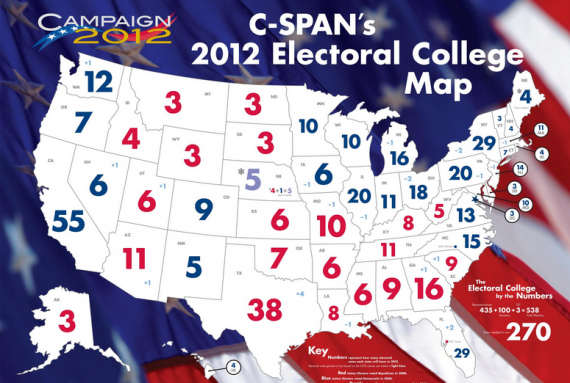 The possibility that the Presidential election could end in another split between the Electoral College and the Popular Vote as we saw in 2000, and as the nation saw three times previously in American history (and possibly in 1960 as well if you buy into this fascinating piece by Sean Trende) has lead, inevitably, to another round of reflection about the manner in which we elect Presidents here in the United States. The arguments against the Electoral College are, I think, well known at this point in time and don’t need to be repeated. In fact our own Steven Taylor has been writing about this issue extensively for years, most recently in this post, and he’s been a relentless critic of the Electoral College for some time.

As for myself, as I’ve noted here in the past I tend to support the continued existence of the Electoral College, with the modification that I would like to see the individual states adopt the District Method for allocation of electors as Maine and Nebraska have done. More importantly, though, I’ve found the arguments against the Electoral College to be lacking. If we were going to make a major change to the Constitution such as this, it ought to be for a very good reason, and I don’t think that the still unlikely possibility of a split with the Popular Vote, which has happened on an incredibly rare basis throughout American history, or the even less likely possibility of a tie, are sufficient reasons for such a major change. Given the fact that there was no major effort at reform after the 2000 election, I would suggest that the American people feel about the same about this. The Electoral College may not be perfect, but it’s not as all-fired imperfect as its critics tend to make it out to be either.

Over at National Review Daniel Foster lays out his version of the positive case for the Electoral College:

In short, the College reflects the formal and constitutional fact that the president is elected chief executive of a union of states — federated but sovereign — and not a conglomeration of people. The executive of the Constitution, of the Founders, is president of the United States, not president of America. Its detractors consider it an anachronism, but if federalism still means anything — and sadly, that’s something of an open question — then the College is as vital as ever. It affirms that we vote as citizens of the several states, not mere residents of arbitrarily drawn administrative districts.

The Founders designed the College this way in part to blunt the power of emergent factionalism. And it worked. In the words of Tara Ross, one of the College’s most able defenders, the current electoral system means that the president must secure the support of a broad coalition of “heterogeneous entities,” themselves “safe” factions “composed of individuals with a wide variety of interests.” Benjamin Harrison lost the popular vote to Grover Cleveland in 1888 because of the latter’s overwhelming strength in the South, but won the presidency with a coalition of states in the Northeast and Midwest and along the Pacific coast. Likewise, when Bush defeated Gore despite losing the popular vote, he did so while winning 30 states.

Foster also urges his fellow Republicans to hold their fire in the event that we really do get a result where Romney wins the Popular Vote but loses the Electoral College:

If President Obama is reelected without a popular majority, Republicans should, by all means, use this fact as leverage in negotiations over such matters as the “fiscal cliff.” They should blast the talking point until their collective faces turn blue. But they should not, under any circumstances, suggest that the president’s victory is anything less than incontrovertibly, unquestionably, unambiguously constitutional and legitimate. If prominent Republicans were instead to come out in favor of, for example, the National Popular Vote — a legally dubious conspiracy of eight-and-counting states to undermine the College by awarding their electoral votes to the national popular-vote winner — it would amount to a tactical tantrum with potentially disastrous long-term strategic consequences.

Foster’s argument is, at least to me, quite persuasive. It’s often forgotten in our modern era that the Constitution was never meant to create a purely democratic system of government.From the checks and balances and separation of powers in place between the various branches of government, to the separations between the limited powers of the Federal Government and the virtually unlimited, except by the Constitution itself, powers of the individual states, to the very existence of the United States Senate, the Constitution is full of provisions designed to blunt, or at least temper, political will. The Electoral College is one of those institutions. Originally, of course, the College was seen by the Founders as a way to keep the selection of the President as far outside control of voters as possible. Originally, in fact, there were drafts of the Constitution at the 1787 Convention that had the President being selected by Congress itself, a proposal that would have severely weakened the office and turned it into something resembling either a modern Prime Ministership or the Presidencies of most European nations, which (except for France) are largely ceremonial positions.

Over time, of course, the Electoral College changed its function as states abandoned the practices from the early days of the Republic that potentially made the actual votes cast on Election Day completely irrelevant, but that doesn’t mean it didn’t still have a purpose. As Foster says, the Electoral College serves to make Presidential elections truly national, requiring candidates to register support not just in the high population areas on the East and West Coasts but also in the interior of the nation where interests vastly different from those of the Boston-New York-Washington corridor and the San Francisco-Los Angeles-San Diego corridor motivate voters. It also reinforces whatever remaining strands of Federalism still exist in this country, thus challenging the idea that all wisdom must come from Washington.

Jonathan Bernstein, who comes from a completely different side of the political spectrum from Foster, disagrees with Foster’s rationale but makes his own argument for the Electoral College:

I’m mostly a marginal supporter of the Electoral College on other grounds, as regular readers may recall. For example, I like the Madisonian idea of overlapping but different constituencies for different offices. That case doesn’t depend on any mystical reading of state’s rights (why should I care that, as Foster points out, more states supported Bush than Gore? So what?). Instead, it goes back to the Framers’ problem that they wanted to listen to Montesquieu, but discovered that in their Republic there were no separate estates to represent separately. There were only — are only — people. Nothing to be balanced!

On top of that, I still believe that the interests which benefit from the electoral college are, on balance, those that are hurt by other factors in the overall system. Currently, the states helped appear to be medium-size competitive states (Ohio most of all, but Wisconsin, Colorado, Virginia and Pennsylvania are all in Nate Silver’s top ten tipping point states right now). It’s not as good as when California and New York were swing states, but it’s still a different set than are helped by the Senate.

And I tend to think that the chances of a “wrong” result are small enough that it doesn’t bother me – just as I’m not bothered by the chance that there will be a split between the overall vote and partisan control of the House of Representatives. If there was a persistent large EC bias, that would be a different story, but it’s usually under 1% and floats between the parties. If a “wrong” result happens in an otherwise very close race, I just don’t see a convincing democratic case against it.

Bernstein’s argument is the balance of power argument that you ordinarily hear from Electoral College proponents, and it does have its value. Notwithstanding the points that Steven Taylor has made in his posts on the topic, I believe it has value. It seems rather clear that, without the Electoral College, citizens in less populous states would find themselves and their interests largely ignored as candidates worked to garner votes from high population areas like the East Coast, the West Coast, and the South. Perhaps that would be “democratic” in some sense of the word, but it would do serious damage to the idea of the United States as a united Federal Republic.

As I noted above, though, the arguments in favor of the Electoral College strike me as being far less important than the arguments against it. The advocates of eliminating the Electoral College are proposing what is, without a doubt, a radical change to our Constitutional structure. Potentially, it would have a significant impact on the relationship between the Federal Government and the states regarding the question of who exactly is the final authority when it comes to deciding the outcome of an election. It also poses potential problems of its own in the event of the admittedly rare circumstance in which an election is close enough that challenging the results is considered an option. Who is the final arbiter in those situations? Under our current system, it’s the states Bush v. Gore notwithstanding. In a Popular Vote system, would the provisions of the Constitution that give states the authority to regulate the “time, place, and manner” of elections even survive? I have serious doubts that it would, and then you end up with a Federal election bureaucracy. Finally, none of the complaints that Electoral College opponents make strike me as being sufficient to scrap a system that has been around for 220-odd years. Like Bernstein, I think the chances of a “wrong” result (and how do you define “wrong”?) are so small as to be infinitesimal, which means that I see no reason to support calls for what would be a major change to our Constitutional system.