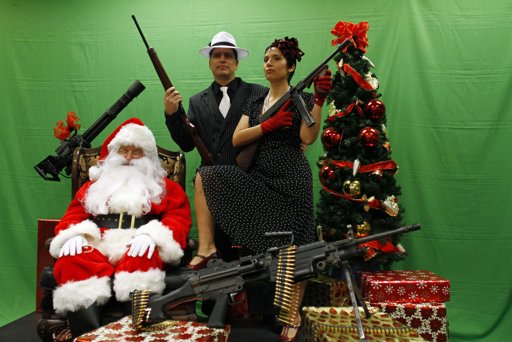 Second: Miss Wisconsin – “Thanks to Obama and Holder, Santa WILL be getting us what we want for Christmas”

Third: John Burgess – All I wanted for Christmas was my .22 with teeth. But then, I wondered, “Why not upsize? Santa’s paying for it, after all…”

Jc – Coming to a theatre near you – Santa Claus, in “The war on Christmas 2 – This time it’s personal

Vast Variety – Kirk became distressed and realized he must have left behind a copy of the “Twas the Night Before Christmas” when the Enterprise received this Christmas greeting from Sigma Iotia II.

David Gregory has been a very bad boy.

Thanks to the NRA, no mall Santa’s will be mauled Santa’s this year.

“You’ll shoot your eye out, Ralphie.”