The Sonny and Chair Edition OTB Caption ContestTM is now over.

The Sonny and Chair Edition OTB Caption ContestTM is now over. 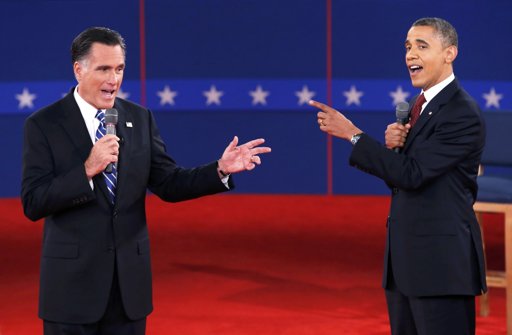 First: Samantha – I got you debt – in style of Sonny and Cher

Second: He who must not be named – So, which one’s Howard Keel and which one’s Betty Hutton?

Third(tie): Jeremy – The precise moment at which the candidates realized they had each other’s ties.

jd – R: “Why did the battle group cross the Persian Gulf?” O: “Ahhh, I think we’ve heard that one before!”

CSK – The debate audience was startled, but greatly entertained when Dino and Sammy substituted for Mitt and Barack

physics geek – Obama: “I can’t believe he actually pulled my finger!” Romney: “Man, that one gets me every time.”

Maggiemama – Somebody teach these guys the correct way to play “rock, paper, scissors”.

John Burgess – “Talk of ineffective… he’s still trying to get someone to pull his finger.”

But the best re-write of “I Got You Babe” goes to ‘cathymv’ who posted the below in Someone else’s caption contest
(Romney)
He says we’re mean and out of touch
but he doesn’t work and blames Bush way too much
(Obama)
I play golf in my own backyard
cause Presidenting turned out to be real hard
Babe
I got you babe, I got you babe
(Romney)
I say high taxes won’t pay the rent
with your deficit it won’t even make a dent
(Obama)
It was fun, I thought it would last
But now I’m looking to be on the Jersey Shores cast
(Romney) I got plans for the White House
(Obama) Just make sure, you de-louse
(Romney) I’ll get rid of Obamacare
(Obama) I got a lock of bin Ladins hair
I gooooot you babe!!!

The Thursday Contest has already been dipped.