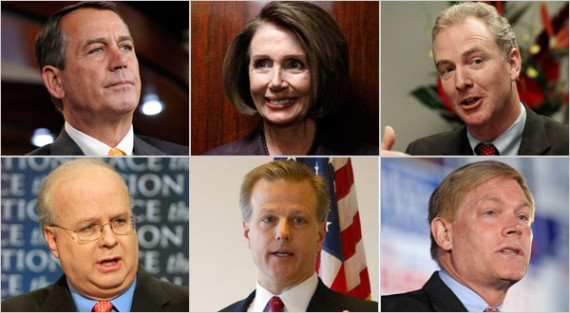 The presentation was the product of a strategy session held 11 days before Mr. Obama’s inauguration, when top Republican leaders in the House of Representatives began devising an early blueprint for what they would accomplish in Tuesday’s election: their comeback.

How they did it is the story of one of the most remarkable Congressional campaigns in more than a half-century, characterized by careful plotting by Republicans, miscalculations by Democrats and a new political dynamic with forces out of both parties control. The unpredictable Tea Party movement, the torrent of corporate money from outside interests and an electorate with deep discontent helped shift the balance of power in Washington.

In their quest to reach a majority, the Republican leaders imposed tough party discipline, warning incumbents that the party would no longer act as a “welfare state” for those who were lax fund-raisers. They began an aggressive recruiting effort for top-flight candidates in districts that seemed to be virtually owned by some of the longest-serving Democrats in the House. And they were keenly aware of the anti-establishment mood, rarely engaging with Tea Party challengers, as Senate leaders did, fearful that any efforts to influence primary races could backfire.

Improbably, Mr. Boehner’s team turned the notion that Republicans could not afford to be the “Party of No” — or, in his words, the party of “Hell no” — on its ear, successfully portraying it as a virtue in the face of Mr. Obama’s legislative priorities. But even that team never predicted the sort of victory they experienced Tuesday night.

It goes on like this for a very long time, taking three separate Web pages to finish.   And it’s compelling and, presumably, accurate.

But here’s the thing:   A shrewd strategy and disciplined tactics only get you so far in politics.   But the bottom line is that the 2010 election, like virtually every other election in American history, was mostly a reaction to the state of the economy rather than campaign maneuvers. John Sides:

Economic performance explains some large fraction of the variation in presidential election outcomes, presidential approval, trust in government, and many other things. But most political journalism ignores this fact and prefers to talk about tactics and narrative.

Case in point: how many of the 15 “political experts” writing in the New York Times’sforum on “how Obama can rebound” emphasized the simple fact that the economy is weak and so Obama will not rebound significantly until it turns around? One. Mark Blumenthal. The rest wrote about policy hobbyhorses, strategery, and a bunch of other stuff that could matter “at the margins” but probably won’t, and certainly won’t matter as much as economic performance over the rest of his term.

In Congressional elections, candidates matter to some extent.  Open seats are more difficult to defend, so an incumbent party hit with a wave of retirements will tend to be hurt in November.  Challenger quality matters, so a party that does a good job of recruiting a solid crop of candidates (as the Democrats did in 1974 or the GOP in 1994) will be better off than one that doesn’t (such as the Dems in 2002).

In other words, yes, there are systematic things that matter in elections in addition to the economy.  The point is that when we talk about elections (or, perhaps, presidential popularity) to look to those things first.

Similarly, the Democrats should expect to lose seats this November because of the big, systematic factors — the biggest and most obvious of which is just that they’ve done so well in the House recently that they’re defending lots of marginal seats, and have very few marginal seat targets.

There’s a very strong, and really understandable, urge for us to believe that the day-to-day stuff matters to election outcomes: the gaffes, the debates, the ads, the strong speeches, the policy proposals.  And sometimes they do!  Mostly, though, they don’t, or they matter just on the margins.  As I’ve said many times, that doesn’t mean that the ephemera of campaigns shouldn’t be reported (and it may in fact be important to what pols do once they’re elected, even if it doesn’t sway voters).  It just should be reported in context.

Both those posts, incidentally, were written in July.

The horrible  economy, frustration over the bailouts (which were, at the end of the day, bipartisan with Bush having done two before Obama’s), and other factors set the stage for a Republicans to take substantially more seats than out parties typically do in a midterm cycle.   So did the fact that Democrats held dozens of House seats they had no business holding (in terms of the ideological preferences of the constituency) after backlash elections in 2006 and 2008.

In terms of strategic management, the Republicans likely slightly outperformed structural expectations in the House and slightly underperformed them in the Senate. Mostly, because candidate selection matters more in a statewide race than in a small district.

Indeed, Republicans are kicking themselves for “leaving some on the table,” with the Tea Party and Establishment wings pointing fingers at each other.

With tea party-backed candidates going down in Delaware, Colorado and Nevada, depriving Republicans of what would have been a 50-50 Senate, a bloc of prominent senators and operatives said party purists like Sarah Palin and Sen. Jim DeMint (R-S.C.) had foolishly pushed nominees too conservative to win in politically competitive states.

Movement conservatives pointed the finger right back at the establishment, accusing the National Republican Senatorial Committee of squandering millions on a California race that wasn’t close at the expense of offering additional aid in places like Colorado, Nevada and Washington state, where Democratic Sen. Patty Murray holds a narrow lead as the votes continue to be counted.

Former Senate Majority Leader Trent Lott put it plainly: “We did not nominate our strongest candidates.”  Had Republicans run Castle in Delaware and establishment favorites Sue Lowden in Nevada and Jane Norton in Colorado, Lott said, Tuesday would have turned out different.

Both sides are likely right here:  The Tea Party propelled some really bad candidates in races in Blue and Purple states, making victory much harder.  But the RNC did likely waste money fighting races that were far less close.